Skip to content
HomeHealth NewsWhat is the Nordic diet? The surprisingly affordable lifestyle

What is the Nordic diet? Surprisingly affordable, full of fish, with fewer additives: Why nutritionists are going wild for it

The Mediterranean diet has been shown, unequivocally, to boost brain power, fuel metabolism and lower disease risk better than any fad on the market.

But there is another lifestyle that nutritionists are touting, endorsed by the World Health Organization: the Nordic diet.

It is based on produce from Scandinavia – a region with far better health than the US and the UK – including herbs, fish, root vegetables, berries and whole grains.

The key that most excites nutritionists, though, is its emphasis on planning all your meals around what vegetables it consists of, rather than adding vegetables to meat.

Nordics also learn to eat seasonal produce, which tends to be fresher with fewer additives.

Eating ‘clean’ can be incredibly difficult for lower income Americans, who often live in ‘food deserts’, and fish is on the pricier end of produce.

However, top nutritionists say the Nordic diet is, somewhat surprisingly, a good option: its primary vegetables (broccoli and cabbage) are usually affordable, canned fish counts, and so do frozen berries. 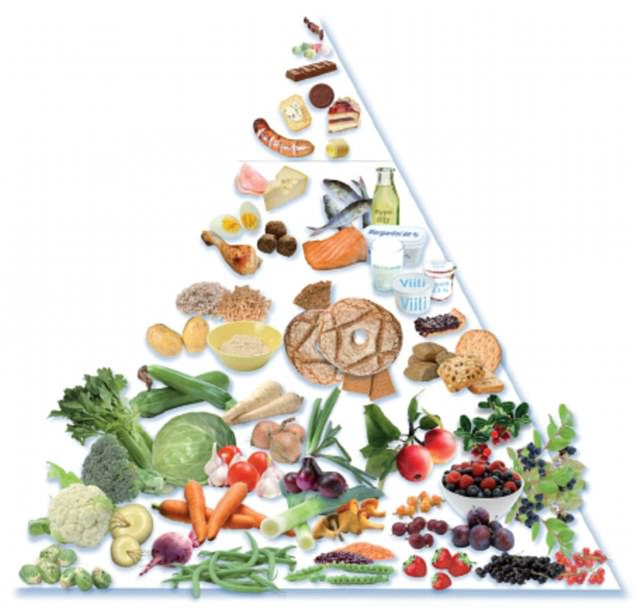 Eating ‘clean’ can be incredibly difficult for lower income Americans, who often live in ‘food deserts’, and fish is on the pricier end of produce. But nutritionists say the Nordic way is a good option

WHAT IS THE NORDIC DIET?

The diet is based on the Nordic region, emphasizing winter vegetables, freshwater fish, and berries.

You are meant to get the majority of calories from vegetables, then add other things – like eggs, meat, or fish – in moderation as an aside.

It follows the Baltic Sea Pyramid.

The pyramid lay out the essential principles of the Scandinavian lifestyle in order of priority – starting from its broad foundation at the bottom, going up to its small tip.

At the best is exercise and the value of eating meals with others.

After that is seafood, then poultry and eggs and cheese and yogurt, then finally meats and sweets.

A little wine here and there is fine, though that sits at the top too, and plenty of water is encouraged.

HOW DOES IT COMPARE TO THE MED DIET?

The two diets are very similar.

The clearest difference is in the oil: olive oil is the core of the Med diet, while canola oil (also known as rapeseed oil) is the heart of Nordic cuisine.

There are pros and cons to both. Olive oil has more antioxidants, but more saturated fats.

‘Just like olive oil, canola oil is high in monounsaturated fats, but it has a higher amount of polyunsaturated fats than olive oil,’ Amy von Sydow Green, MD, a nutritionist at Penn Medicine, and a proud Scandinavian, told Daily Mail Online.

‘Olive oil has a higher antioxidant level, which would make it a good oil to keep in rotation even if you’re transitioning to Nordic diet principles.

‘It’s important to know that canola oil has a higher smoke point than olive oil (200C/400F vs 160C/320F), so go for canola when you’re cooking at high heat, to avoid the development of free radicals and toxic compounds.’

The other main difference is that Nordic food is geared towards colder climates, than warmer ones.

‘The Nordic diet is based on foods that grow better in colder climates,’ Green explained.

‘That means, for example, it is high in kale, cabbage, Brussels sprouts and root vegetables, rather than tomatoes and peppers.’

4 NORDIC RULES TO IMPROVE YOUR DIET

In the Nordic diet, vegetables are the star of the show on the plate.

Americans tend to put the meat, fish or starchy element (like pasta) first, and dress it up with vegetables – or leave vegetables out completely.

In fact, 290 million Americans struggle to eat the daily minimum of fruit and veg.

2. Get to know what’s in season

These days, we can get most foods year-round, if we go to the right places.

Seasonal food, in theory, is grown, picked and sold at the peak of its season.

That means it tends to retain most of its health benefits, and has fewer growing agents.

It is also at the peak of its supply, so it is cheaper for farmers – and, therefore, cheaper for you.

3. Learn what ‘processed’ means – and cut it out completely

Those are all processed foods – as in, their nutrients have been diluted down.

Scandinavia is known for its fermenting. The first evidence of fermenting was found on the east coast of Sweden some time between 3000 BC and 6000 BC.

And it is still going strong.

From pickled fish to fermented dairy, there is an abundance of options.

Sweden has a kind of fermented milk called filmjölk, which is similar to yogurt.

In Iceland, there is a near-identical product called skyr.

‘The winter vegetables emphasized in the Nordic diet are often quite affordable: kale, cabbage and broccoli for example.’

2. Make a beeline for the freezer

‘Frozen vegetables and berries are a great choice, make sure you get the kind without anything added.

‘In the summer, berries are often on sale, get some and freeze!’

Try canned fish. Salmon, herring, mackerel and sardine are great choices! They will give you the healthy omega 3 fats you need for a low price. Frozen fish is a great choice as well.