Diagnosed with Parkinson’s at just 35: Woman who suffered bloating and put her inability to apply eyeliner down to clumsiness turned out to have incurable nerve disease

When Claire Jones, now 38, started suffering with stomach cramps, bloating and clumsiness she didn’t for a moment suspect she was suffering from Parkinson’s.

But after she noticed her hand trembling uncontrollably while she was training for the London Marathon in 2015, she knew it was time to see a doctor.

Ms Jones was diagnosed with a young onset of the incurable nerve disease which affects just one in 25,000 people.

Now she struggles to eat out in restaurants, cannot wear eyeliner and sometimes covers up her trembling arm with a scarf out of embarrassment.

The finance systems manager, from Leicester, says her illness makes it difficult for her to make new friends because others don’t understand the disease and think it just affects old people. 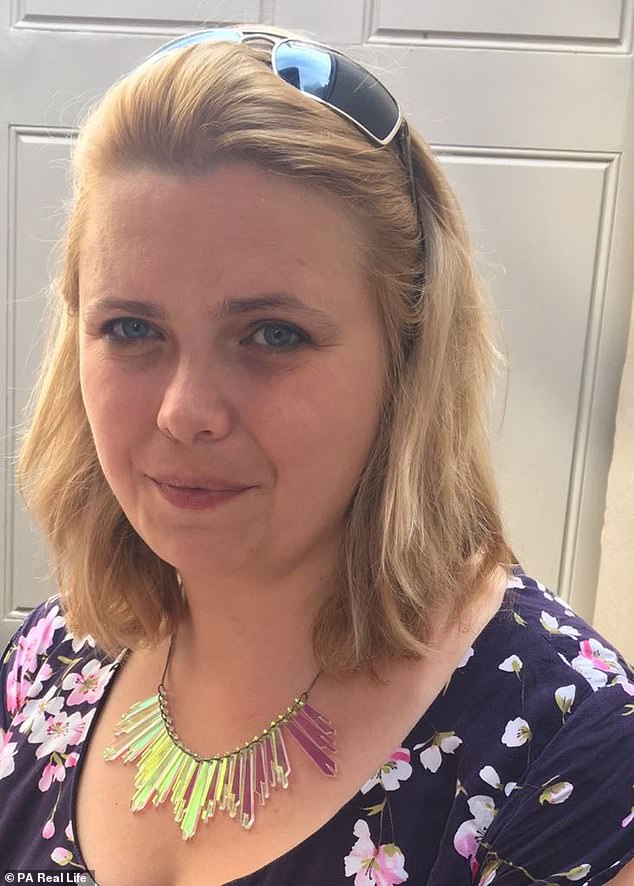 Claire Jones was diagnosed with Parkinson’s disease when she was just 35 years old – only around one in every 25,000 people are diagnosed with it before they’re 40

Just one in every 25,000 people develops the degenerative disorder of the central nervous system between the age of 30 and 39.

Parkinson’s causes progressive brain damage over a number of years, resulting in uncontrollable shaking of the body, slow movement and stiff muscles.

Although the illness itself is not terminal it can leave patients severely disabled and more vulnerable to infections.

Claire Jones was diagnosed when her left arm started shaking while she was training for the London Marathon in 2015.

After being diagnosed, she realised the stomach problems and clumsiness she had been experiencing for years had been early signs of the condition.

Ms Jones said: ‘I went through a period of grief. Sometimes it made me really angry and upset.

‘It is hard being a younger person with Parkinson’s, as it’s normally a condition associated with older people and pensioners. People don’t really understand. 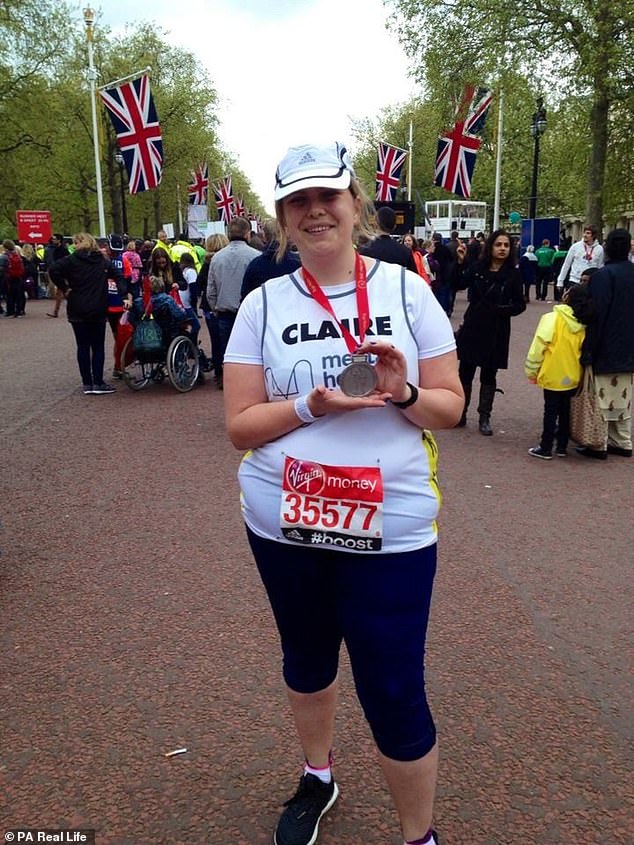 Ms Jones first realised there was something wrong when she was training for the London Marathon in 2015, when she noticed her left hand had begun to shake uncontrollably – she visited a GP and was soon diagnosed with the chronic nerve disease

‘There are good days and bad days. On a good day, you wouldn’t be able to tell, except for a slight tremor.

‘On a bad day, particularly when I’m very tired, there can be a whole raft of things.

‘Some of the worst symptoms are those that aren’t seen, though, like depression or having trouble finding words.’

WHAT IS YOUNG ONSET PARKINSON’S DISEASE?

In the US, around two to 10 per cent of sufferers are under 50, while just 1.2 per cent are in the UK. Parkinson’s is usually diagnosed in those over 60.

Parkinson’s in general affects one in 500 people, and around 127,000 people in the UK live with the condition.

It is a progressive neurological condition which destroys cells in the part of the brain that controls movement.

Sufferers are known to have diminished supplies of dopamine because nerve cells which make it die.

There is currently no cure and no way of stopping the progression of the disease, but hundreds of scientific trials are underway to try and change that.

Claire was 35 when she first saw a GP about her condition, when her left hand started to shake.

Five years earlier she had begun experiencing digestive problems like constipation, cramping and bloating and fell over a lot – which she now realises are all symptoms of Parkinson’s.

Ms Jones explained: ‘I started to fall over a lot, particularly on my left side. I put that down to being clumsy, but I wasn’t clumsy before.

‘I used to do dance lessons and various different things and I couldn’t understand how I was suddenly struggling with my balance.

‘I think the tremor was the nail in the coffin for me. I knew something was really wrong.

‘My GP was great at pushing for a diagnosis and I was referred for a DaTSCAN, where I was given a radioactive tracer called ioflupane, which helps to show up abnormalities in the brain.’

The scan revealed signs of Parkinson’s, which is far more common in older people.

As well as physical disability Parkinson’s can cause memory problems and depression – because it is so rare at her age, Ms Jones says she can feel isolated.

She said: ‘Parkinson’s is a very large word to have in the room with you all the time. I felt like everyone saw the word before they saw me.

‘My family were worried by it. You imagine this as a condition that older people have, so to be telling my dad I had it felt like it was the wrong way round.’ 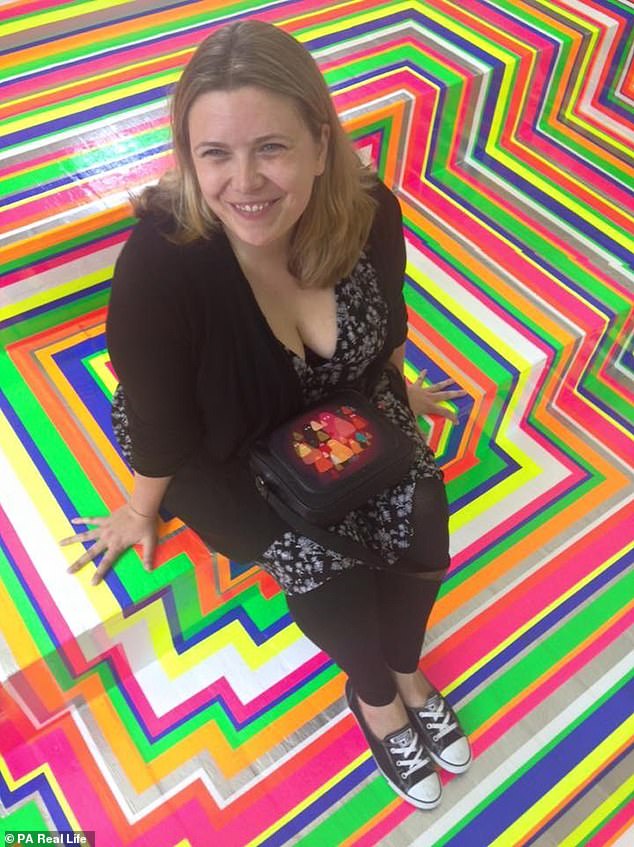 Ms Jones says she can be humiliated by her condition, which makes it hard for her to do her hair or apply makeup, and she has to choose foods which are easy for her to eat with one hand when she goes out to restaurants

Socially, Ms Jones finds her symptoms challenging and has felt humiliated by the limitations the condition imposes on her.

Sometimes she chooses to cover her left arm with a scarf, rather than explaining to people what is wrong.

She said: ‘It’s not that I am ashamed of my Parkinson’s at all. Sometimes I just don’t want it to be all about my condition. I am so much more than that.

‘Trying to explain to someone new why my arm is shaking can be embarrassing and I do giggle when I find that someone is trying their best not to look at my arm and they end up moving their head all over the place.

‘So, sometimes I have a scarf that I put over my arm that shakes, so that people don’t see it immediately.

‘It gives me a chance to say something before they realise. It puts me in control of the conversation.

‘I can’t carry drinks back from the bar. Sometimes people get me a chair when everyone else is standing and it’s so hard to be involved in the conversation.

‘I don’t want to refuse and create even more of a scene. The social norms are really difficult.’

Even an office treat, intended to make a lengthy meeting more fun, can be humiliating for Ms Jones.

She explained: ‘In a previous job, when we had meetings at work, we would get pizza from a place nearby, but it was always uncut and I would have to ask people from my team to cut my dinner up for me, as my left-sided weakness means I can’t do it myself. 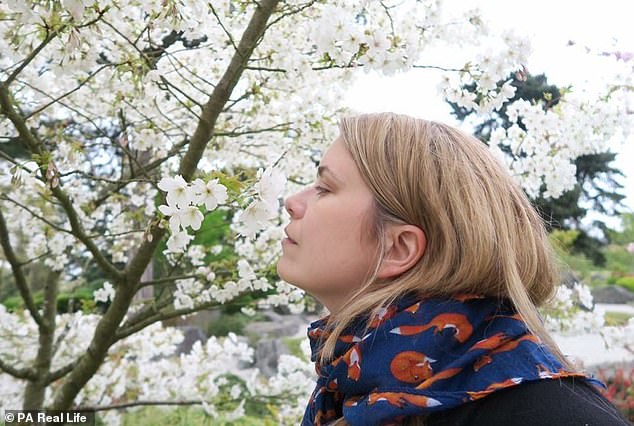 Ms Jones says her condition makes it difficult for her to meet new people because they often see her Parkinson’s first, and sometimes she covers her arm with a scarf to stop people noticing 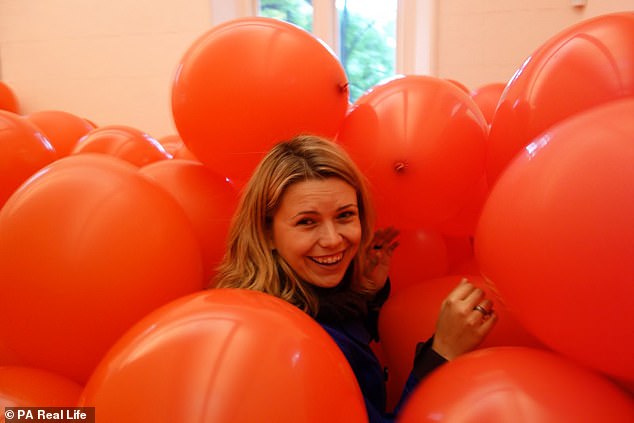 Now 38, Ms Jones has found a partner who she knew beforehand from work and who she says is ‘very supportive’

‘At the moment I am lucky because I get by and I have a great career but there are times when I feel humiliated by my condition.

‘I’m about to have a fundraiser where everyone will get a whole pre-sliced pizza and nobody will be in that situation.

After moving from London to Leicester, where she grew up, at the start of this year, Ms Jones also found her Parkinson’s made it more difficult to make new friends.

Although she did meet her partner, who she does not wish to name, through work.

Ms Jones said: ‘With my new partner, it was easier because we knew each other through work, so he knew about my condition and is very supportive.

‘Parkinson’s can cause problems with going out, though.

‘I have difficulty doing my hair, applying eyeliner is completely out of the question and, when I go to restaurants, I have to look carefully at the menu to consider what is easy for me to eat. It can be really embarrassing, socially.’

Realising how limited help was for younger Parkinson’s sufferers in Leicester, Ms Jones set up her own support group.

‘When I moved back to Leicester I found there wasn’t anything outside of working hours,’ Ms Jones said, ‘And I decided to set something up.

‘The more I get involved and the more I talk to these amazing people who also have Parkinson’s, the harder I want to work. 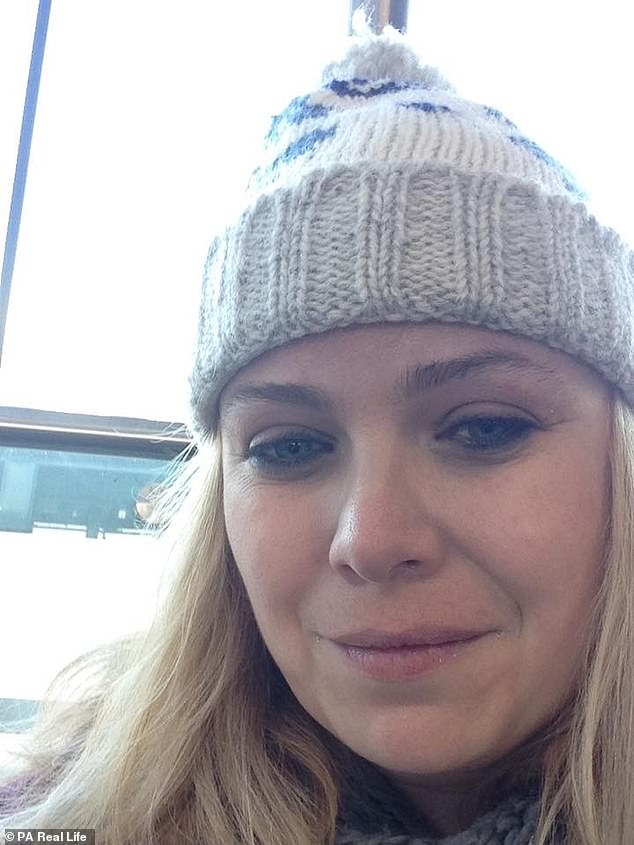 After being diagnosed with young onset Parkinson’s disease, Ms Jones moved back to her home city of Leicester where she started a support group for other people with the condition

‘You see what difference it makes just to have that conversation.

‘There was one person who got up at 6am and travelled to be with us and another who had never spoken about it before he came to the group.’

While Ms Jones is unsure what the future holds, she takes each day at a time and has decided not to find out her prognosis.

‘I decided not to ask what impact this will have on me in the future. I didn’t want to know, because I just want to live my life. It’s an individual journey,’ she said.

‘My biggest worry at the minute concerns my medication, as it only masks my symptoms.

‘Every time it gets increased, in the back of my mind, I am trying to calculate when I’m a step closer to it not working any more.

‘I’m only 38 and I want to continue to live a full life for as long as possible. I want to see my nephew walk down the aisle and buy a house.

‘The future is very scary, but I hope that we can keep looking for a cure, which is why I’m now working with Parkinson’s UK, to continue raising awareness.’

Dr Beckie Port, research communications manager at Parkinson’s UK, said: ‘Being young onset comes with its own unique set of challenges, so we are seeing more and more younger person support networks starting up across the country.

‘This type of support is invaluable when living with a condition that affects everyone differently and therefore can feel incredibly isolating.

‘We still don’t know what causes some people to develop Parkinson’s at a younger age but with more research and a better understanding of the condition, we can get closer to better treatments and a cure for people like Claire.’