A novel light therapy is being investigated as an alternative to prescription drugs to relieve chronic constipation and other intestinal disorders which affect millions of patients around the world.

Flinders University and Washington University researchers have found a “significant technical breakthrough” in a new light and optogenetics technique which has the potential to replace drugs as a less toxic remedy to debilitating gastrointestinal conditions.

“The ability to selectively stimulate transit along the gut in live mammals using light to stimulate specific regions of the gut could avoid the use of non-specific prescription drugs which can induce a long list of unpleasant side effects,” says Flinders University lead investigator Professor Nick Spencer from the College of Medicine and Public Health.

Professor Spencer, who is President of the Australasian Neurogastroenterology and Motility Society, says the research paves the way to use the technique in humans.

“The most exciting aspect is that this optogenetic technology using light has already has been shown to work in targeting cells in other organs without breeding genetically modified animals, so this signals this approach could be applied one day to humans,” he says.

The new study, published in the leading international journal Gastroenterology, shows how the new technique improves transit along the bowel after gut lining nerves are stimulated with the pulses of blue light.

For the first time, the researchers in the US and South Australian laboratories installed wireless-controlled miniature light-emitting diodes (micro-LEDs) into the gut wall of mice which selectively activate excitatory nerves in the gut wall. 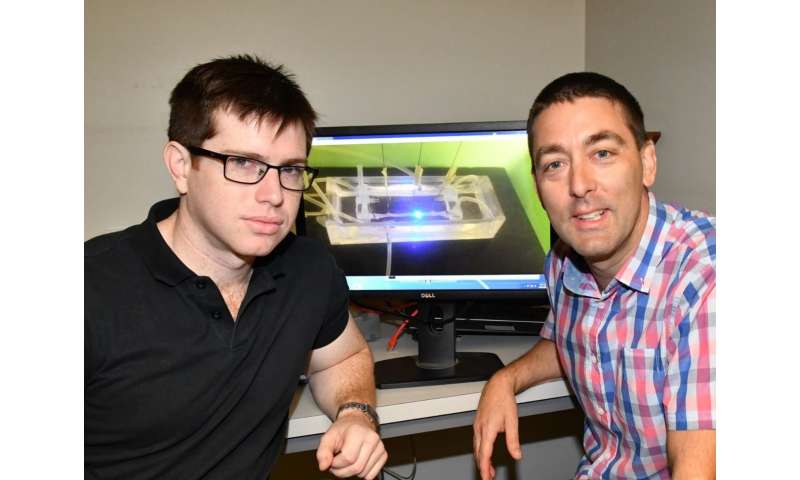 When the team illuminated blue light onto the gut wall, the light-sensitive neurons responded, causing the muscle cells to contract and expel the gut contents.

Co-lead investigator, Dr. Hongzhen Hu from Washington University in the US, says light-stimulated cells can activate an immediate response in the muscles that can efficiently expel the bowel’s contents.

The research uses Channelrhodopsins (or ChR2), a naturally occurring light-gated ion channels originally extracted from algae, and other light-sensitive ion channels, which are useful in neuroscience because they have the unique ability to dissect out the function of specific types of neurons in complex neural circuits.

A range of optogenetics research is already being used by scientists to understand complex aspects of neuroscience, for example sensation, cognition and behaviour including for Alzheimer’s and Parkinson’s, because of the ability to selectively stimulate specific neural pathways that are genetically programmed to express ChR2.

The colonic research using the new technique was funded by the NHMRC of Australia and the National Institutes of Health (NIH) in the USA.