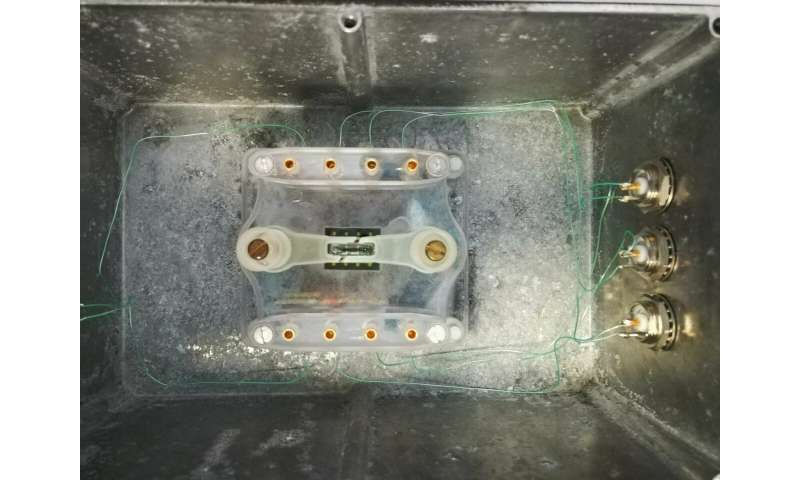 Experts from the Universities of Bath and Seville have carried out a series of experiments by which, for the first time, they have characterized the normal electrical activity in PC-3 prostate cancer cells in real time, with a resulting low-frequency electrical pattern between 0.1 and 10 Hertz.

“We have observed that this electrical activity evolves from asynchronous and sporadic behaviour to synchronous and quasi-periodic behaviour. Once the normal electrical pattern of this type of cells is known, we use a calcium channel barometer, specifically gadolinium (III) chloride, as these channels are directly related to the electrical activity in the PC-3 prostate cancer cells,” explains the University of Seville telecommunications engineer Miguel Cabello.

To cultivate the PC-3 cells, the experts used silicon chips with gold electrodes. This chip, which was connected to equipment that allowed the cultivated cells to receive electrical signals, made it possible to analyse the electrical behaviour of great populations of cultivated cells on these chips with gold electrodes, to obtain their extracellular activity and find a pattern of behaviour for high-precision real-time monitoring.

“One possible application of these studies would consist of carrying out experiments on the release of medicines onto the cultivated cells, measuring the variations in the electrical activity of the cells after the medicine’s use,” states Cabello.

Currently, treatments for this type of disease depend on the stage at which the cancer is at. So treatments can be local, via surgery or radiotherapy, as well as clinical trials for the initial stages; whereas for more advanced stages, it could be necessary, in addition to the previously stated methods, to employ more complex surgery to remove the affected ganglia.

“Our line of research with prostate cancer cells is more oriented to the use, not with patients, but in cancer cell cultures, like those of PC-3, to study and find a relationship between electrical patterns and the proliferation of cancer cells and, also, to find a relationship between the variations in PH levels in the culture during the experiment, and their electrical activity and proliferation. That’s to say, our study is aimed at the first stage of research, before being suitable for use with patients,” the researcher says.