The Ebola outbreak in the Democratic Republic of the Congo (DRC) remains relatively small. The World Health Organization (WHO) reports 56 people with confirmed, probable or suspected infections, including 25 deaths.

But despite the modest numbers, other countries shouldn’t be complacent. It’s in everyone’s interest to help WHO and DRC bring this outbreak under control quickly.

Ebola virus disease is not as contagious as influenza or measles. But it can still spread exponentially fast.

Many things grow along “linear” patterns. They increase by constant amounts each period.

Other quantities grow “exponentially.” They increase by constant proportions.

Imagine a $100 investment earning compound interest of 10 per cent annually. It’ll be worth $110 after one year but $121 after two. That’s because the first year’s interest earns interest in the second year. The compounding lets $100 double to $200 in about 7.3 years, rather than 10.

That was the concept behind a popular 1980’s shampoo commercial.

The West Africa epidemic in 2014

But Ebola infections are far more serious than internet memes or hair-care products. The 2014 Ebola outbreak in West Africa was the largest in history. It began with one sick person in Guinea, then spread into nearby Liberia and Sierra Leone.

Consequently, the disease spread exponentially fast. From March to September 2014, the number of confirmed, probable or suspected Ebola cases grew 2.35 per cent per day on average. The total count roughly doubled each month.

The case growth became more linear in October and November as international aid caught up with the virus. But there were still about 160 new cases daily.

The daily patient additions finally began declining around December 2014. But the outbreak didn’t end until June 2016. It ultimately involved 28,616 patients, of whom 11,310 died. It also cost regional economies US$2.2 billion.

This potential for exponential spread and enormous tragedy explains why reacting quickly to Ebola is key. The health-care demands and human costs are far smaller with 10 cases than 10,000.

Fortunately, health agencies are responding quickly to the current DRC outbreak. Unlike West African countries, DRC has experience handling Ebola. And an experimental vaccine developed in Canada and produced in the United States should help contain the disease.

But the outbreak is not yet under control. If it grows as in 2014, it could exceed 100 cases by late June and 200 before the end of July.

Those figures could be smaller if health workers contain the disease. Or larger if they uncover new infections in remote villages. 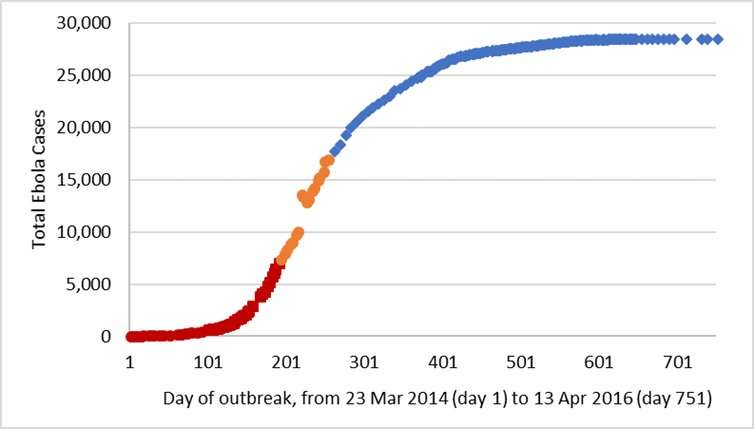 Success depends on how quickly other countries send help. It’s easier and cheaper to handle 56 cases than 200.

Neighbouring African nations are alerting their own health defences. But WHO needs international funding for its US$57 million DRC campaign.

So far, Canada has promised CDN$2.5 million and the United Kingdom has pledged £5 million. The U.S. has sent US$1 million and promised up to US$7 million more.

(Conversely, the Trump administration recently dropped its global health security adviser. It also wants to cancel US$252 million the government previously set aside for future epidemics —like this one.)

Germany, Italy and Norway are also contributing. So far, many other countries with large economies or high per-capita incomes remain conspicuously absent.

If world officials need added motivation, they can simply look to their phones. DRC mines half the world’s cobalt, an ingredient in many rechargeable batteries. An epidemic, or fear of one, that shuts down DRC’s economy could cripple world battery production. That could hinder the manufacture of everything from cellphones to electric cars.

Individuals can help too. They can donate to groups like Doctors Without Borders, the Red Cross or the United Nations Central Emergency Response Fund.

We must ‘go to the gemba’

With the world just a plane ride away, no one can hide from viruses. Airport thermometers and border restrictions help little. Neither measure addresses the problem’s source.

Consider a business analogy. If a company has quality problems, it could hire inspectors to test outgoing products. But they can’t catch every defect or fix the underlying cause.

Or its spokespeople could deny anything is wrong. But such Twitter noise merely lets the problem grow.

Successful businesses instead “go to the gemba” —the scene of the action. They find the problem’s source and help workers there solve it.