Research led by a psychologist at the University of California, Riverside, shows that bilinguals regulate, or suppress, their native language when reading in a second language.

Many in media and in science often assume that reading or speaking in a second language—one that has been learned later in life than the native or first language—is always going to be difficult.

But a study led by psychologist and cognitive neuroscientist Megan Zirnstein shows that bilinguals who are highly proficient in their second language, such as international students who have come to the United States to pursue higher education, can not only overcome the difficulty that being immersed in their non-native language imposes, but also engage in reading strategies in their second language just like their monolingual peers.

“When we account for the challenges that proficient bilinguals must face due to knowing more than one language and being exposed to variable language input, we see evidence in brain activity that some proficient second-language readers can actively predict the meaning of upcoming words, and even quickly adapt when their predictions are wrong, just like their monolingual peers,” said Zirnstein, an assistant research psychologist working in the laboratory of Judith F. Kroll, a distinguished professor of psychology at UCR. “In order to explore how bilingualism might impact cognitive and brain health later in life, we first need to understand what cognitive and environmental pressures bilinguals face when using language every day.”

The study, published in the journal Cognition, highlights the need to acknowledge the variability and diversity inherent in bilingual communities ­— an approach that has the potential to significantly alter conceptions of what it means to use language.

Zirnstein and her colleagues tested 24 English monolinguals and 28 Chinese-English bilinguals in their study. Participants ­— all highly proficient in English—were students at Pennsylvania State University, where the research was performed. Each participant was given sentences to read in English and tested for prediction skills ­— that is, how much the participant expected a particular word to come next in the sentence. For example, if someone read, “She had a great voice, so we knew she would one day become a famous—” it would be logical to expect the word “singer” to appear next. This strategy can help readers, or it can lead to difficulty if the ending is changed to unexpected words such as “actress.”

The students hailed from similar backgrounds and were recruited at similar times during the semester to control for bias. Monolingual and bilinguals read sentences in English one word at a time on a screen while their brain responses were recorded using electroencephalography (EEG). The sentences varied in the predictability of an upcoming word, which could be expected, like “singer” in the above example, or unexpected, as in “actress.” These words should lead to different effects in brain activity, especially for unexpected prediction errors.

“We were interested in examining the language performance and brain activity of bilinguals to see how, with all the pressures of English around them at university, they were able to simultaneously maintain their use of Mandarin (their native language) and engage in highly proficient second language reading,” Zirnstein said. “Questions we were interested in addressing include: How do bilinguals maintain use of their languages? How is this ability impacted by the language(s) they are immersed in? And how does this impact something quite difficult, like predicting words during second-language reading? Bilinguals often find themselves immersed in different cultures and language contexts. We want to understand how this relates to reading comprehension.”

Zirnstein explained it was widely believed bilinguals would be less likely to engage in prediction in the second language. There is also much debate about the extent to which lifelong bilingualism impacts brain and cognitive health, with some research demonstrating a protective effect of bilingualism in older adulthood. 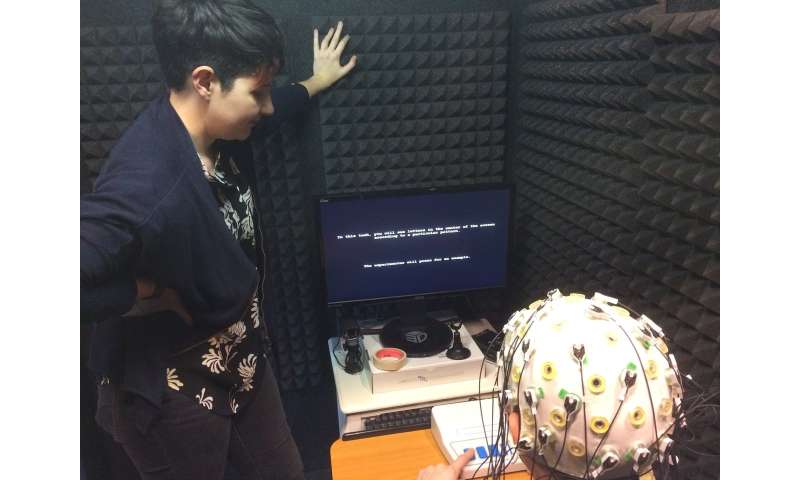 The researchers found that the monolinguals in their study showed sensitivity to prediction error when they encountered unexpected words; for bilinguals this effect was more complex. The researchers also found that the bilinguals’ ability to predict in the second language was determined by how well they were able to regulate or control their native language, which could have caused interference and made reading more difficult. After this was taken into account, brain activity in response to prediction error was associated with both monolinguals’ and bilinguals’ performance on a motor inhibition task.

The study is the first to show that control ability on this type of task can help readers overcome prediction errors, and that it can be demonstrated across people who come from very different kinds of linguistic backgrounds.

She explained that language regulation (suppressing or reducing interference of the native or dominant language and bringing it up again when the non-native language is not being used) plays an important role in how bilinguals comprehend and speak their languages.

“Using production fluency measures, we were able to capture how capable the bilinguals were at bringing the activation of their dominant Mandarin up and down in a way that benefitted them when using English,” Zirnstein said. “Their ability to do this is crucial for freeing up resources to be able to predict when reading in English, their second language.

“We went in thinking second-language readers may not be able to predict the way monolinguals do,” she added. “But when we take into account that some bilinguals are very skilled at negotiating the environmental and linguistic pressures that are exerted on them, we can see that their ability and brain activity in their second language mimics that of monolinguals. In other words, some bilinguals can comprehend in their second language just as well as monolinguals do.”

There is some controversy about whether the use of two or more languages confers advantages to bilinguals’ minds and brains.