Skip to content
HomeDiet & FoodSo, Mushroom Jerky Is a Thing. But is It Healthy?

Making a decision in the supermarket these days is an exercise in patience.

There are an ever-increasing number of packaged products—all marketed to people who don’t have a lot of time to be closely doing the math on nutrition facts panels. (So if there are 280 calories per serving, and the bag says there are about 4 1/2 servings per bag, then…)

So you grab something that looks somewhat good and also good-for-you. But then later you take a closer look and wonder: “Is this even healthy?”

Take jerky. What if you like the whole jerky concept, but aren’t crazy about beef…or turkey or salmon jerky? Enter mushroom jerky, an option that lets vegetarians get in on the chewy (but not candy) packaged snack game. There are a variety of brands out there; I tried Shrooms brand, which had been recommended by a friend who loves them. How they fared: 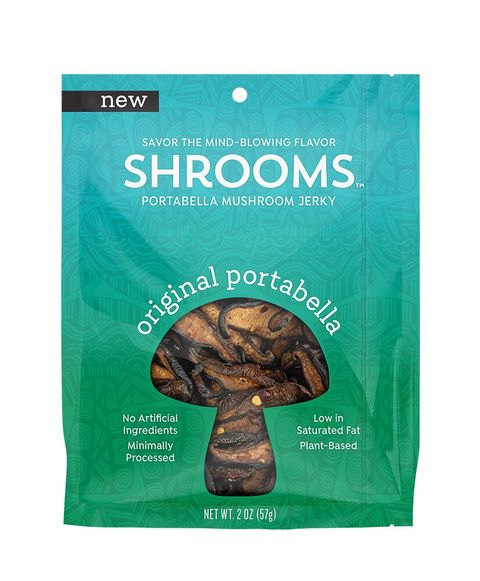 Taste: The flavor is smoky jerky, not mushrooms, to my surprise. Not a bad surprise, just a surprise. (They have other flavors, including honey chipotle and roasted teriyaki.)

Texture: Smooth! Not pull-your-teeth-out, leathery jerky. This has the pleasant, toothsome texture of dried (but not dehydrated) apple slices. It feels substantial as a snack without the chewing effort of meat jerky, which can sometimes make you wonder whether a rawhide dog bone got stuck in the wrong package.

Aftertaste: Onion powder pretty much wrecks my day—tastes cheap, oniony, and sticks around—but these must contain little enough that it doesn’t overpower or linger.

Is This Even Healthy?

I was enjoying the taste. The low calories. The fact that it’s vegetables. And then I talked to Abby Langer, R.D., a dietitian based in Toronto, and let’s just say I closed the bag pretty quickly.

“Nutrition-wise, I was a bit taken aback by the amount of sugar in this jerky. Nine grams per ounce, even in the original flavor, is quite a lot. Even though many beef jerkies have sugar in them, they typically have less,” she says. Some have 6 g; Jack Links has a zero-sugar option (not helpful to vegetarians, we know).

“Also a bit surprising,” she continues, “the mushroom jerky has celery juice powder in all three flavors, which is a ‘natural’ source of nitrites that our bodies still process as chemical nitrates, meaning it’s not any better for us.” Drat.

But before you turn away from Shrooms altogether, let’s take a quick detour: Shrooms also have what they call crisps—they’re crunchy mushroom pieces that are kind of like 3-d potato chips without all the grease. They contain only mushrooms, canola oil, and maltodextrin (and only 2 g sugar per serving). They go down like popcorn, but being so light and crispy, sadly aren’t as satisfying as the jerky.

“Unless you’re vegan, there aren’t a lot of upsides to choosing this jerky. It’s high in sugar, still has nitrites, and it’s low in protein, with 2 grams per ounce versus 11 grams per ounce in the beef version,” Langer says.

But I still think these are useful, occasional problem-solver snacks. The pouches are super travel-friendly, and I could see myself putting these in a carry-on to satisfy any mid-flight munchies. And they’ll keep in a desk drawer for those nights when you work late and need a nosh but not so late you need to eat your whole dinner at your desk (can’t do that with real mushrooms). So I’m gonna go with the 80/20 rule here—eat well 80 percent of the time—and put these in the other 20.

Tags:A, but, Healthy, is, it, Jerky, Mushroom, so, Thing
Related Posts