Pregnant women who drink just two mugs of coffee or three cups of a tea a day are more likely to have overweight children, study finds

Pregnant women who drink more than three cups of tea or two mugs of coffee a day are more likely to have overweight children, new research suggests.

Expectant mothers who consume over 200 mg of caffeine a day are more at risk of having children who grow faster in their early years and carry excess weight by their eighth birthdays, a study found.

Previous animal studies suggest exposure to caffeine in the womb may ‘turn off’ genes linked to weight regulation.

Study author Associate Professor Verena Sengpiel, from Gothenburg University, said: ‘Even if more studies are needed before we can say what this finding really means, caffeine is a substance that you can choose to reduce consumption of or completely refrain from during pregnancy.’

Past research suggests obese children are more likely to suffer from type 2 diabetes and high blood pressure in later life.

The NHS recommends pregnant women limit their daily caffeine consumption to 200mg a day, which is equivalent to two mugs of instant coffee or three cups of tea. 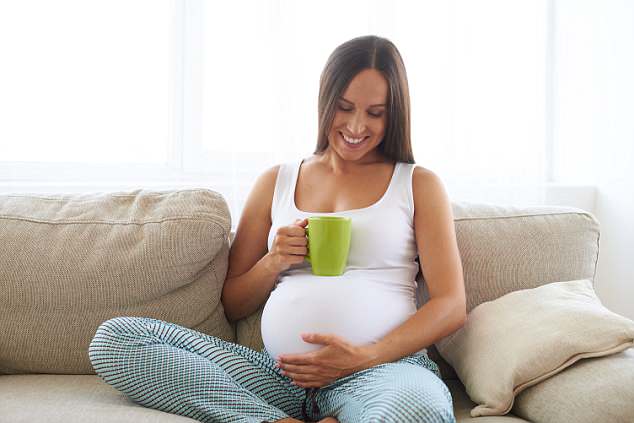 Pregnant women who drink more than three cups of tea a day are more likely to have overweight children. Caffeine exposure may ‘turn off’ genes linked to weight regulation (stock)

ARE MOTHERS WHO WORK LONGER HOURS MORE LIKELY TO HAVE OBESE CHILDREN?

Working women are less likely to have obese children – but only if they are in the office for under 24 hours a week, research suggested in October last year.

Yet, youngsters aged between three and four years old are more at-risk of obesity if their mothers work for more than 35 hours a week, a study by the WZB Berlin Social Science Center found.

Those aged between eight and 14 are less likely to carry excess weight if their mothers work 35-to-40 hours a week, the research adds.

It is unclear why obesity risk varies according to differences in children’s ages and their mother’s working hours, however, the researchers believe seeing less of their parents may be detrimental for some, while others could benefit from the financial and ‘psychological’ advantages.

The World Health Organization estimates 42 million children around the world are overweight or obese, putting them at an increased risk of type 2 diabetes.

Professor Sengpiel said: ‘There may be good cause to increase the restriction of the recommended maximum of three cups of coffee per day.

‘Caffeine is not a medicine that needs to be consumed. It is the world’s most widely consumed central nervous system stimulant.

‘After ingestion, caffeine is readily absorbed into the bloodstream and distributed to the tissues.

‘During pregnancy, elimination of caffeine is prolonged and it rapidly passes all biological membranes, including the blood-brain and placenta barriers, resulting in exposure of the foetus.’

Results further suggest overweight or obese five year olds are five per cent more likely to have mothers who had the highest caffeine consumption during pregnancy compared to those who had the lowest.

Even just one-to-two cups of coffee a day during pregnancy is linked to children being overweight or obese children by the time they go to school.

Only very high caffeine consumption is associated with obesity beyond eight years old.

In terms of caffeine’s source, Professor Sengpiel said: ‘In the Nordic countries, coffee is the primary source, while, women in, for example, England receive the greatest amount of caffeine from black tea.

‘If you look at mothers in the younger age group, it comes from energy drinks. 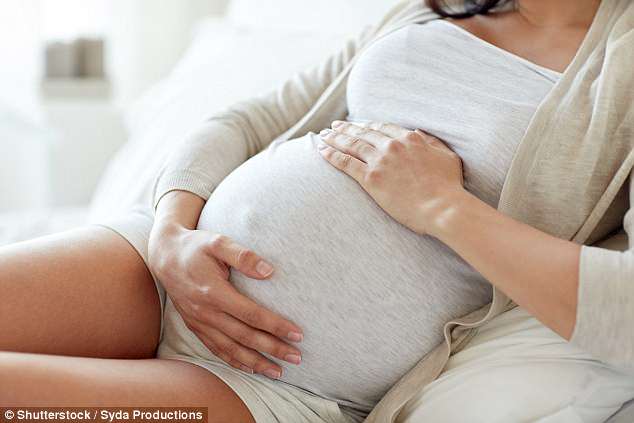 The NHS recommends pregnant women limit their daily caffeine consumption to 200mg a day, which is equivalent to two mugs of instant coffee or three cups of tea (stock)

The researchers analysed 50,943 pregnant women who were taking part in the Norwegian Mother and Child Cohort Study.

Intake was calculated by investigating their consumption of coffee, tea, chocolate and energy drinks.

A 50g bar of dark chocolate contains less than 25mg.

The findings were published in the journal BMJ Open.