This is the stomach-churning moment a podiatrist patches up a gaping hole on the sole of diabetic patient’s foot.

Dr Todd Brennan, 35, was filmed scraping at the wound with a scalpel to clear dead skin before wrapping a bandage around the gash.

The unidentified patient was treated at the Healthy Feet Podiatry clinic in Wesley Chapel, Florida, after developing the gaping sore over a number of weeks.

It started as a blister but quickly became infected and eroded the skin on their foot, without the patient noticing. 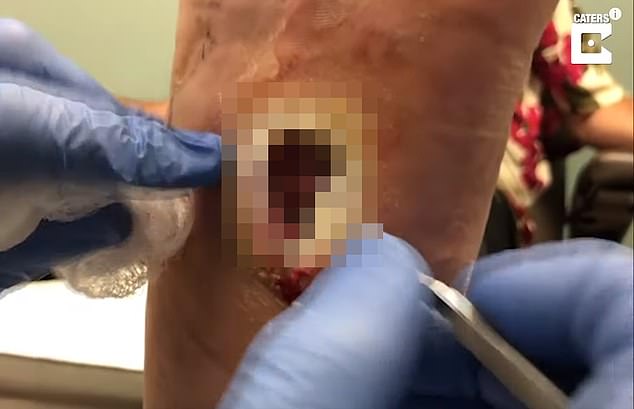 Podiatrist Dr Todd Brennan, 35, shaves dead skin from a gaping hole on the sole of a diabetic patient’s foot 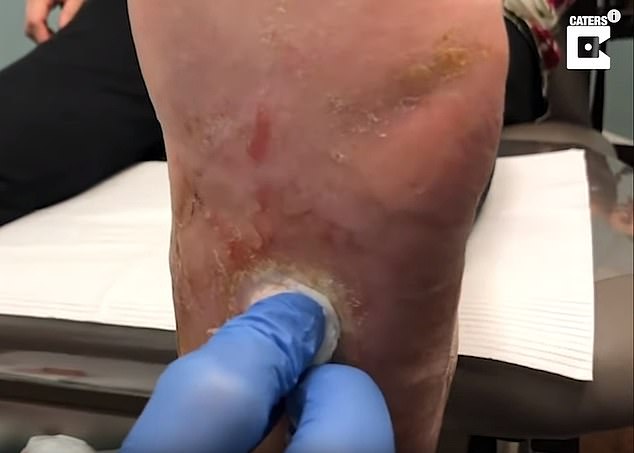 He seals it with cotton wool at the Healthy Feet Podiatry clinic in Wesley Chapel, Florida 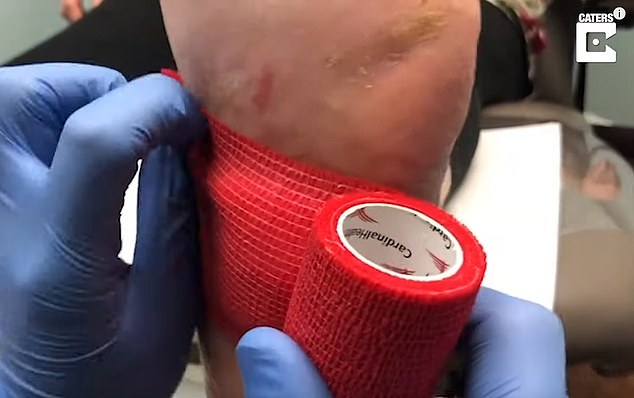 The wound started as a blister but quickly became infected and eroded the skin on the patient’s foot without them patient noticing. Pictured: The podiatrist bandages the gash up

Every 30 seconds, someone in the world with diabetes has a lower limb amputated, according to the charity Diabetes UK.

People with diabetes are more likely to be admitted to hospital with a foot ulcer than with any other complication.

This is because the condition can lead to poor circulation and reduced feeling in the feet.

It means patients may develop a blister or minor burn without realising it, increasing the likelihood of a wound developing and then becoming infected.

WHAT IS DIABETIC FOOT?

It affects up to one in 10 diabetes patients.

Diabetic foot is caused by high glucose levels over a prolonged period of time leading to nerve damage or loss of circulation to the body’s extremities.

This can cause feet to become numb.

People with diabetes should frequently check their feet for signs of damage, including cuts, swelling, hardening skin and discolouration.

Co-owner of Healthy Feet Podiatry, Leo Krawetz said: ‘The procedure was painless because the patient had neuropathy [she could’t feel her feet].

‘Dr Brennan was content knowing he was helping a patient get better and that they were better than before he started.’

Last month a diabetic woman had to have her leg amputated after an ingrown toenail caused by running became gangrenous.

Heather Satchwell, 27, of Newhall, Derbyshire, was training for a charity 5km run in February 2015 when she noticed her nail.

She went straight to hospital because she has type 1 diabetes and knew she was at higher risk of infection due to nerve damage in her feet.

Doctors were forced to amputate the big toe on her right foot in June 2016, months after she had the infected nail removed. 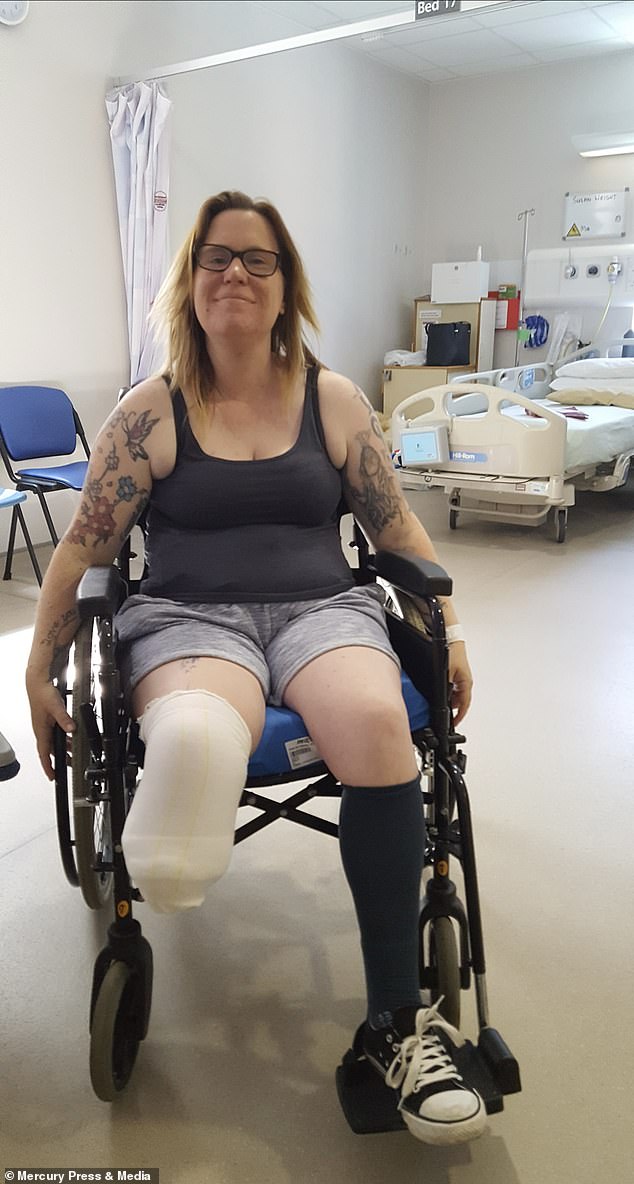 Heather Satchwell, who has diabetes, had to have her leg amputated after an ingrown toenail caused by running became gangrenous 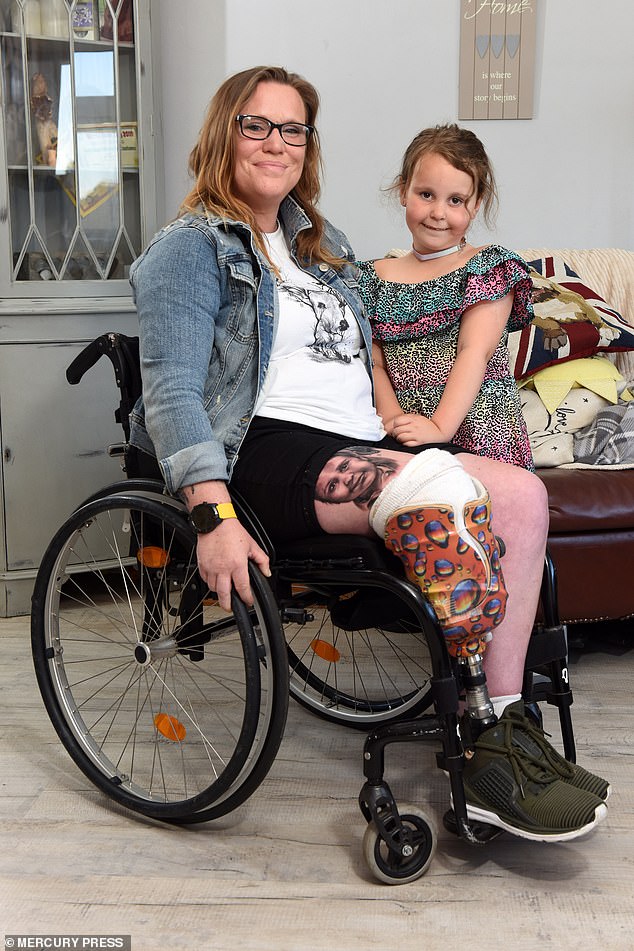 The former police and council CCTV worker must now rely on a prosthetic leg and wheelchair to get around, which has been life-changing for her and her daughter, Gia, six

She ended up needing her leg amputated below the knee in 2018, after the infection wouldn’t budge and threatened her life, doctors said.

Ms Satchwell must now rely on a prosthetic leg and wheelchair to get around, which has been life-changing for her and her six-year-old daughter, Gia.

They had to find a disability-friendly home, and have since appealed to the public to help build a garden they can both enjoy.

HOW CAN DIABETES LEAD TO FOOT AMPUTATIONS?

People with diabetes are far more likely to need their toes or feet amputated because their injuries do not heal normally.

High blood sugar can cause nerve damage which means patients cannot feel their skin as well and may not know when they have a wound, or feel how serious it is.

And diabetes restricts circulation in the legs, which slows down healing because oxygen and nutrients are in short supply.

The combination of these two factors means it can take longer for people to get over injuries and the healing time means there is more opportunity for it to become infected or for flesh to die because of gangrene.

If an injury becomes too infected or untreatable the affected part of the body may have to be cut off.