Skip to content
HomeHealth NewsDocs slam T.I. for saying he takes his daughter to 'check her hymen'

Doctors and nurses slam rapper T.I. for taking his daughter, 18, to ‘check her hymen’ every year and say that so-called ‘virginity tests’ are unreliable, ‘humiliating and painful’

Rapper T.I. came under fire last week after admitting in an interview that he takes his 18-year-old daughter to an annual gynecological exam to determine if she’s a virgin.

Appearing on the Ladies Like Us podcast, which is hosted by two women, T.I. – whose legal name is Clifford Joseph Harris Jr. – said he makes his daughter, Deyjah Harris, undergo a pelvic exam to see if ‘her hymen is still intact.’

The medical community has slammed so-called ‘virginity tests’ as sham exams that violate women’s rights and do not have any scientific evidence to back them up.

Doctors and nurses spoke with DailyMail.com about why these exams are unreliable and the unnecessary pain and ‘humiliation’ for the women forced to undergo these tests, which are often required by certain religions before marriage. 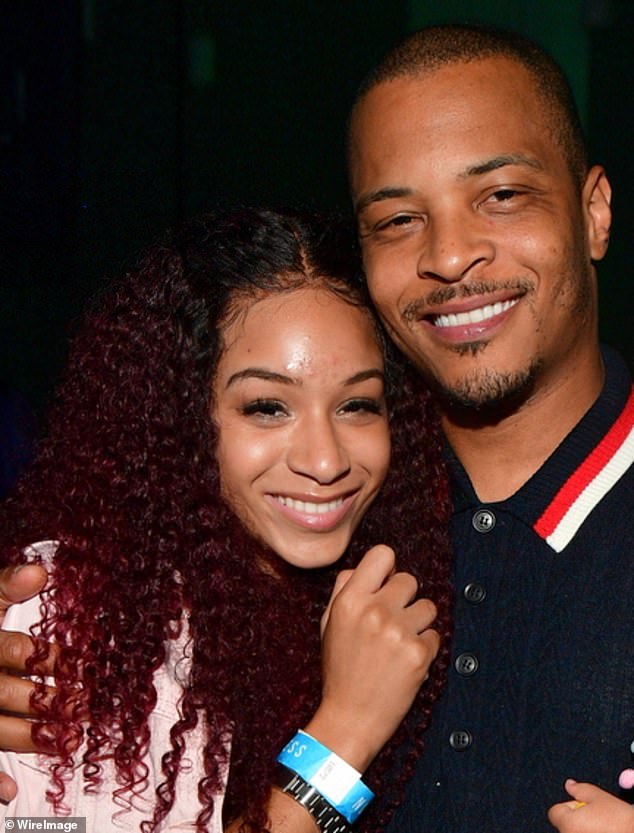 Medical professionals tell DailyMail.com that so-called ‘virginity tests’ – which rapper T.I. has done on his 18-year-old daughter, Deyjah Harris – violate women’s rights and are not based on any scientific evidence. Pictured: T.I., right, with Deyjah in July 2018

‘An exam will not tell me if you or your teenager is sexually active,’ Jennifer Pierce-Weeks, a registered nurse and the CEO of the International Association of Forensic Nurses, told DailyMail.com.

‘Parents will sometimes say: “I want you to check and tell me whether or not my daughter has been having sex.”

‘And we have to explain to them: “You cannot examine someone and unequivocally determine whether or not sex has been taking place”.’

So-called ‘virginity testing’ is conducted in one of two ways, one of which is a doctor’s examination of the hymen.

The hymen is a very small and thin piece of tissue that partially covers the opening of the vagina, forming part of the external genitalia.

Historically, it was believed that during a woman’s first time having sex, the hymen would ‘break’ or tear and cause bleeding.

But sometimes the hymen does not tear during intercourse. It can also be torn in other ways.

T.I. said, during the interview, that his daughter’s gynecologist has told him this as well, but he dismissed it.

Health experts say, however, that the hymen doesn’t ‘disappear’ after a women has sex for the first time.

The other ‘virginity test’ is the two-finger test, in which a clinician will stick his or her fingers into a woman’s vaginal canal to see how stretchy it is.

WHAT IS THE HYMEN?

The hymen is a small, thin tissue that partially covers the vaginal opening.

The upper two-thirds of the vagina form during one part of a fetus’s development and the lower one-third during another.

When they join together, that’s when the hymen is formed.

A common misconception is that hymens completely cover the opening of the vagina.

However, most women have hymens with holes large enough for period blood to come out or for a tampon to be inserted.

Some women might have a hymen tear or stretch the first time they have vaginal sex, which can cause pain and bleeding.

This doesn’t happen to everyone those and the hymen can tear or stretch in other ways such as through sports or putting something in the vagina.

In rare cases, some baby girls are born without hymens.

Because of these factors, doctors say there is no correlation between the size and the shape of the hymen and determine whether or not a woman has had sexual intercourse.

‘As you can imagine, it can be an incredibly humiliating process for a woman or a girl,’ Dr Ranit Mishori, a professor of family medicine at Georgetown University and a senior medical adviser at Physicians for Human Rights, told DailyMail.com.

‘It’s not just the humiliating aspect, but it can be physically painful and harmful.’

According to the United Nations, ‘virginity testing’ has been documented in at least 20 countries across the globe, including the US.

The numbers are not tracked by public health records and reports come from anecdotal accounts of patients and doctors of women and girls forced to undergo these exams to prove they haven’t had sex before marriage.

Health experts are in resounding agreement that the medical community needs to dispel the myths that surround the hymen and virginity.

‘As clinicians, we need to talk about why this is a meaningless practice,’ Dr Mishori said.

In addition, clinicians say young women should have an expectation that conversations surrounding sex will stay between the doctor and patient.

In the interview, T.I. said he coerced his daughter into signing a waiver so he could see the results of her ‘virginity test’.

‘I think what we can tell young women is they have rights to privacy in medical settings – not just in their doctor’s office but also their medical records,’ said Pierce-Weeks.

‘We don’t want teenagers so fearful they won’t tell us when they’re engaging in sexual activity.’

The day after T.I.’s interview, Dr Ted Anderson, president of the American College of Obstetricians and Gynecologists (ACOG), released the following statement:

‘The American College of Obstetricians and Gynecologists (ACOG) does not have guidance on “virginity testing.” As a medical organization, ACOG releases guidance on medically indicated and valid procedures.’