Scientist have created a tiny device that can repair nerves and then deteriorate inside the body, making it the first ‘bioelectronic’ medicine.

There is a lot of hype around using technology to better our health through apps, wearables and even pills that keep track of when you took them.

Now, the researchers at Northwestern University have come up with a recipe to build electronic treatment devices out of materials that dissolve in the body – and most of them are part of our daily diet.

So far, they have successfully used their first device to treat damaged nerves in rats, but someday this tiny electronics could help keep hearts beating in time. 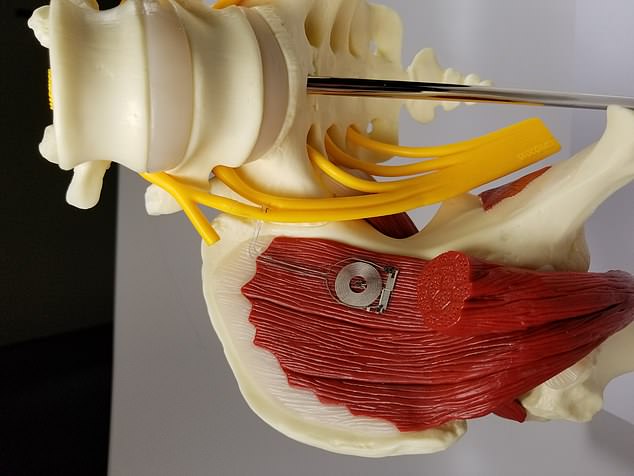 Scientists have created a tiny biodegradable implant (silver) that can send electrical impulses to help repair damaged nerves, then disappears in the body

We use all kinds of electronics to treat health conditions and injuries, but often they have to be surgically implanted, so when they malfunction or their batteries die, patients have to go back under the knife.

Many materials are safe for use in the body, but they change and break down the way our own tissues do.

But that may be changing.

The the new disc-shaped wireless device is about the size of nickel, stimulates peripheral nerves with weak electric shocks.

More importantly it is made of entirely of biodegradable materials.

That means that when a nerve is healed, the body’s fluids naturally break it down and it exits like any other waste would.

That’s because, even though it is a remote controlled semiconductor, the device is essentially made of substances that are part of our daily diet.

In order to pulse the nerves, scientists needed to create a structure with conductors through which electric impulses can travel, insulation around them, and a semiconductor to be the brains of the operation.

‘A semiconductor is critical because it is the foundation of all electronic gadgetry,’ study co-author, Dr John Roberts of Northwestern University told Daily Mail Online.

‘Silicon itself is the workhorse material of the electronics industry … and it is actually a recommended part of a daily diet.

‘So we used exceptionally thin, small pieces of it. They themselves naturally dissolve when they come into contact with biofluds.’

To conduct the electrical signals, the research team used super thin magnesium, a substance that is also one of our dietary nutrients.

For insulation, Dr Roberts and his collaborators at Northwestern and the University of Washington used similar biodegradable ‘plastics’ to those used in dissolvable stitches, but he says that cellulose or silk could easily work too.

In tests on injured rats, it quickened the regrowth of nerves in the legs leading to the recovery of muscle strength. 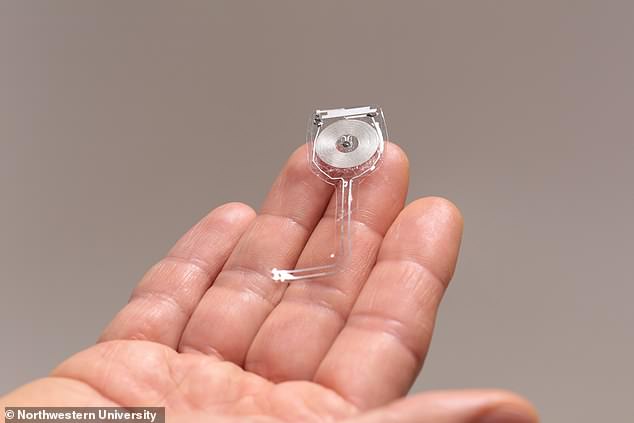 About the size of a nickel, the new device is made of such delicate materials that it dissolves when rubbed between the fingers

After about two weeks the device dissolves on its own. It can even be broken up in second between fingers, turning to shimmery flakes, then disappearing entirely.

Scientists believe it could help thousands of people affected by numbness, tingling and weakness caused by sports injuries, accidents, or even too much typing or texting.

Dr Wilson Ray, who co-led the research at the University of Washington, US, said: ‘We know that electrical stimulation during surgery helps, but once the surgery is over, the window for intervening is closed.

“With this device, we’ve shown that electrical stimulation given on a scheduled basis can further enhance nerve recovery.”

Unlike their counterparts in the brain and spinal cord, peripheral nerves running through the arms, legs and torso can regenerate after injury.

Most people with peripheral nerve damage are offered painkillers, physical therapy, and in extreme cases, surgery.

The new device, described in the journal Nature Medicine, is powered wirelessly by a transmitter outside the body.

‘These platforms represent the first examples of a “bioelectronic medicine” – engineered systems that provide active, therapeutic function in a programmable, dosed format and then naturally disappear into the body, without a trace,’ said Dr Roberts.

He says that he and his team are already in talks with cardiologists about how the device could be applied to temporarily pace the heart during open heart surgeries.

And there’s no reason to believe that the same materials his team engineered couldn’t be refashioned into all manner of devices.

‘We’re excited not only about the ability of this specific device but more broadly as concept going forward that could be used for an improvement in the way that we treat disease and injury,’ he said.