Children paralysed by a rare polio-like illness which has spiked in the UK and US this year could have their lives transformed by pioneering surgery.

A nerve transfer could restore movement and feeling to parts of the body damaged by the poorly-understood condition.

Acute flaccid myelitis, believed to be triggered by a virus, affected nine years’ worth of patients in the UK in 2018 and more than 160 in the US.

The mysterious illness cannot be cured or prevented and strikes suddenly, causing serious nerve damage before doctors can properly diagnose it.

But those left with disability could have a ray of hope in a new procedure which swaps nerves from unaffected muscles to restore movement. 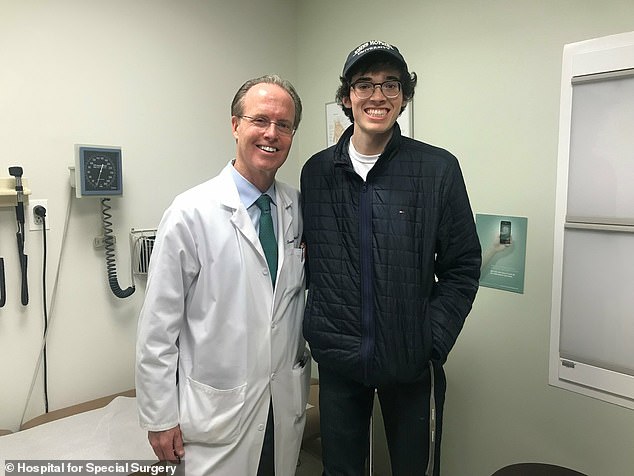 Dr Scott Wolfe, at the Hospital for Special Surgery, has successfully used nerve grafting surgery to repair the muscles of children and young people (pictured, Kale Hyden) who have become paralysed by acute flaccid myelitis/paralysis

A surgeon at the Hospital for Special Surgery in New York City, Dr Scott Wolfe, has already had success with the nerve transfer in AFM patients.

One 15-year-old patient left paralysed from the neck down by AFM had the movement in his hands and arms restored by the operation.

Kale Hyder, a 6ft 2ins (187cm) basketball player from Davenport, Iowa, was left confined to a wheelchair after being suddenly struck by AFM in 2015.

He woke up one day with a stiff neck so asked his mother for a new pillow but, by the next day, he was unable to move his arms and could barely stand up.

After being rushed to hospital, Kale soon became completely paralysed and was told he would never regain the use of his hands.

‘Here’s my basketball player, sitting next to me in a wheelchair. Everything changed in the blink of an eye. When we got out of there, we all just sobbed.’

WHAT IS ACUTE FLACCID MYELITIS?

Acute flaccid myelitis (AFM), of which acute flaccid paralysis is believed to be an effect, is a rare and poorly-understood but serious condition.

The condition is thought to be caused by viruses such as enteroviruses which infect the brain or spinal cord and cause nerve damage.

Viruses believed to trigger the condition usually only cause mild flu-like symptoms but can trigger the more serious AFM.

Patients may also have cold-like symptoms or a fever.

Because its causes are unclear there is no standard treatment for AFM and therapy is usually given on a case-by-case basis.

There are usually only a ‘handful’ of cases in England each year, while the US tends to go through a two-yearly cycle in which there will be a year with only two dozen or so cases then the next year will be over 100.

The virus Enterovirus D68 is believed to be linked to the infection and has been found in patients in both the US and UK.

But thanks to the ambitious surgery by Dr Wolfe, Kale can now use his hands and arms again and is studying to be a neurologist at Johns Hopkins University.

He has gained enough independence to go to classes, do volunteer work, use a computer keyboard, go food shopping and do his own laundry.

To repair Kale’s arms, Dr Wolfe took functioning nerves from other parts of his body and grafted them onto the muscles in his damaged limbs.

Although he is pictured standing beside Dr Wolfe, it is not clear whether Kale’s legs have recovered.

The surgery takes hours to research and test different nerves in a patient’s body to find ones which are suitable for the procedure.

The operations themselves are performed under a microscope and take five to seven hours at a time.

‘We have been performing nerve transfers for patients with [spinal] injuries, so it made sense to try it for AFM patients,’ Dr. Wolfe said. ‘But it’s more challenging.

‘Since the disease causes almost random patterns of muscle paralysis, there’s no roadmap to follow and we have to come up with a creative solution for each patient.

‘We take a full inventory of what’s working and what’s not working in each limb by checking each muscle.

‘We look for donor nerves, so if two muscles move an elbow, for example, we can take one of the nerves controlling that function and use it to restore function to a hand or shoulder.’

Dr Wolfe said the complex operation is not performed by many surgeons and there is a small window in which it could work – ideally within nine months of first paralysis.

Acute flaccid myelitis was diagnosed in at least 28 people in the UK last year, more than the previous nine years combined – there were only 25 cases between 2009 and 2017.

Most patients have been hospitalised and 60 per cent of them were under the age of five, Public Health England said.

The illness is said to resemble polio because it causes fever and floppy limbs.

It is believed to be caused by enteroviruses, which are increasingly common and usually don’t trigger serious illness.

SPIKE IN ACUTE FLACCID PARALYSIS CASES IN THE UK

A total of 28 cases of the polio-like acute flaccid paralysis (AFP) were reported in the country last year, Public Health England warned.

This was more than the previous nine years combined – there were only 25 cases between 2009 and 2017.

Normally only a handful of people develop the illness each year, which resembles polio by causing symptoms such as a fever and floppy limbs.

The spike comes amid a record high number of cases of an almost identical condition – acute flaccid myelitis – in the US this year, with at least 158 children affected.

Most of the English patients have been hospitalised with limb weakness and 60 per cent of them have been under the age of five, Public Health England confirmed.

Three-year-old Chloe Stevenson, from Plymouth, was among one of the patients to be affected by the devastating illness. 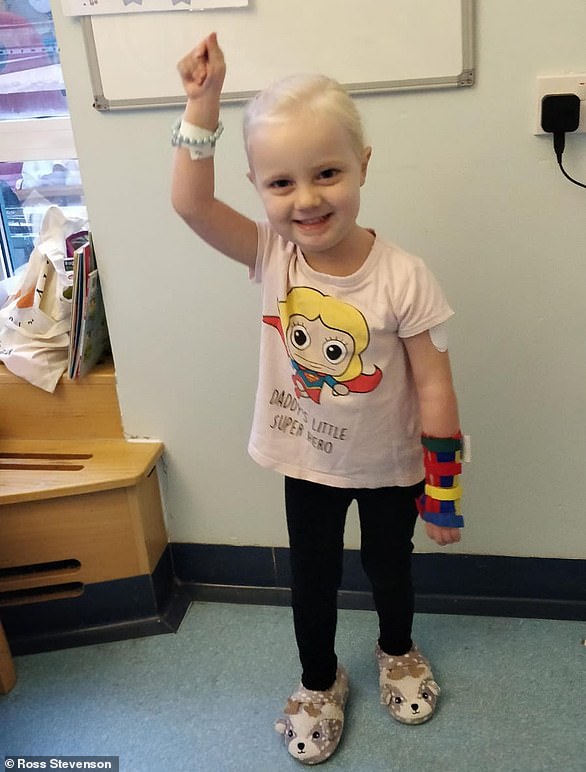 Chloe, three, fell ill just days after her first ballet lesson and in her first week at pre-school, and her parents now have no idea what her long-term prognosis is

After falling ill in September she spent months in hospital in Bristol, 100 miles from her home, and has lost the use of her left arm.

Her symptoms took just a single day to progress from a high temperature to being paralysed in one arm, one leg and her core muscles.

She is recovering but her mother, Vanessa Carter said: ‘We don’t know her long-term prognosis and I don’t know if she could get it again.

‘She has good and bad days and can still walk normally but I’m fearful for her future.’