Skip to content
HomeHealth NewsI won’t have what he’s having: The brain and socially motivated behavior 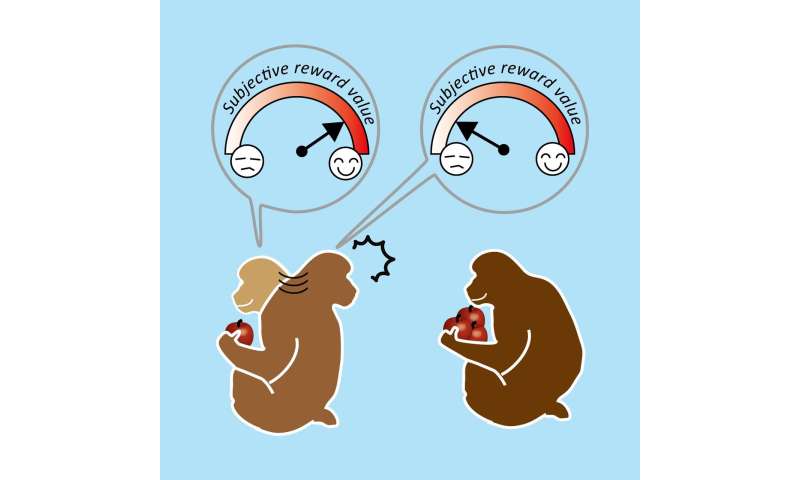 How much we value an item is often related to what other people have. You might want the newest fashion, but not once everybody has it. Or, winning a free lunch at your favorite restaurant might not seem as great if the other person won a million dollars. Now, researchers in Japan have discovered a region of the brain that controls these kinds of behaviors in monkeys.

In their study published in Proceedings of the National Academy of Sciences, a team of researchers from the National Institutes of Natural Sciences in Okazaki, Japan show that when monkeys think other monkeys will be rewarded, their own rewards become less appealing. This was evident in the amount that monkeys licked their lips while waiting for their reward. The team found that licking increased the more monkeys anticipated receiving a reward and decreased as they anticipated the other monkey would receive it instead.

This behavior was reflected in the brain. As first author Atsushi Noritake explains, “We found a clear link between brain activity in the lateral hypothalamus and the licking behavior that represented subjective value of the reward.” The team recorded activity from neurons as monkeys saw pictures that indicated the chance that they or another monkey would receive a reward. The scientists found that for some cells, firing rates increased with the probability of receiving the reward and decreased with the probability that the other monkey would get the reward.

A second experiment showed that the same brain region was necessary for the social observations to affect how much the monkeys valued the reward. When the scientists temporarily shut down the lateral hypothalamus using an inhibitory drug, the monkeys’ licking behavior was unchanged when they anticipated receiving the reward themselves—it still increased with the chance of reward. However, the amount of licking was now unrelated to the chance of reward when they were cued that the other monkey was likely to get it.

This behavior was similar to what happened when the other monkey was prevented from getting the reward or when it was absent altogether.

Tags:and, Behavior, brain, have, Having, hes, I, motivated, socially, the, what, Won’t
Related Posts