Skip to content
HomeHealth NewsMan, 30 who stunned doctors by surviving SIX aneurysms in one day rk

Man, 30 who stunned doctors by surviving SIX aneurysms in one day returns to work six months later – at the hospital that saved him

A 30-year-old man had six brain aneurysms, survived to tell the tale, and to return to work today at the same hospital where he collapsed and was diagnosed.

One of the aneurysms ruptured, meaning there was a 15 percent risk that Billy Brogdon-Simmons would not survive – even if his brain hadn’t been riddled by another five aneurysms.

Billy collapsed at a Christmas party hosted by the hospital where he worked in Queens, New York.

It was so rare to have six aneurysms and Billy’s were in such dangerous locations that his doctors nearly refused to operate for fear that he would never recover with any meaningful quality of life.

Incredibly, surgery and rehabilitation have brought Billy back from the brink of probable death from a highly improbable condition. 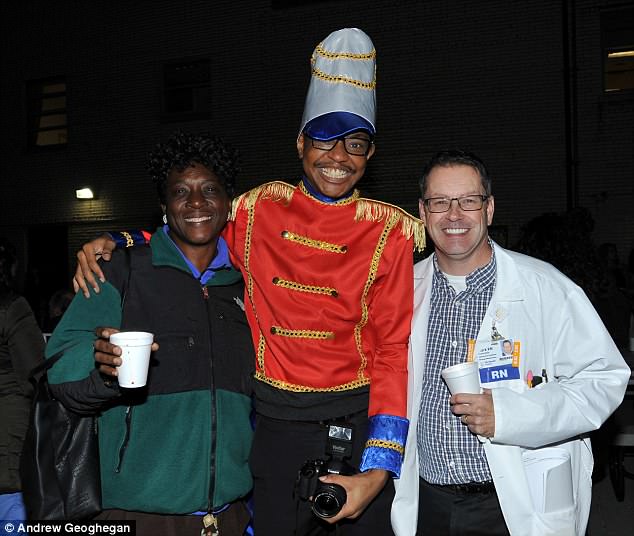 On the night an aneurysm ruptured in his brain, Billy Brogdon-Simmons  (center) was enjoying his co-workers, dressed as a toy soldier at a tree-lighting for the hospital where he worked

On November 29, 2017, the ever-enthusiastic Billy showed up at the Long Island Jewish Valley Stream Hospital to work the facility’s first-ever Christmas tree-lighting.

He was dressed in a spiffy toy soldier costume and excited to use the brand new camera he’d just picked up to photograph the choirs singing there.

One second Billy was smiling, alternately taking and posing in photos, and the next he collapsed and begun seizing outside during the tree-lighting as one of the six aneurysms in his brain burst.

When he work up, Billy says he was ‘in shock, but I couldn’t show it,’ Billy says.

‘I couldn’t speak, I couldn’t move, so I was just housing it internally.

‘It’s probably a good thing, because I would have been outraged.’ 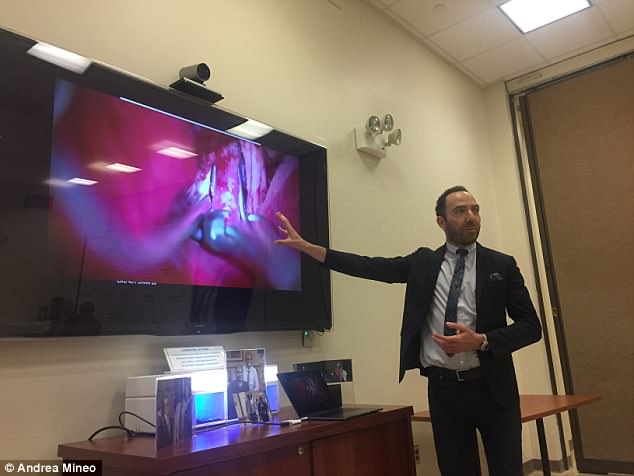 Billy ‘checked in with this big [surgical scheduling board] with dates and times,’ he remembers.

It was December 9. Billy had been in a coma for 14 days after he had arrived at the tree-lighting ceremony.

About one in 50 people has at least one spot in their brain where a weakened blood vessel is bulging, threatening to leak or rupture.

Each year, the dam breaks and 30,000 people suffer a rupture, aneurysm, which proves fatal for about 40 percent of them.

Brain aneurysms are notorious for being quick killers; about fifteen percent of people who have them die before they reach a hospital for treatment.

But Billy was – at least in that one way – extraordinarily lucky.

Dr Joseph Marino, medical director of the hospital was among the crowd gathered for the tree-lighting.

He remembers contemplating CPR for Billy and turning around to see that a stretcher had appeared behind him. Billy was whisked into the ER, quickly intubated and sent for a CT scan. 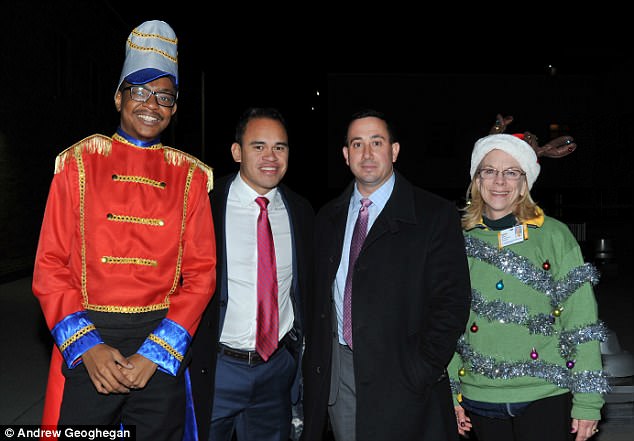 Having many doctors, nurses and hospital staff on hand at the tree-lighting when he collapsed may well have saved Billy’s life 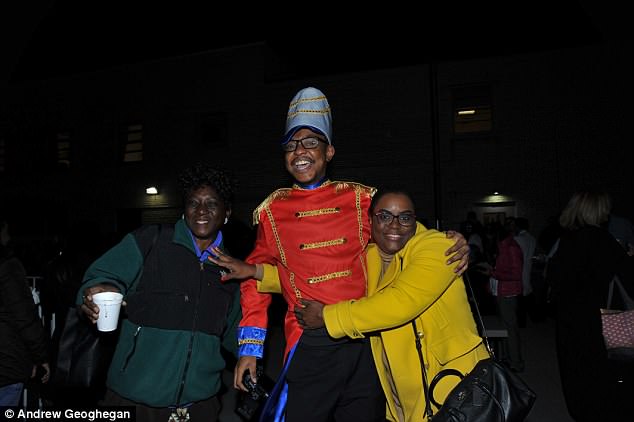 Billy laughed and joked around with co-workers, grinning through a headache moments before his aneurysm ruptured

‘What might have taken 25 minutes happened in three,’ he recalls.

A neuroradiologist happened to be on-call that night, and quickly identified the aneurysms.

Billy had fallen into a coma and was transferred immediately to Northwell Neuroscience Institute where Dr Amir Dehdashti, a cerebrovascular neurosurgeon, had to take pause when he got Billy’s case.

‘It’s pretty unlikely, especially in a very young person, to have so many aneurysms, but he probably has a genetic predisposition. It’s rare but not impossible. It’s more likely in older people or females,’ Dr Dehdashti told Daily Mail Online.

There was no time to take Billy’s medical history, but in fact his father had died suddenly in 2006, at only 58 years old. There was no autopsy, but Billy now suspects that the same thing that nearly killed him might have led to his father’s death.

When Dr Dehdashti got Billy’s case, he was hesitant to do anything at all, at first.

‘Most of the time those patients [who are comatose from so many aneurysms or a ruptured aneurysm] don’t do well so we don’t put them through the hassle of treatment,’ he said.

But Billy was young, strong and showed signs of life that convinced Dr Dehdashti to take a risk. 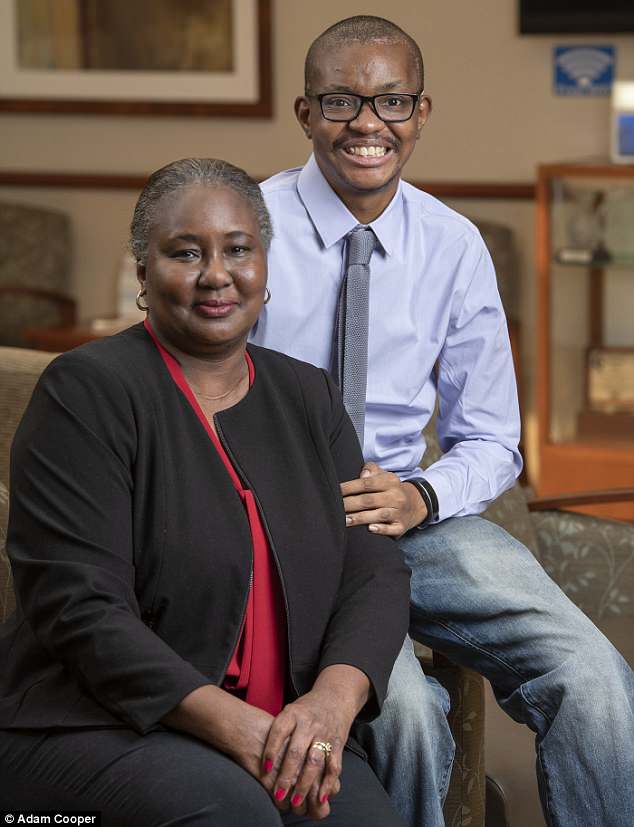 For six months, Billy lived with his mother, Donna (left) while undergoing rehab to regain his speech and motor skills

‘Billy showed some degree of spontaneous movement of his arms and his legs. It showed he had a good chance of making it. Because he was of a young age I decided to be very aggressive and treat him,’ he said.

Dr Dehdashti operated, clipping four aneurysms – including the one that burst – from the central pericallosal region of Billy’s brain.

He left two aneurysms – in the opthalmic region and along the middle cerebral artery – in place, for the time being.

‘All of them are risky but the pericallosal is in particular because it’s pretty deep in the brain. The ophthalmic too, because you have to drill to get to the base of the skull,’ Dr Dehdashti said.

But Billy pulled through the delicate operation, and awoke 14 days later ready to get to work at the five months of physical, speech and occupational therapy ahead of him.

At first, Billy could only communicate by giving a thumbs up or ‘sort of making a little heart-shaped thing’ with his hands, ‘to show my nieces and nephews to show them I loved them,’ he says.

The worst part of those first days following surgery for Billy was not being able to eat or drink.

‘I love food, but I couldn’t eat anything until December 23,’ he said.

Just in time for Christmas, his first meal was a hearty dinner of lamb chops, asparagus and a coca-cola. 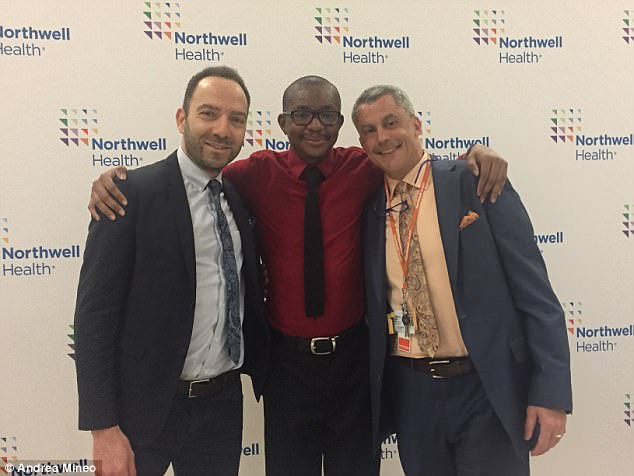 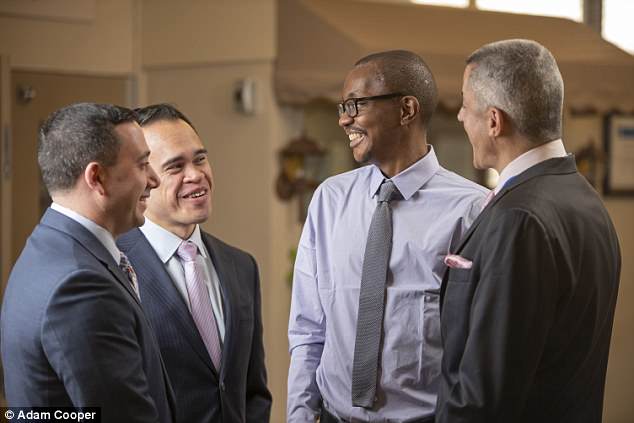 Billy says he ‘looks at life differently now’ – and he has a new look, too, as his dreads had to be traded in for a shaved head for doctors to perform his  life-saving brain surgeries

That hospital meal ‘was delicious – I even ate all my vegetables, too. I’ve never tasted anything so good as that meal,’ he said.

Billy already had to be a bit careful about his diet because he has sickle cell anemia (as did his father) and a better diet will be even more important to lower his risks of having any more aneurysms.

But now he appreciates all of his nutritious meals and that ‘it’s the little things, like food and drink and talking,’ he added.

He had to come back to Northwell Hospital to take care of fifth aneurysm in March, and his doctors will continue to monitor the sixth one.

He is thrilled to start back to work today. These first few days will be ‘like a reunion tour, he says, and though his mother, Donna, is sad to see Billy leave her home and care, he is looking forward to returning to his own apartment.

But with his new lease on life, Billy is ready for some changes, too.

It started with his new hairdo – a shaved head, with some faint scars, instead of the dreads he had before Christmas – and next up, Billy is determined to travel, starting with Hawaii.

‘And I’m searching for a wife, so if there’s one out  there…hopefully someone clinical, maybe a nurse…’ he pondered.

Most importantly, ‘I’m better than ever, it’s almost like nothing even happened,’ he says.