New research claims to link the use of acetaminophen during pregnancy to an increased risk of your child having ADHD or autism.

Researchers from Johns Hopkins University Bloomberg School of Public Health examined umbilical cord blood samples and found a higher risk of both disorders where the drug was present.

In fact, they say children exposed to the drug, also known by the brand name Tylenol, or paracetamol in Europe, in utero were twice as likely to have some type of developmental disorder – or a combination of the two – than to not have one

Our attempt to understand the cause of autism led the 1994 – now debunked – study that linked autism to the MMR vaccine and gave rise to the anti-vaxxer movement.

Experts now say that this study – linking autism to a common medication – has several limitations and that there is no clear evidence the disorders are not a result of a family history, genetics or other environmental factors. 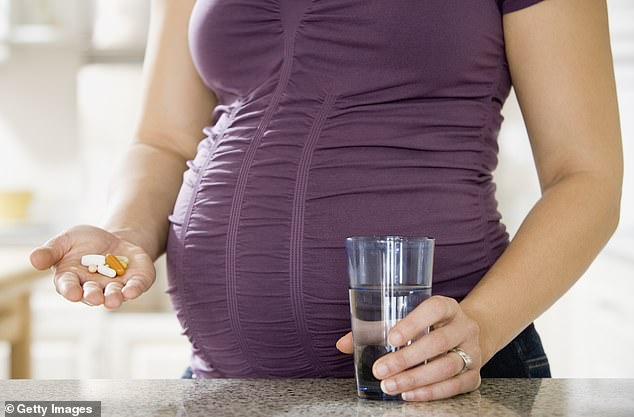 Symptoms usually begin in childhood and can continue through adolescence and into adulthood.

It affects about 10 percent of children under age 18 in the US, and is more common in boys than girls.

There is no cure, so treatment currently consists of moderating symptoms via medications, therapy, training or a combination.

Meanwhile, autism spectrum disorder (ASD) is a developmental disorder in which sufferers have a hard time communicating and with behavior.

It encompasses several conditions – including autism, Asperger’s syndrome and other disorders with language and motor skill delays – and symptoms can range from mild to severe.

Children are usually diagnosed by age two after they exhibit signs such as reduced eye contact, not responding to their name and performing repetitive movements.

According to the Centers for Disease Control and Prevention, about one in 59 children has ASD.

Prior research has suggested a potential link between mothers who use acetaminophen during pregnancy and increased risk of children with ADHD and ASD.

However, these studies have relied on women self-reporting their use of the drug.

For the new study, published in JAMA Psychiatry, the team looked at almost 1,000 mother-infant pairs from the Boston Birth Cohort between 1998 and 2018.

Researchers analyzed if the mother’s umbilical cord blood had biomarkers of acetaminophen use.

They then looked at children who were diagnosed with ADHD, ASD, both or no disorders.

Only about 33 percent were described as ‘neurotypical’, meaning they had typical developmental, intellectual, and cognitive abilities for kids of their age.

That means children were almost two times more likely to have some type of developmental disability than to have none.

However, the study has several limitations, with one being that there is no indication on whether or not mothers took the drugs in the hours before delivery, which may explain its presence.

Additionally, there is no way of telling how long a fetus was exposed to acetaminophen.

‘Over 50 percent of all pregnant women will require some form of pain relief during their pregnancy,’ said Dr Gino Pecoraro, an associate professor of obstetrics and gynecology at the University of Queensland in Australia.

More than 65 percent of women in the US and 50 percent in Europe have used acetaminophen during pregnancy to treat pain or fever.

‘There is no clear indication from this study that the taking of acetaminophen causes problems,’ Dr Pecoraro continued.

‘Until there is clear evidence of harm, we must not deny pregnant women effective analgesia nor direct them to take other forms of pain relief which may have their own recognized problems

Dr Andrew Shennan, a professor of obstetrics at King’s College London added: ‘Paracetamol is a recommended drug for use in pregnancy and will be commonly used.

‘This type of uncontrolled study does not imply paracetamol use causes autism, as the reason for taking paracetamol may be the issue rather than the drug itself, and a mechanism for it to cause harm is not clear.’

Tags:ADHD, and, autism, double, during, may, of, paracetamol, pregnancy, risk, Using
Related Posts