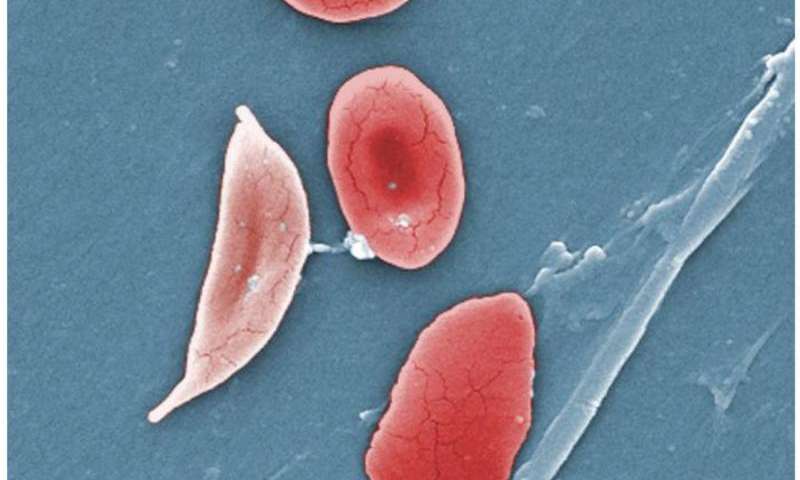 A team of Brown University researchers has developed a new computer model that simulates the way red blood cells become misshapen by sickle cell disease. The model, described in a paper published in Science Advances, could be useful in the preclinical evaluation of drugs aimed at preventing the sickling process.

“There are currently only two drugs approved by the FDA for treating sickle cell disease, and they don’t work for everyone,” said Lu Lu, a Ph.D. student in the Division of Applied Mathematics at Brown and the study’s co-lead author. “We wanted to build a model that considers the entire sickling process and could be used to quickly and inexpensively pre-screen new drug candidates.”

Sickle cell disease is a genetic disorder that affects millions of people worldwide. The disorder causes red blood cells, which are normally soft and round, to become stiff, sticky and sickle-shaped (a bit like a crescent moon). The irregularly shaped cells get stuck in blood vessels, causing pain, swelling, strokes and other complications.

At the cellular level, sickle cell disease affects hemoglobin, a protein in red blood cells responsible for transporting oxygen. When oxygen-deprived, sickle cell hemoglobin clumps together inside the cell. The clumps then form long polymer fibers that push against the cell wall, stiffening the cells and forcing them out of shape.

George Karniadakis, a professor of applied mathematics at Brown and senior author of the new research, has worked for years to better understand the disorder. Most recently, he’s worked with Lu and He Li, a research professor at Brown, to create detailed biophysical models of each stage of the sickling process, including a model of red blood cell function called OpenRBC and a supercomputer model of sickle cell fiber formation.

This new model combines and simplifies the previous models to create a single kinetic model of the entire sickling process. Using information gleaned from the detailed supercomputer models, the researchers were able to build a simplified version that captures all the important dynamics of the sickling process, yet can be run on a laptop.

To validate the model, the researchers showed that it could reproduce the outcomes of prior experiments in the lab and in people.

Because the dynamics of the sickling process can vary depending upon where in the body it’s happening, researchers designed the model to simulate sickling process in different organs. For example, because oxygen plays a key role in the process, sickling unfolds very differently in oxygen-rich areas like the lungs compared to more oxygen-poor areas like the kidneys. The model allows users to input parameters specific to the organ they’re hoping to simulate. That same flexibility also enables to model to be run for individual patients who may have more or less severe versions of the disorder.

To test the potential effectiveness of drugs, the model allows users to input the mode of action by which a drug is presumed to work, information is often gathered during preliminary lab studies. For example, if a drug is designed to boost the amount of healthy hemoglobin in red blood cells, that information can be used by the model to generate the effect on a large population of patient-specific or organ-specific red blood cells.

“Sometimes a drug can be designed to work on one parameter, but ends up having a different effects on other parameters,” Karniadakis said. “The model can tell if those effects are synergistic or whether they may negate each other. So the model can give us an idea of the overall effect of the drug.”

The researchers are hopeful the model could be useful in identifying promising drug candidates.