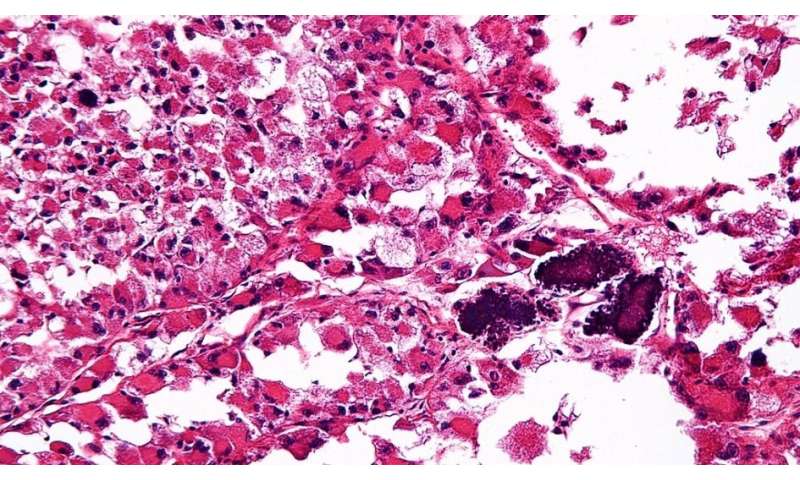 An experimental targeted drug could treat a rare type of cancer usually affecting the limbs, a clinical trial led by The Institute of Cancer Research, London, has shown.

The important trial could lead to a much-needed new treatment for patients with alveolar soft part sarcoma (ASPS), which tends to affect younger adults and does not respond well to existing treatments.

In the trial, a team led by The Institute of Cancer Research (ICR) researchers tested whether cediranib, which blocks blood vessel growth, was an effective treatment for ASPS.

Some 48 patients from 10 hospitals across the UK, Spain and Australia took part in the phase II trial, called CASPS. The results were published in The Lancet Oncology.

The trial was funded by a range of sources including Cancer Research UK and the company AstraZeneca, which owns the rights to develop cediranib (brand name Recentin).

Patients in whom the disease had already spread to other parts of the body, and had recently progressed, were allocated to receive either cediranib or placebo for 24 weeks.

To measure whether cediranib was giving benefit to the patients, the researchers analyzed the change in the sum of diameters of selected tumors which had spread from the original site.

Cediranib has a ‘significant clinical benefit’

Trial co-leader Professor Judith Bliss, Director of the Clinical Trials and Statistics Unit at the ICR, said: “Our study set out to provide some answers to the question of whether cediranib provides any benefit to patients with alveolar soft part sarcoma (ASPS), which generally affects young patients. It’s an important question because there are limited treatment options, and conventional chemotherapy is not effective for these cancers.

“Using a trial design which allowed us to monitor treatment effectiveness over 24 weeks, we showed cediranib does indeed have a significant clinical benefit for patients with ASPS, and could play an important role in the long-term management of the disease. We hope our study also leads to further studies using cediranib in ASPS and other sarcomas, alongside other potential new treatments.”