Immune cells that normally rush in to protect the eyes from infection might actually be disrupting moisturizing glands and causing dry eye, a disease that afflicts more than 30 million people in the United States.

This finding from a research team led by Duke Eye Center could lead to more effective therapies for dry eyes instead of treatments that only address symptoms.

“This study shows that some forms of Meibomian gland dysfunction (MGD) are inflammatory diseases, and our studies in mice confirm what we see in the tears of people with blocked glands,” said Duke ophthalmologist Preeya K. Gupta, M.D., a co-author of the study published July 25 in the journal Science Translational Medicine. “This pathway may be a new target for therapeutic agents to help treat patients suffering from dry eye disease and MGD.”

Whether brought on by allergies, contact lenses or our tendency to blink less while using computers and other electronic devices, dry eye disease is linked to blockages in the glands of the eyelid, called Meibomian glands. These glands secrete oils at lid opening each time you blink to retain moisture and maintain a healthy eye.

Although doctors can prescribe eyelid scrubs and anti-inflammatory drops to relieve some symptoms, scientists don’t know why the glands malfunction to begin with.

The Duke researchers found that immune cells called neutrophils, which rush in to relieve inflamed eyes, might also be disrupting the moisturizing glands.

In some people, MGD is a visible condition, marked by small off-white beads along the eyelid that look like plugged pores or whiteheads. For many others, the MGD is undetected and undiagnosed. 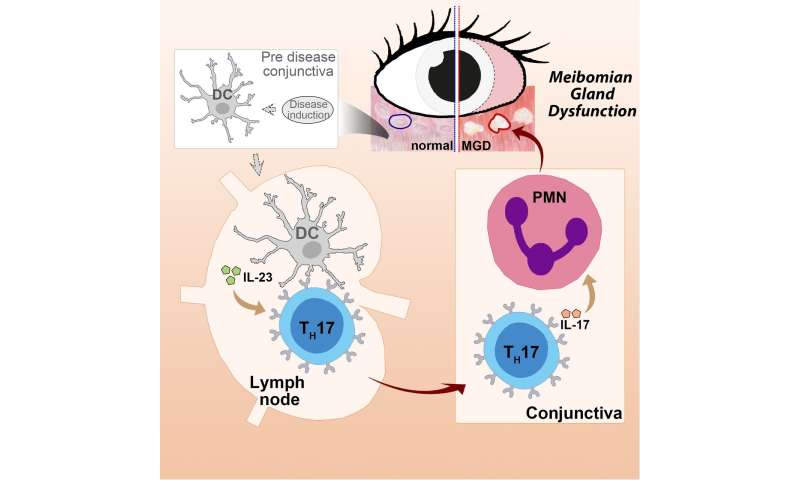 “In addition to providing new treatment strategies, the presence of neutrophils in the eye could provide a biomarker to detect the disease or measure its severity,” said Daniel R. Saban, Ph.D., senior author of the study.

Neutrophils are found in many tissues of the body. For example, when pathogens such as bacteria make their way into the gut, commanders of the immune system known as T cells identify the invader and help recruit neutrophils to fight the battle.

“When you sleep, neutrophils come into your tears,” Saban said. “We don’t know why, but they might be like the garbage truck, coming to collect all the waste while you sleep. Once your eyes open up, however, your tears become clear of these cells. But in these patients, their tears contain plenty of neutrophils even during the day.”

“The more severe the condition, the more neutrophils were present in the eye,” said former Duke scientist Nancy J. Reyes, Ph.D., who is the study’s lead author. “The correlation between blocked glands and elevated neutrophils were unmistakable in studies of mice, which had eye inflammation in the form of allergic eye disease.”

Additionally, in the 64 people whose tears were collected for the human study, elevated neutrophils were most common in people with severe MGD who also suffered from conditions causing inflammation, including allergies, rosacea and autoimmune diseases.

“The neutrophils don’t cause the blockage directly,” Saban said. “They’re being recruited around the gland and changing the actual glandular cells, which is causing them to malfunction. Even under the microscope, you can see that the glandular cells, instead of being plump and round, have changed. They look more like a shriveled raisin than a healthy grape.”

The authors stress that there are different causes for MGD, and not all might be related to inflammation from allergies or autoimmune conditions. Conversely, not all inflammation in the eye leads to blockages in the glands, they said. But for the majority of people with MGD and dry eye, the findings could be a clue to more effective treatments.