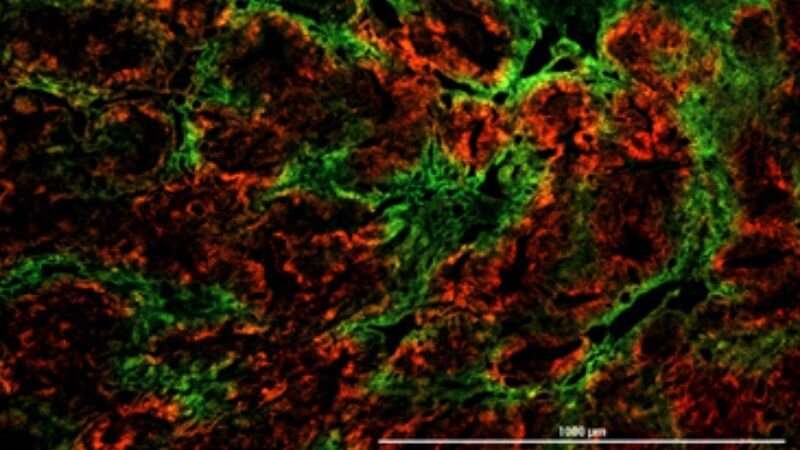 Using cells from human breast cancers and mouse breast cancer models, researchers at the Johns Hopkins Kimmel Cancer Center say they have significant new evidence that tumor cells exposed to low-oxygen conditions have an advantage when it comes to invading and surviving in the bloodstream.

The experiments mapping the “fate” of the cells in two- and three-dimensional lab-created tissue systems and in live animals specifically showed that cells from a primary cancer exposed to low oxygen levels, or hypoxia, have a four times greater probability of becoming viable circulating tumor cells—and likely spreading to distant tissues—than those under normal oxygen conditions.

The results were described Oct. 24 in the journal Nature Communications.

Gilkes and her team also identified a pattern of genetic expression in post-hypoxic cells that appears to help the cells survive oxidative stress when they enter the bloodstream. Some tumor cells retain parts of this genetic signature as a “hypoxic memory” even after they have been reoxygenated, the researchers found.

“Cancer cells tend to become more aggressive as they adapt to low oxygen levels,” says Gilkes, “but we were surprised to find that cells that were exposed to hypoxia in the primary tumor maintained their aggressive features even when they were reoxygenated in the blood.”

In the future, the unique features of the hypoxic cells might be used as biomarkers to identify patients at risk for metastasis, or might be targeted directly by therapies to prevent or limit metastasis, the research team suggested.

Hypoxia occurs in 90% of solid tumors and is known to have an adverse impact on a patient’s prognosis. However, little is known about how tumor cells change in response to low oxygen. Gilkes says most research teams—including her own—grow and experiment with tumor cells using the same oxygen concentrations as normal air.

“This is actually a much higher level of oxygen than what is found in our bodies,” Gilkes says. “For example, the average concentration of oxygen in breast tissue is on the order of 6% to 8%, whereas solid breast tumors have a gradient of oxygen concentrations that reach much less than 1% oxygen in some regions.”

For their new experiments, designed to capture the changes that occur as normal breast cells become malignant, Gilkes and colleagues developed an experimental system that uses oxygen as a switch to make tumor cells “light up” with a fluorescent marker after they are exposed to low oxygen conditions of 0.5% or less, comparable to the levels measured in human tumors.

The study’s first author and member of Gilkes’ lab, Inês Godet, used this marker to follow the fate of these cells as they multiplied and moved around within 2-D and 3-D tissue “spheres ” and “mini-organs” created in the laboratory, as well as in live mouse models of breast cancer.

Using fluorescence activated cell sorting to capture red or green (oxygen deprived) breast cancer cells, followed by RNA sequencing, the team found that the expression of many gene products, including integrin alpha 10 (ITGA10) and ceruloplasmin (CP) are induced in cells that experienced hypoxia within tumors, but not in cells exposed to hypoxia in the lab. The tumor-based hypoxia pattern was also better at predicting the survival of patients free of distant metastases, they concluded after studying similar genetic expression data from primary tumors from more than 1000 patients with breast cancer.

Among the next questions to answer, say the researchers, are whether post-hypoxic tumor cells at metastatic sites are more resistant to chemotherapy than other cells and whether targeting these post-hypoxic cells will be beneficial for treating patients with metastatic cancers.