New research from the Department of Food Science (FOOD) at the University of Copenhagen suggests that in the not-too-distant future, it might be possible to drink a cocktail of selective viruses (bacteriophages) that travel directly into the gut and kill the disease-causing bacteria without the use of antibiotics, and without harming the beneficial commensal intestinal bacteria.

“The research shows that we have an opportunity to kill specific bacteria without collateral damage to otherwise healthy intestinal flora,” says Professor Dennis Sandris Nielsen from Department of Food Science at the University of Copenhagen. He emphasizes that the result was created in a model of the small intestine, so the next step will be to test the study on mice and later on humans if such treatment is to be implemented.

Model of the small intestine 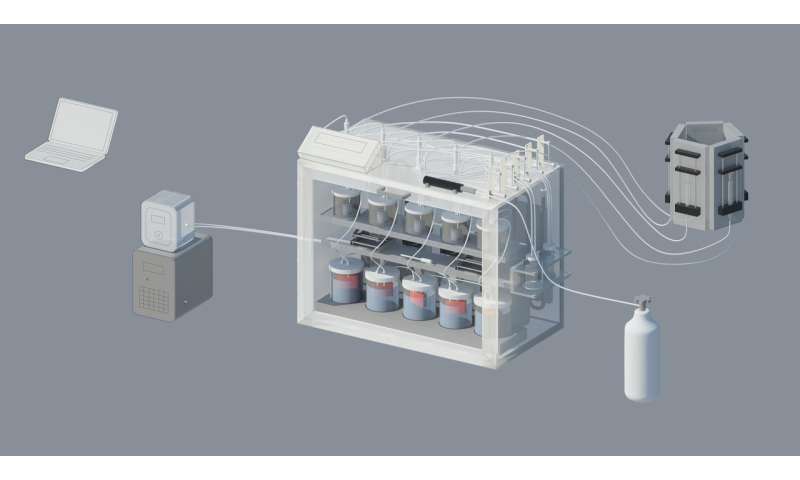 The model in which the research has been conducted, TSI, was developed at FOOD by postdoc Tomasz Cieplak, in connection with his Ph.D. project, with Professor Dennis Sandris Nielsen as his supervisor. “The novelty of the TSI model is that it simulates the presence of the small intestinal microbiota, which has largely been overlooked in other models of the small intestine. Other models existing on the market simulate only the purely biophysical processes, such as bile salts and digestive enzymes or pH, but here we included this important aspect of human gut physiology to mimic the small intestine more closely,” says Cieplak.

New research in an old method

“Using bacteriophages to kill pathogenic bacteria is not new, and has actually been used to treat food-borne illnesses and other diseases in Eastern Europe for almost a century, but it was not until relatively recently that this approach started to attract more widespread research interest,” says Dennis Sandris Nielsen

The research into combating infectious diseases with viruses was not as interesting because you already had an effective treatment with antibiotics. “It is different today, where resistance to antibiotics is an increasing problem in modern medicine. At the same time, we have become more aware of how important the commensal bacteria in the gut are for our health,” says Nielsen.