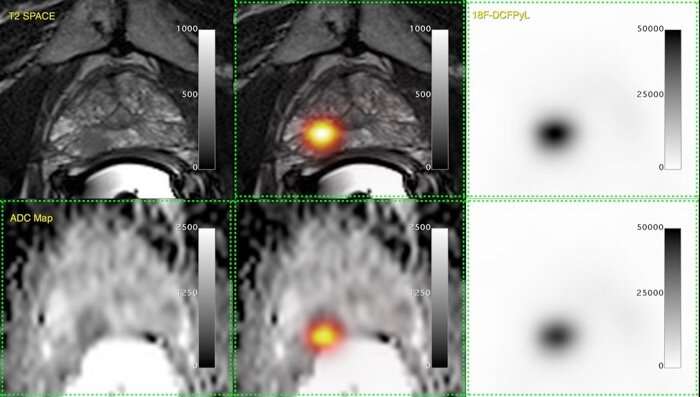 A new study looks to move doctors and patients closer to earlier and more precise detection of recurrent prostate cancer that would clarify treatment decisions and lead to more confident courses of action and better health outcomes.

A multi-center trial registry testing the use of a new imaging tracer—prostate specific membrane antigen (PSMA) – is targeting men who have been diagnosed with prostate cancer, have had treatment, and are now concerned the cancer may have returned.

“PSA (prostate specific antigen) is highly sensitive test at telling us if the cancer might be returning. But the challenge has been that the cancer is usually most treatable when levels are still quite low,” explained Western Oncology professor Glenn Bauman.

Standard PSA blood tests often indicate a cancer is returning even before the location of the tumor is detected by a bone scan or computed tomography (CT) scan.

“You do regular imaging and it’s a frustrating situation. We know there’s a problem; we don’t know where it is, so you’re not sure what treatment should be offered,” Bauman said.

“In the past, we had to go on the balance of probability. We think it’s still localized to this area, so more treatment to this area, or we’re not sure, so we’ll put you on hormone therapy which will treat it wherever it is, but it has its own side effects.

“Being able to better understand where the cancer is helps you choose between those options and offer a given treatment with a bit more confidence.”

“This will help us determine if the cancer could be at site where we need to offer radiation, whereas if it’s seen in multiple locations, the patient probably needs hormone therapy or drug treatment,” Bauman said.

The trial is providing valuable insights to research participants like 71-year-old Wayne Smith who was diagnosed with prostate cancer in 2013 and made the decision to have his prostate removed. After some time, his PSA levels began to rise and doctors were concerned the cancer was coming back.

“I was told a PET scan was available through research and that it could help locate the disease,” said Smith, who went for the scan earlier this year at St. Joseph’s Hospital. “Nothing showed up on the scan, but that was good news; it meant the cancer was microscopically small.”

Smith and his doctors decided on hormone therapy and radiation therapy to eradicate any cancerous cells.

“Early evidence suggests a clear PET scan, despite rising PSA levels, is likely associated with persistent cancer at the original site,” said Bauman, a Lawson Health Research Institute scientist. “Based on the scan, Wayne was able to do a much shorter round of hormone therapy—six months rather than being on hormone therapy indefinitely.”

Led by Bauman, along with Drs. Ur Metser and Tony Finelli at University Health Network, the ongoing trial is testing the use of the new tracer at five sites in Ontario, including London, Hamilton, Toronto and Thunder Bay, with testing to begin soon in Ottawa.

Considered an ‘investigational agent’ in Canada, the PSMA tracer is currently only available through clinical trials. After studying the accuracy of the tracer, Bauman hopes to have enough data to recommend when it could be used in the clinic.

“Every new test has its limitations. We have to have a formal registry study and allow us to track the results,” said Bauman, noting Australia and Germany already use a variation of this test.

Looking to recruit up to 1,500 men for the study, researchers “want to know how to better incorporate this as part of our routine care—to reassure ourselves and Health Canada that this is a test to be approved.”