While living in a mother’s womb, cushioned by amniotic fluid and protected from the outside world, babies have only minimal exposure to microorganisms like bacteria and viruses. Shortly after birth, a newborn’s collection of microorganisms – their microbiome – begins to develop as a succession of bacteria colonizes their gut.

A variety of factors, such as mode of delivery (cesarean or vaginal birth) and antibiotic use, influence this population of bacteria. After that, human milk serves as a primary way more bacteria are introduced to a baby’s system, as it can contain up to 700 different species of bacteria.

In my research as a chemist, I’ve been focusing on the complex sugars that human milk contains. My colleagues and I are interested in how these sugar molecules help mold a baby’s microbiome and contribute to overall health. Ultimately we hope that knowing more about individual molecules in human breast milk will lead to the development of better infant formulas that can be used in cases where breastfeeding isn’t possible.

You’ve probably heard that breast milk provides all the energy requirements, vitamins and nutrients that an infant needs. In fact, the World Health Organization recommends exclusively breastfeeding babies for the first six months of life when possible. Unfortunately there are a number of reasons that breastfeeding can be a challenge to keep up; and indeed, only about a quarter of American babies meet that guideline.

Researchers know human milk contains two types of simple proteins, whey and casein, which are easily digested. It also has complex proteins including lactoferrin, which inhibits the growth of iron-dependent bacteria, and secretory IgA, which protects the infant from viruses and pathogenic bacteria. It provides a number of essential fats that are necessary for brain development, vitamin absorption and nervous system development.

And then there are the complex sugars called human milk oligosaccharides or HMOs that have long been neglected by the scientific community. As trained organic chemists, my team took an interest in HMOs precisely because not much was known about them. A few studies had found that these sugars were food for good bacteria, but not the pathogenic ones. It seemed like there must be more to the story. We also knew we’d be able to synthesize in the lab any molecules we identified as important. 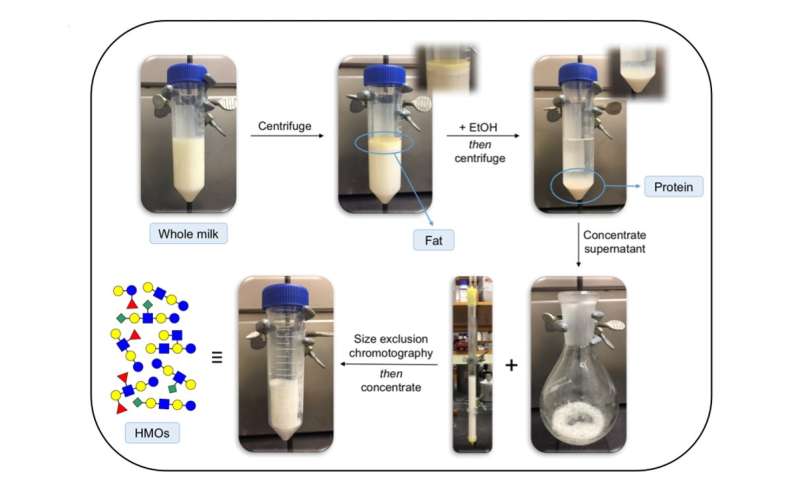 These complex sugars in human milk appear to provide a growth advantage for good bacteria. For example, breastfed infants have a microbiome rich in two species of bacteria: Bacteroides and Bifidobacteria. Both species are symbiotes, meaning they live with us on a daily basis, but typically cause no harm. They live in the human gut where they use human milk oligosaccharides as energy sources to grow, whereas pathogens do not. Breastfed babies tend to be colonized to a lesser extent by infectious species, meaning they get sick less.

Many of the protective properties of human milk have been attributed to its HMO component. For instance, research has shown that HMO supplementation shortens the duration of rotavirus infection – one of the leading causes of diarrhea in infants.

Bovine milk, which most formula is based on, however, contains a negligible oligosaccharide component. Additionally, bovine milk oligosaccharides lack the structural complexity and diversity of HMOs. So formula-fed infants do not obtain comparable oligosaccharide-fostered protections to those who are breastfed.

A case study: Group B strep

Based on these known effects of human milk oligosaccharides, my research group took an interest in Group B streptococcus. All mothers-to-be are screened during the third trimester of pregnancy for Group B strep; although it isn’t much threat to a healthy adult, this bacteria can be passed to the baby during labor and birth, with an increased risk of infection.

We noted that, even though Group B strep bacteria are present in breast milk, children who breastfeed are not at increased risk for Group B strep infection. Why? Could HMOs be providing protection against this bacteria?

To investigate, our team worked to isolate the complex sugars contained in donated human milk. With these molecules in hand, we began to test whether HMOs acted as antibiotics against Group B strep. In an initial study, we tried to grow Group B strep both in the presence and absence of HMOs. It turned out that HMOs do prevent the growth of Group B strep bacteria.

We also observed that different women produced HMOs with varying levels of antibiotic activity. This was not surprising as there are over 200 different HMOs in breast milk. Every woman produces a different set of sugars and they change during lactation. In followup studies, we showed that HMOs have antibiotic properties against a number of additional pathogens, including staph.