Mike Parry’s Damascene moment came when his daughter asked him for a football and a tennis racquet for Christmas, and it occurred to him that he was in no shape to kick or hit a ball around. Up to that moment, the 47-year-old hadn’t given much thought to his health.

“Despite the fact that I was creeping towards my late forties, it didn’t occur to me to be worried. It just wasn’t something I was particularly interested in, and there wasn’t any reason to make time for it,” he says. Every morning, he’d head straight to his desk job, skipping breakfast. His evenings were taken up by client appointments or a decompressing drink at the pub.

But major lifestyle overhauls are rarely easy. Knowing he wouldn’t be able to do it alone, Mike signed up with a personal trainer at Ultimate Performance gym in Manchester. “It was nine miles away, and everybody said I was mad to go there every day. Having not stepped in a gym for over 20 years, I was also concerned about whether I would even fit in, whether it was something I could actually do, whether I would be embarrassed. It was pretty much a new world for me.”

Parry was also managing existing injuries to his elbow and shoulder, so his training had to be accordingly. “There was always something the trainers could come up with that would allow me to do exercises in a certain way without affecting existing or historical injuries.”

The major changes to his diet and routine were tough for the first few days. “I was on a low-carb diet to start with, and I did start to feel a bit tired, which apparently is common,” he says. “But within a week, I started to feel more alert, less sluggish. I was a lot more active, and I was actually sleeping seven to eight hours a night.”

Now, more than 70 pounds lighter, he still finds his transformation somewhat baffling: “You often see these before-and-after pictures on social media and you think, ‘Yeah, OK.’ I didn’t consider that it could one day be me. All I wanted to do was be in a position where I could play sports with my daughter.” His confidence has also improved hugely: “I am able to buy clothes that fit me properly, that look good as well, that allow me to go out and socialise in places that I wouldn’t have necessarily gone before.”

As for his daughter’s verdict? “She said how incredibly proud she was… and that I should carry on no matter what.”

Try the Workout for Yourself

Parry trained three times a week, Monday, Wednesday and Friday. In order to recover faster in between sessions and further improve his cardiovascular system, he also had to perform 10K walks in between sessions. Here are some of his go-to supersets, from trainer Anthony Paulhe.

1A: Static Lunge x10
Parry started with 10 reps, building up to 15, eventually adding weights when he was confident with the movement.

1B: Diverging Row x10
Lunges were paired with 10 reps of this posture-improving back exercise. After 10 reps, go back to the lunge, for three rounds total.

Pause at the bottom for a second to strengthen the glutes and quads in the weakest position of the exercise.

2B: DB Shoulder Press x10
By alternating between upper- and lower-body, both body parts get more rest for greater quality of execution. Do three rounds. 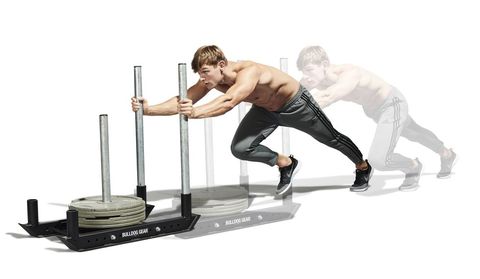 3A: Prowler Push
The prowler is a valuable exercise, requiring low skill and technique. Charge back and forth across the length of your gym.

3B: The Plank
As well as building core strength, the plank teaches proper hip and shoulder positioning. Repeat for three rounds, or five if you’re fit enough.