A heartbroken mother has told how she will carry her unborn twins to full-term – even though one of them has died.

Becki Van der Land and husband Cees were overjoyed to learn they were expecting both a son and a daughter earlier this year.

But at the 12-week scan the couple, from Allendale, Northumberland, were told the girl was much smaller than her twin and was struggling.

Tragically, her heart stopped beating five weeks later, and doctors have since found out she had a genetic condition.

As well as coping with the death of daughter, the devastating news also meant Mrs Van der Land, 35, was at risk of losing the boy baby as well.

But he is growing well, and Mrs Van der Land is ‘still looking forward to meeting both babies’ in around four months, even though one will never come home. 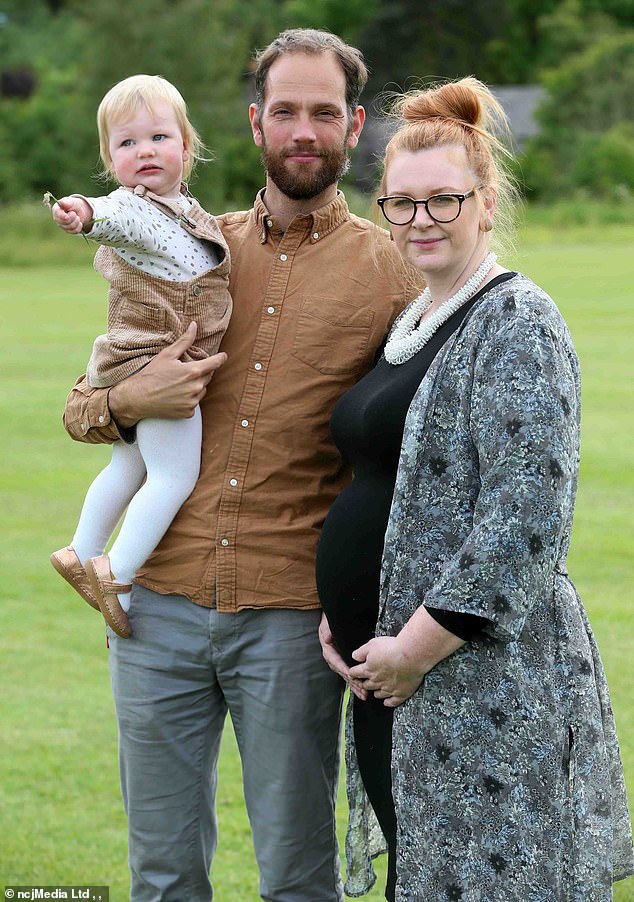 Becki Van der Land, 35, and her husband Cees lost their twin baby girl at 17 weeks pregnancy. But Mrs Van der Land will carry both twins to full term. Pictured with their daughter, Ottilie 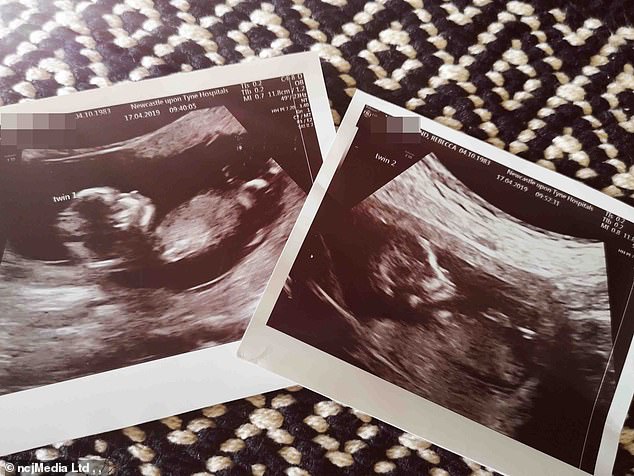 Doctors have since discovered the demised baby twin had a genetic condition which restricted her growth. Pictured, scans of the twins in the womb

Mrs Van der Land, a dental technician, said: ‘She’ll be born at the same time as her brother, hopefully in four months’ time.

‘It shouldn’t impact the birth too much, except psychologically.

‘I’m feeling really positive – it’s what you make of it, so it’s still a very positive experience.

‘It’s going to be the only time we get to spend any time with her.’

The death of one twin in the first trimester occurs in fewer than seven per cent of twins, according to research.

After 20 weeks, death of one twin would be described as a ‘late loss’, between 0.5 and 6.5 per cent of all twin pregnancies.

It mostly happens with monozygotic (identical) twins. Known as demise of a twin, it may be due to a wide range of conditions. If it is genetic, the identical twin may also suffer the same problems.

In early pregnancy, once the twin dies, most of it will be absorbed leaving behind a small flattened remnant known as the foetus papyraceous.

In later pregnancy, it becomes compressed between the other twins’ sac and the uterus wall, forming a foetus papyraceous.

With proper care and management, review of studies, the other twin can still be born.

The outcome for the other twin’s health will depend on when the demised twin passes and whether the twins share a placenta.

A co-twin demise in the first trimester doesn’t appear to increase risks to the other twin.

For twins that share a placenta, generally the outcome for the other twin is not good.

Sharing a placenta with the demised twin can lead to anaemia, low blood pressure or restriction of blood flow. This can cause death or brain damage in around 50 per cent, according to literature.

For twins that do not share a placenta, the risk of death or damage is much lower for the surviving twin.

There is controversy and a lack of strong evidence regarding the best time to deliver the baby.

Mrs Van der Land and her 39-year-old husband, an earth sciences lecturer at Newcastle University, had dreams of starting a family when they married two years ago.

‘It was part of our wedding vows to have children, and we were thinking three,’ said Mrs Van der Land.

Their dream came true for the first time 18 months ago when she gave birth to their daughter Ottilie.

Mrs Van der Land said: ‘Then we were ecstatic to find out we were expecting boy/girl twins earlier this year.

‘I sort of knew straight away it was twins because it felt completely different to my daughter.

‘I also had a strange feeling that something wasn’t quite right.

‘On the first scan they both looked perfect, but at 12 weeks the little girl looked smaller, so we had scans every week.

‘They said she was showing signs of struggling and was quite a bit smaller than her brother.’

What followed was two months of tests at the Fetal Medicine Unit at Newcastle’s Royal Victoria Infirmary.

Unfortunately at 17 weeks the family learned that the little girl’s heart had stopped beating.

They have since found out that she had chromosomal translocation, which is when chromosomes form abnormally.

Either pieces of chromosomes break off and swap places, or a chromosome gets attached to another one.

The baby had a chromosomal translocation called 15q26-qter deletion syndrome, and she had lost her IGF1R gene – a gene for growth.

This meant she had severe interuterine growth restriction.

Mrs Van der Land said: ‘Grieving for your lost baby whilst still carrying her and her co-twin is a bittersweet and unexpected situation to find yourself in. 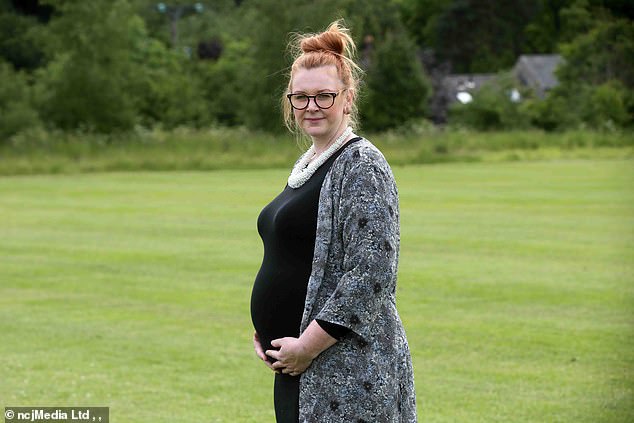 Mrs Van der Land, from Allendale, Northumberland, is ‘still looking forward to meeting both babies’ in around four months’ time, even though one will never come home

‘We were really upset but at the same time we were in quite a privileged position in that we had time to prepare ourselves for the sad news.

‘The death of a twin puts you at high risk of also losing the surviving co-twin so we were again warned to prepare for the worst.’

But Mrs Van der Land is still pregnant and growing rapidly, with the surviving boy twin looking strong and healthy.

Mrs Van der Land said: ‘Carrying life and death now continues to make this pregnancy very special but in a completely different way to what we envisaged.

‘We still talk about our girl twin as much as we do our boy twin. We have chosen their names which we look forward to announcing after they are born, just as we would have done if we hadn’t lost our girl.’

Mrs and Mr Van der Land are now raising money in their daughter’s memory for the refurbishment of the counselling rooms at the RVI’s Fetal Medicine Unit.

She said: ‘We can’t thank all the staff enough. Their care made the world of difference at one of the worst times of our lives.’

And on Saturday keen runner Mr Van der Land, who is a member of Tyne Bridge Harriers, is taking part in The Spine Race – a non-stop, seven day, 268 mile race from Derbyshire to the Scottish Borders.

Mrs Van der Land said: ‘All sponsorship received will go towards the costs of refurbishing the counselling rooms. Their aim is to make them softer in decoration with sympathetic lighting, furniture and artwork to create a homely setting.

‘Contributing will also leave a little legacy for our girl twin who we won’t get to take home with her brother but who we will never forget.’