Russian girl, six, born with no lips or chin flies to London for pioneering surgery to rebuild her face and finally let her eat, speak and smile

A Russian girl born without lips or a chin has flown to London for pioneering treatment to rebuild her face.

Darina Shpengler has never officially been diagnosed but is thought to have a rare condition called Nager syndrome.

As soon as she was born, doctors reportedly recommended her mother Elena Shpengler, 47, ‘abandon’ her baby to become an orphan.

Mrs Shpengler and her husband Yury, 49, left the remote village they called home when their family cruelly rejected Darina.

With Russian medics being unable to help, the six-year-old is due to have life-changing surgery at Great Ormond Street Hospital today.

Mrs Shpengler hopes the procedure will allow her daughter to eat and gain weight.

But most of all, the mother hopes the surgery will give her a mute daughter a voice, which she says will be the ‘best harmony’. 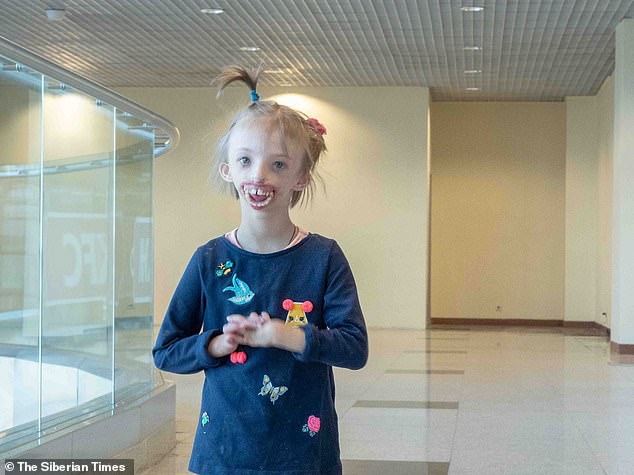 Darina Shpengler was born without lips or a chin in what is thought to be a rare condition called Nager syndrome. The six-year-old is pictured at an airport in her native Siberia preparing to fly to London for surgery to rebuild her face at Great Ormond Street Hospital 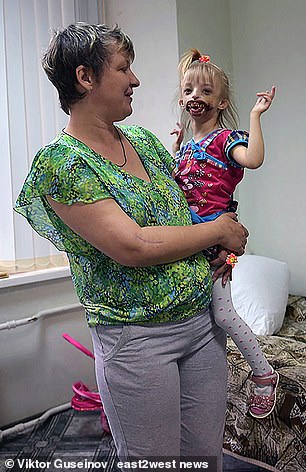 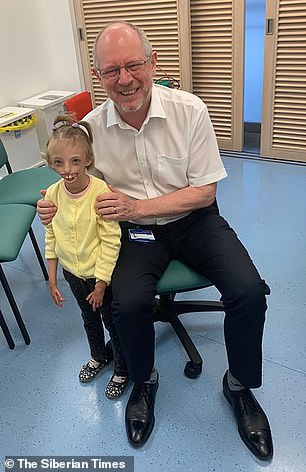 Darina, who weighs the same as a one-year-old, is pictured left with her mother Elena Shpengler. Surgeon Professor Dunaway will oversee her treatment (pictured together right)

Speaking of her daughter’s upcoming operation, Mrs Shpengler told The Siberian Times: ‘My every thought and hope is for the surgery to go well, because it would mean Darina would be able to eat and she’ll start gaining weight.

‘She will start breathing better and hopefully will grow up, and won’t get sick as often as she does now.

‘She will start playing with other children because they won’t be scared of her.’

But most of all, Mrs Shpengler, who lives with her family in the Krasnoyarsk region, is excited to hear Darina talk.

Although excited for her daughter’s surgery, Mrs Shpengler also has some reservations.

She said yesterday: ‘Like any mother of a child with such a long illness history I am nervous of what tomorrow brings.

‘But also I am incredibly grateful to everyone who helped us get this far.’

Darina is being cared for by Professor David Dunaway, who is head of the craniofacial unit at Great Ormond Street.

The youngster’s treatment is expected to cost £67,400 ($85,390) and is being funded by the Russian-based charity Rusfond.

Despite feeling apprehensive, Mrs Shpengler, who cares for Darina full-time, is determined to stay positive.

‘I never thought it would be possible to see an expert of the level of Professor Dunaway and I firmly believe in the surgery’s success,’ she said.

‘We need all our powers to help Darina. We need to raise and support her, she has a lot to overcome.’ 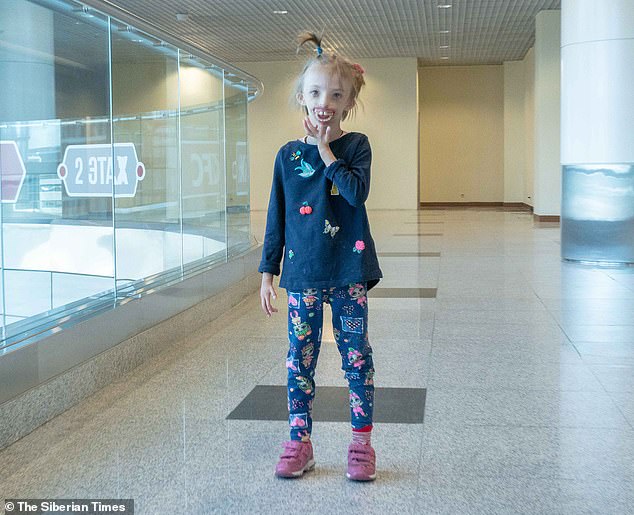 Darina (pictured at the airport) bleeds from the mouth ‘constantly’ and struggles to eat, which makes it difficult for her to put on weight. She is also unable to speak. Her mother hopes the surgery will give the youngster a voice, which she says will be the ‘best harmony’ 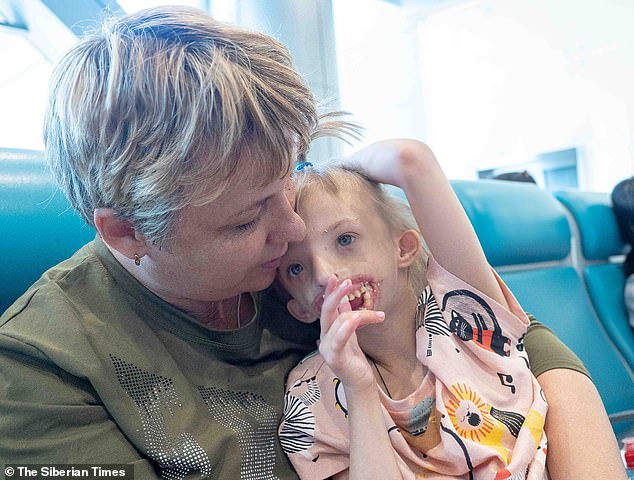 Mrs Shpengler (pictured with Darina at the airport) claims doctors initially told her to ‘forget’ her daughter and let her become an orphan. Refusing to give up on her baby, Mrs Shpengler took Darina home, only to be shunned by nearly all of their family, who refused to accept her 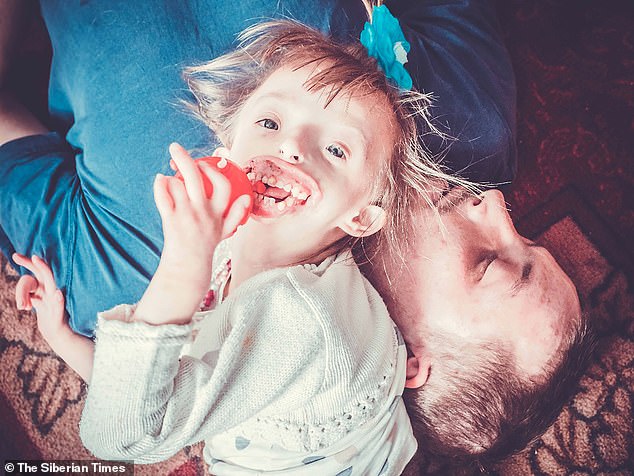 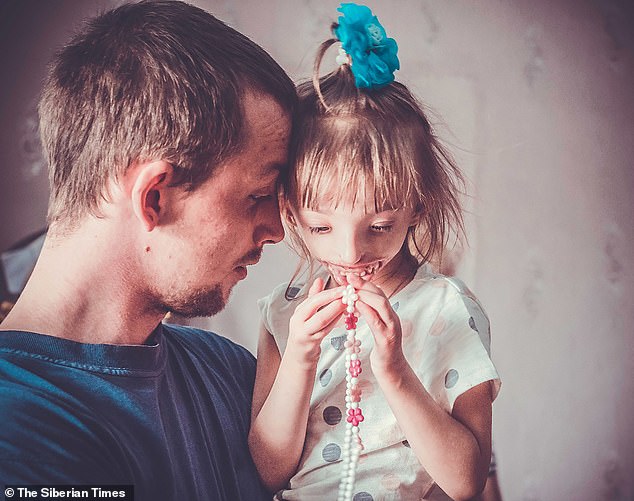 WHAT IS NAGER SYNDROME?

Nager syndrome is a congenital condition that affects the bones and tissues in the face.

More than 100 cases have been reported, according to the National Organization for Rare Disorders.

Nager syndrome is thought to occur due to problems early in pregnancy when the cheekbones, eye sockets and jaw are developing.

This causes the characteristics sloping eyes and small jaw.

Some patients also have affected arms, hands, legs and feet.

And their ears may be missing or very small.

Doctors suspect Nager syndrome is a genetic disorder that is caused by a mutation on a specific gene.

However, this gene has not been identified.

If the jaw is severely underdeveloped, breathing and feeding may be difficult.

Some patients also have hearing impairments and stiff limbs.

Nager syndrome is usually treated via surgery, which can include craniofacial and cosmetic operations.

Stabilising a child’s breathing is the first step, with some requiring an opening into their windpipe.

Later in childhood, patients may have bone grafts to rebuild their jaw, as well as ear reconstruction.

‘I begged them to to show me,’ she said.

‘The nurse looked at me and asked, “are you ready to see it?”.

Mrs Shpengler went over to the incubator Darina was lying in and saw her daughter’s deformity for the first time.

‘I fell into darkness and lost consciousness,’ she said.

‘I was taken to intensive care, where the doctors suggested I leave the baby in the hospital. But I strongly refused.’

Despite Mrs Shpengler’s dramatic reaction, her husband, who was recovering from a car crash in another hospital, was unfazed.

‘His face did not change when he saw Darina,’ Mrs Shpengler said.

Mr Shpengler reportedly told his wife: ‘She is ours, our girl.’

After overcoming her initial shock, Mrs Shpengler spent the night trying to comfort the newborn, who was crying in pain and had bleed seeping from her mouth.

‘It is so horrible when you see a crippled and crying baby and you are unable to help,’ Mrs Shpengler said.

‘I understood she was in pain. Her mouth is constantly open and all the time in blood.’

While the new parents managed to pull themselves together, almost all of their family immediately shunned the newborn. 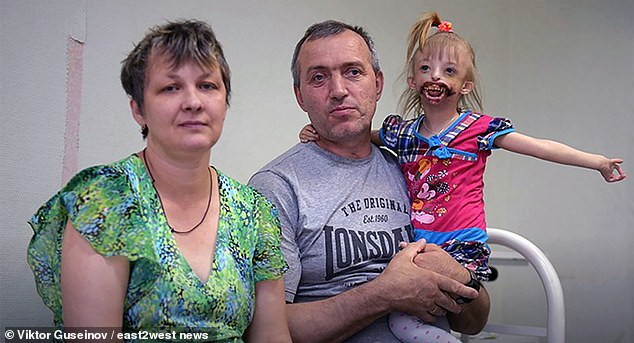 Mrs Shpengler fainted when she saw her daughter for the first time. However, Darina’s father Yury (pictured) was unfazed. He even faces up to strangers who stare, saying ‘we accept her’ 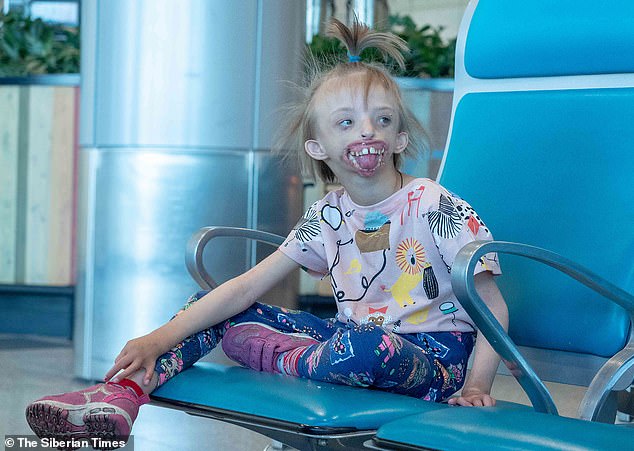 Darina’s mouth even led some relatives to grow suspicious her parents had deliberately hurt her. Not long after she was born, her mother received a call from police ‘demanding answers’ 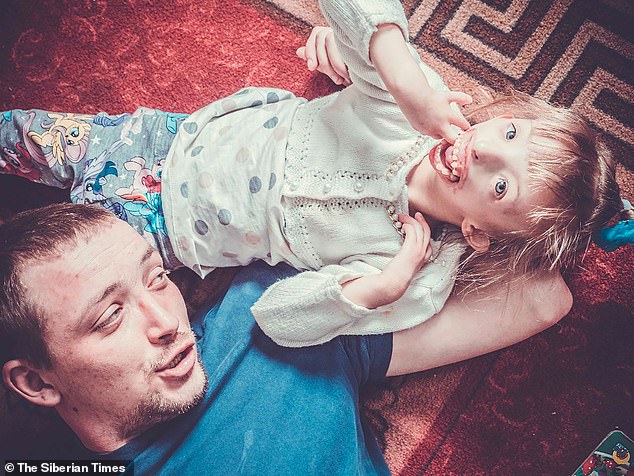 Darina plays with her brother, but her parents worry ‘nothing can replace friends’ 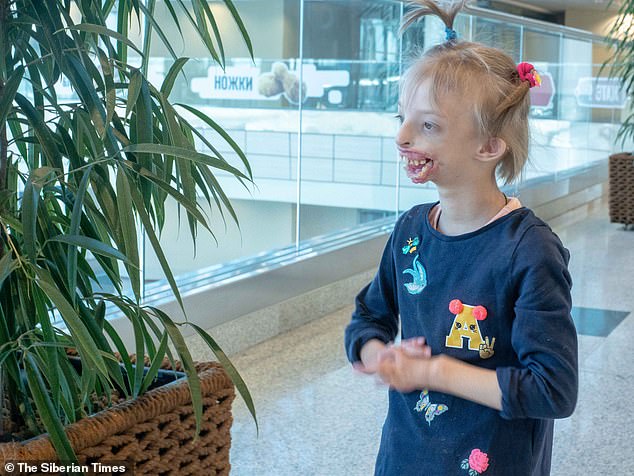 ‘Only my sister supported me,’ Mrs Shpengler said. ‘All other relatives just stopped any communication with us.

‘My brothers, their children, my husband’s mother – nobody wanted to accept Darina.’

As if being rejected by their relatives was not bad enough, the parents’ so-called loved ones even accused them of damaging Darina’s mouth themselves.

‘I got a call from the police,’ Mrs Shpengler said. ‘They demanded explanations. 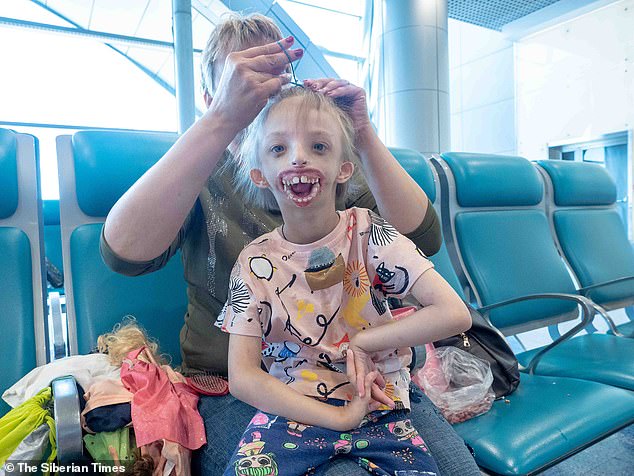 Despite all she has endured, Mrs Shpengler insists Darina is a happy, ‘sociable girl’ 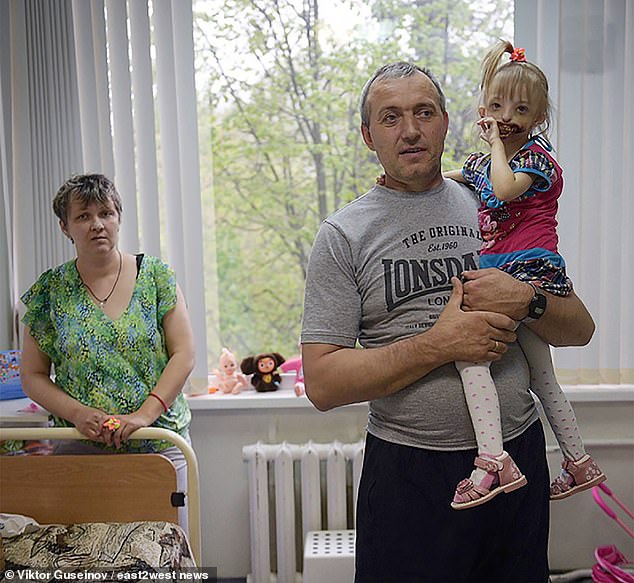 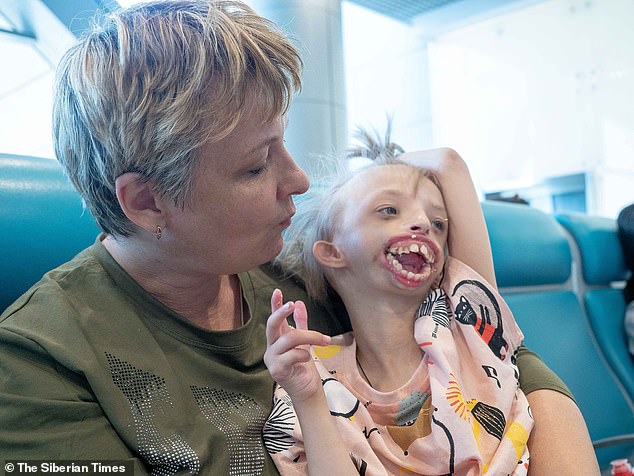 Darina, who reportedly weighs just 25lbs, cannot speak but is still aware of how other people react to her.

‘I want people to stop pointing fingers at her so she doesn’t feel unhappy,’ Mrs Shpengler said. ‘Darina is now old enough to understand everything.

‘Can you imagine, we go into the shop, see our own relatives, and they immediately go out, asking their children not to look at us?

‘Darina cannot express her feelings with words, but I can see that just like me she is excited to see the doctor.’

Despite the public’s reaction to her daughter, Mrs Shpengler refuses to hide Darina away.

Speaking in an interview three years ago, she said: ‘We do not hide Darina from people. We take her everywhere with us.

‘My husband Yury does not feel ashamed either. He takes Darina everywhere.

Surgeon Orest Topolnitsky, who operated on Darina in Russia, added: ‘We know this family has problems with relatives who have not loved this girl from the very beginning.

‘Some people have no hearts, it is so shocking.’ 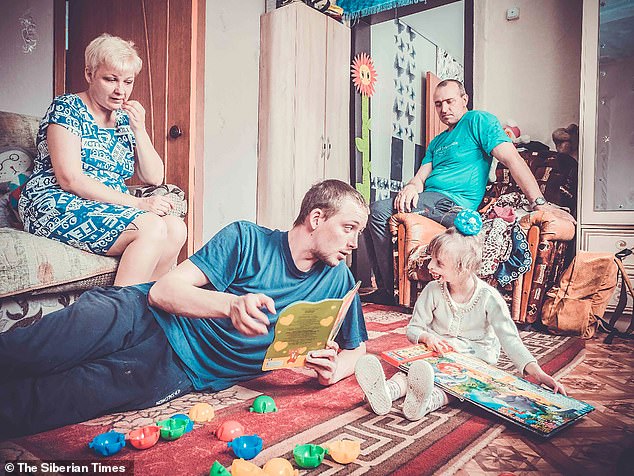 Darina has been banned from nursery over fears her appearance will upset the other children. Pictured with her parents and brother, a teacher comes to their home twice a week 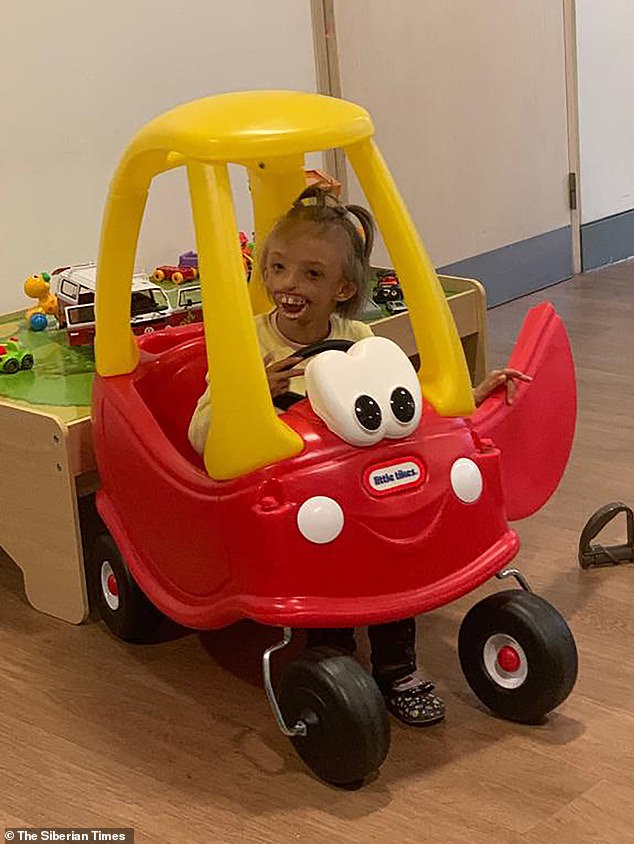 Mrs Shpengler even claims Darina was banned from nursery over fears her appearance would distress other children.

‘We were told the other children would be scared,’ she said. ‘Instead, social services sent two teachers to come to Darina once a week.’

Despite all she has endured, Mrs Shpengler insists Darina is a happy little girl.

‘She is such a sociable girl,’ she said. ‘We have bought lots of toys for her but nothing can replace friends.’

Darina even ‘likes to sing’ and hums melodies but cannot pronounce words. ‘She loves to put on clothes and look at herself in the mirror,’ Mrs Shpengler added.