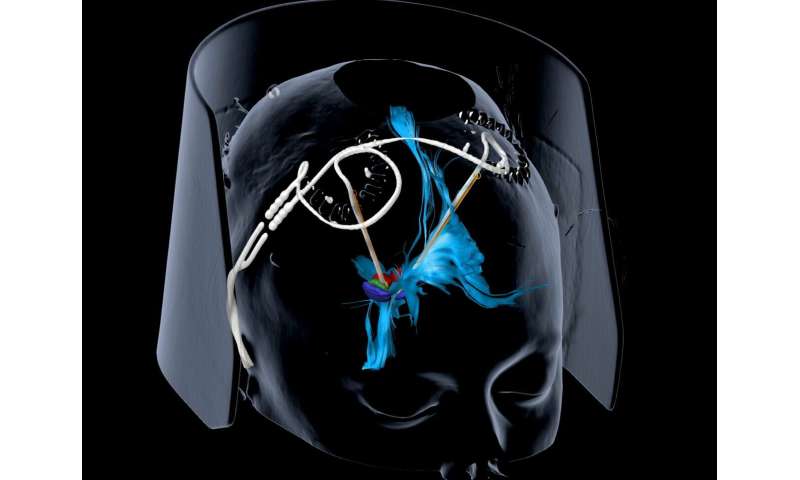 Patients suffering from severe, treatment-resistant depression can benefit not only acutely but also the long term from deep brain stimulation, as researchers from the Medical Center – University of Freiburg and their colleagues from the University Hospital Bonn demonstrate in a current study. The team used thin electrodes to stimulate a deep seated part of the reward system in the brains of 16 patients. This led to a significant reduction of ratings of depression severity in all patients, by half on average. For half of the study participants, it was even reduced below the level regarded as the threshold for depression requiring treatment. Most of the patients experienced those positive stimulation effects within the first week, and they lasted throughout the course of the one-year study. The study was published online in the Nature journal Neuropsychopharmacology on Thursday, 14 March 2019.

“The most compelling outcome from the study is the sustained efficacy in very severely ill patients. Most treatments in psychiatry cease to be efficacious after months and years. We demonstrated in a relatively large-scale study that deep brain stimulation is a real option for those patients suffering from severe, treatment-resistant depression,” says group leader Prof. Dr. Thomas Schläpfer, head of the Division of Interventional Biological Psychiatry at the Medical Center – University of Freiburg.

Success after Dozens of Unsuccessful Treatments

An estimated 10 to 30 percent of all people with recurring depression do not respond to approved treatments. Deep brain stimulation could be a treatment option for some of these patients. The 16 participants in the FORSEE-II study had suffered from severe depression for eight to 22 years, and had previously undergone an average of 18 drug therapies, 20 electroconvulsive therapies, and 70 hours of psychotherapy without success.

Prof. Dr. Volker A. Coenen, first author of the study and director of the Stereotactic and Functional Neurosurgery Unit at the Department of Neurosurgery of the Medical Center – University of Freiburg, and his team implanted the deep brain stimulation systems in the patients medial forebrain bundle of the brain and used them to stimulate the medial forebrain bundle. This brain region is involved in the perception and regulation of pleasure and reward and is thus also significant for motivation and the perceived quality of life.

The doctors evaluated the success of the therapy monthly with the help of the established Montgomery–Asberg Depression Rating Scale (MADRS). The MADRS scores of 10 study participants decreased significantly within the first week and remained at a low level. All study participants reacted to the stimulation in the course of the study. Eight of the 16 patients had a MADRS score of under 10 points at the end of the study and thus were regarded as non-depressive.

“Our patients had struggled with severe depression for years with no signs of improvement. Deep brain stimulation brought most of them significant relief within days, which lasted throughout the course of the therapy. Other forms of treatment like medication and psychotherapy often lose their effectiveness over the course of time. Absolutely sensational about the study data is that the effect seems to be long lasting, with the positive effects continuing for years,” says Prof. Schläpfer.

“We know from a pilot study that the stimulation of this brain region is very promising and we are delighted about the replication of these significant effects,” says Prof. Coenen.

Hopes for European Approval of the Method