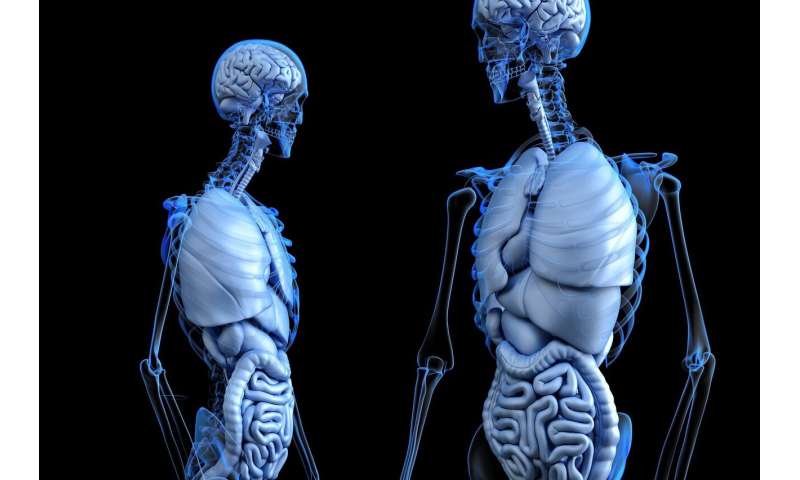 Using an unbiased labeling technique, mathematical modeling, and single cell profiling to trace the footsteps of stem cells and their daughters, researchers at the University of Cambridge (UK), DGIST (S.Korea), and IMBA (Institute of Molecular Biotechnology of the Austrian Academy of Sciences, Austria) have confirmed that two populations of adult stem cells with distinct roles and characteristics reside in the glands of the stomach.

The gastrointestinal (GI) tract is an organ system that takes in food, extracts nutrients and removes waste. The GI lining suffers much abuse from the abrasive food we ingest, and must constantly renew itself to maintain healthy function. The leading role of this renewal is played by adult stem cells—undifferentiated cells that divide to replenish damaged cells, regenerate tissues and prevent premature aging. The lining of the stomach—or gastric corpus epithelium—is the thickest part of the GI tract, and within it are corpus glands—narrow, rabbit-hole like structures divided into distinct areas: the base across the bottom; the neck, isthmus and pit moving upwards toward the body of the stomach. Each area contains distinct cell types, one category of which is isthmus stem cells (IsthSCs), believed to provide fresh cells for the ongoing renewal of the epithelium. Until now, these cells have been studied, relying on the expression of putative marker genes chosen to best represent the IsthSCs. Technical challenges and ambiguity with these markers have left scientists in the dark on the details of these cells’ stories.

Described in the current issue of Cell Stem Cell, a joint team lead by Dr. Bon-Kyoung Koo at IMBA and Prof Ben Simons at the University of Cambridge has applied a unique approach—the multi-color mouse confetti reporter system—to map the movements and trace the origins of cells in the mouse stomach directly. Stem and daughter cells are marked with four colors, and as they divide and migrate, they produce confetti-like images under the microscope. Using this technique, the scientists identified two distinct stem-cell populations in the upper and lower portions of stomach corpus glands. At the base of the glands are quiescent stem cells—not actively dividing, but like understudies in a play, they are ready to jump on stage and into action when called upon. The upper-mid sections of the glands (pit-isthmus-neck region) house a population of actively cycling cells with a starring role in tissue renewal. These results finally settle a controversy amongst scientists about the nature of stem cells in stomach corpus glands. Senior author

Bon-Kyoung Koo explains,”When we found the Troy+ reserve stem cell population in the stomach corpus gland in 2014, it caused a huge debate, as people had believed in the existence of stomach stem cells in the isthmus region. With this publication in Cell Stem Cell, we confirm that the gland actually hosts two types of stem cells—one in the base and the other in the isthmus. We are very happy to complete the long-standing riddle and be the first people to end the debate.”

The scientists also wanted to understand more about the molecular profiles of these two populations, and performed scRNA-seq analysis to capture a snapshot of gene expression in each cell type. The cells at the base—the understudies—expressed mostly genes required for their preparedness for action when called upon. The cells in the upper regions expressed a greater variety of genes, consistent with the idea that they are actively moving toward differentiation while on active cell division.

In addition to transcriptional signatures, the research team wanted to know more about the behavior of IsthSC clones, and so labeled the cells to monitor their vertical and lateral movement around the gland. They noted that vertical movement was much more rapid than movement to the sides. While this data fit the traditional neutral drift model (where populations are maintained in homeostasis because as some SCs are lost to differentiation, others divide to replace them with new undifferentiated SCs), it predicted a cell cycle time much slower than expected. In an attempt to refine this, the group looked to explain the delay in lateral expansion, suspecting that a physical barrier was causing a backup and forcing the SCs to stack vertically. Again, careful labeling of dividing cells showed that they stacked vertically against parietal cells, as though waiting like a stack of blocks behind a closed door. Parietal cells were confirmed to be the barrier when their temporary chemical removal allowed for faster lateral movement. With this in mind, they re-modeled the data as a “punctuated neutral drift”: the cells stack like blocks, waiting until the parietal cell is randomly lost, at which point they expand to the side in a burst of movement. When modeled this way, the data fits with a more appropriate cell cycle time and is consistent with what has been observed in human colon, suggesting that it may be a mechanism common to more glands.