Shannon LaDeau, a disease ecologist at the Cary Institute of Ecosystem Studies, explains, “Mosquitoes thrive in temperate cities and are a global threat to public health. As part of the Baltimore Ecosystem Study, we were interested in revealing how urban landscape features and social patterns influence mosquito biting behavior, to better inform targeted management.”

The study took place over two years in five rowhome neighborhoods in southwest Baltimore. Neighborhoods represented a socioeconomic range: below, at, or above the City’s median household income. Abandonment, trash removal, housing quality, landscaping, and pest control varied on a block-by-block basis. These factors are known to influence the success of mosquitoes, which need vegetation, water, shade, and blood to survive.

“Nature is all around us, including downtown Baltimore,” says Doug Levey, a National Science Foundation Long-Term Ecological Research program director. “In this case, urban landscapes provide excellent habitat for disease-carrying mosquitoes and rats. Understanding their habitat preferences and mosquito biting behavior can help protect us from disease.”

Most local mosquito species are not strong flyers. They fare poorly in dry, warm areas and are unlikely to fly over rowhomes. This study assumes that mosquitoes stay on the block where they’re born – in the safety of the cool, moist, vegetated area where they hatched.

From May to November in 2015 and 2016, mosquitoes were collected at two locations on each focal block using baited traps. In total, 20,551 adult female mosquitoes were captured and identified. Most (73.1%) were invasive Asian tiger mosquitoes (Aedes albopictus), but samples also included West Nile virus Culex vectors (24.1%) and Aedes j. japonicas (2.4%).

DNA was isolated from engorged mosquitoes to determine the source of their last meal. Host species included several mammalian (including human) and avian species. Invasive brown rats comprised 71.7% of all Ae. albopictus blood meals and were the second most common host in Culex samples, behind birds. Humans and cats each made up 13.3% of Aedes blood meals, while deer and dogs were bitten less frequently by all mosquito species. 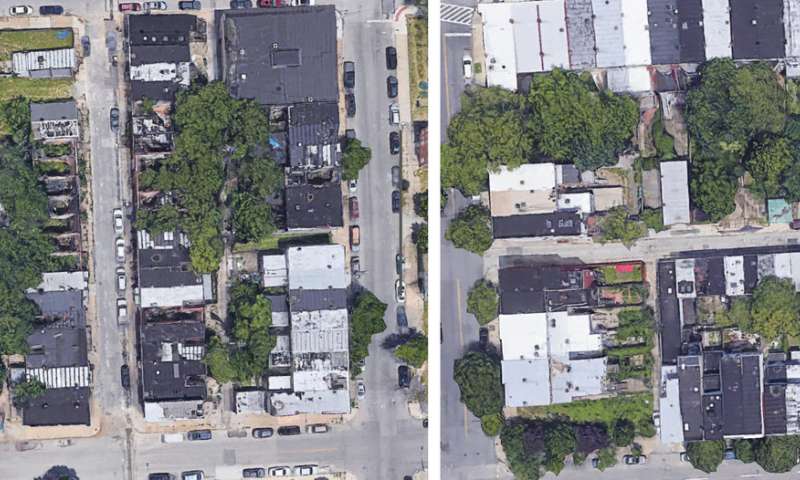 “These mosquitoes appear to bite what is easiest,” LaDeau explains. “Differences in biting behavior are less about host preference than what’s available and accessible. This is shaped by things like the abundance of neglected container habitats for juvenile mosquito development and how people choose to spend time outside.”

Heather Goodman is lead author on the study and an Associate Research Specialist at the Cary Institute. She notes, “In higher-income neighborhoods, people spend more time in their backyards where shade, vegetation, moisture, and mosquitoes are abundant. In lower-income neighborhoods, people spend more time in front of their homes where streets are paved and there is little shade or water-holding habitat for mosquitoes.”

These social patterns determine what hosts are available for mosquitoes to bite. Human behavior also drives the phenomenon of ‘rat blocks’ versus ‘cat blocks’.

In lower-income areas, residents turn to cats to attempt to help manage rat problems. This boosts feral cat populations. Where cats are abundant, rats are not. As a result, there are more cat blood meals in these areas. Cat blood meals were uncommon in higher income neighborhoods.

While mosquito density is highest in lower-income neighborhoods, people avoid them and alternative blood sources – mainly rats and, to a lesser extent, cats – are plentiful. There are fewer mosquitoes in higher-income neighborhoods, but people spend time in yards that are prime mosquito habitat and alternative blood meal sources are scarce, leading to a higher proportion of human biting.

Where does this leave median-income neighborhoods? “Our findings suggest that median-income areas are where people are most at risk of being bitten. These neighborhoods have high mosquito abundance and inconsistent infrastructure, yet abandonment is low. There are plenty of people for mosquitoes to bite and residents may be more likely to spend time in community gardens and shared green spaces, which makes them available to mosquitoes,” says LaDeau.

The study raises important questions about the role of rat populations in supporting urban mosquitos. Rats also carry pathogens like Seoul virus, Salmonella, Leptospira, Rickettsia, and Bartonella that can be passed to people through bites and contact with droppings.

“These scientists have demonstrated a strong link between social and natural systems,” says Betsy von Holle, an NSF Dynamics of Coupled Natural and Human Systems (CNH) program director. “The number of rats is influenced by the economic status of their human neighborhoods, and rat abundance may influence the transmission of diseases back to humans.”