Skip to content
HomeHealth ProblemsResearch shows if your eyes wrinkle when you smile or frown, you appear more sincere

Researchers at Western University have shown that our brains are pre-wired to perceive wrinkles around the eyes as conveying more intense and more sincere emotions. This eye-wrinkle feature, called the Duchenne marker, occurs across multiple facial expressions, including smiles, expressions associated with pain, and —as found by these researchers—expressions of sadness.

Using a method called visual rivalry, the researchers showed study participants photos of expressions with and without the Duchenne marker to study which of the expressions our brains perceive as more important. When different images are shown in each eye, the brain alternates between these two images, but will bring the image that is perceived as more relevant into perceptual awareness more often.

Principal investigator on the study, Dr. Julio Martinez-Trujillo, a professor at Western’s Schulich School of Medicine & Dentistry says visual rivalry is like a window into the unconscious, and demonstrates what our brains involuntarily see as more relevant or important. “The expressions involving the Duchenne marker were always dominant. So if the emotion is more intense, your brain actually prefers to bring it into perceptual awareness for longer time,” said Martinez-Trujillo.

The investigators also asked participants to rate the expressions on a scale for intensity and sincerity, and found that people systematically ranked the Duchenne smiles and Duchenne sad expressions as more sincere and more intense than the non-Duchenne expressions. 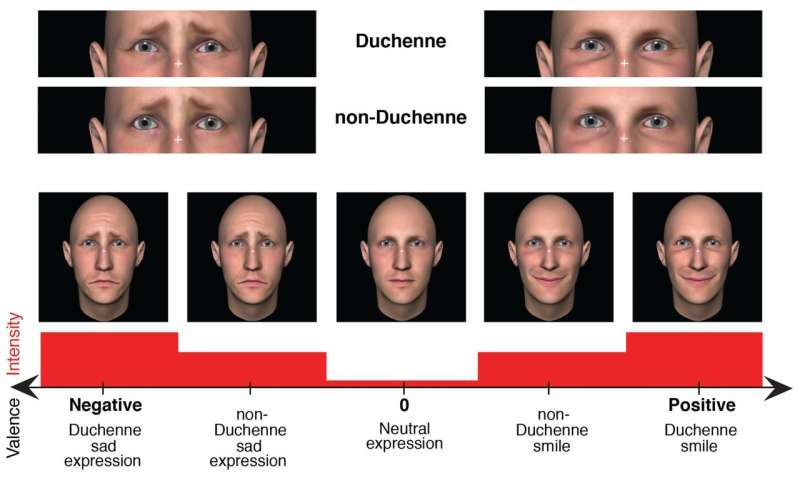 “These findings provide evidence of a potential universal language for reading emotions. In other words, a given facial action may have a single role across multiple facial expressions—especially if that facial action shapes your social interactions. For example, knowing if a stranger’s smile is genuine and whether that person can be trusted, warns you whether you should evade or not,” said Nour Malek, Ph.D., first author on the paper.

The study was conducted in collaboration with investigators the University of Miami and was published in the journal Emotion.

The authors point out that the results are a step toward understanding the more general questions of why facial expressions contain the specific facial actions they do, and how that contributes to our understanding of emotion.

“Since Darwin, scientists have wondered if there is a language of facial expression. This research suggests one key to this language is constriction of the eyes,” said Daniel Messinger, Ph.D., professor in the department of psychology at the University of Miami.

Tags:appear, eyes, frown, if, more, or, research, shows, sincere, smile, When, wrinkle, you, your
Related Posts