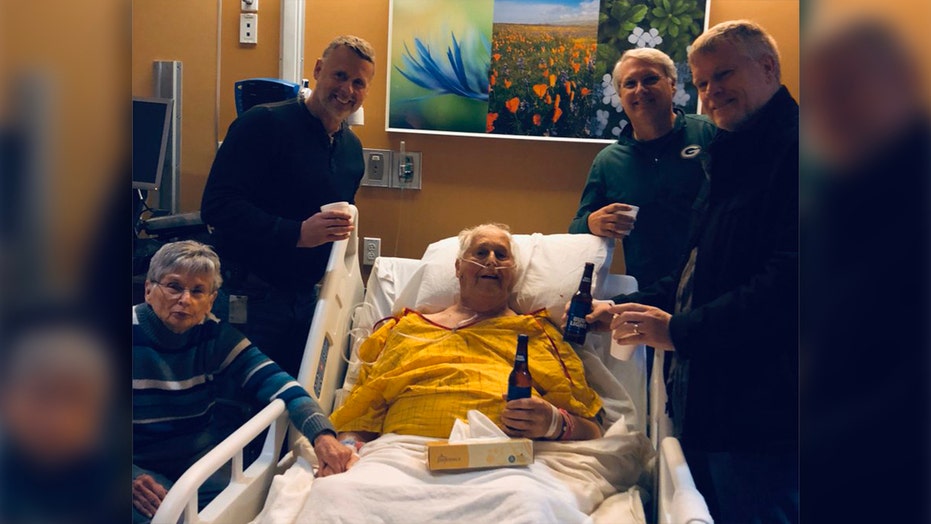 A man’s final wish to drink a beer with his sons before his death from cancer has pulled on the heartstrings of thousands after his grandson shared a photo of the group enjoying their brews on Twitter.

MAN STUCK GARLIC CLOVE IN EAR IN BID TO GET RID OF INFECTION, LEFT IT FOR 2 MONTHS, REPORT SAYS

“My grandfather passed away today,” Adam Schemm, himself a father of two, wrote on Nov. 20. “Last night all he wanted to do was have one last beer with his sons.”

The photo shows Schemm’s grandfather smiling in his hospital bed holding a Bud Light while surrounded by his three sons, all holding cups of their own, as well as his wife, who is holding his hand.

The touching moment quickly went viral on Twitter, reaching over 320,000, and thousands were moved to comment. Many users even took the time to share their own final moments with loved ones, like one man who helped his grandpa smoke a cigar and drink a beer days before he died.

Another user shared a photo from May where he and his dad enjoyed a cold beer and watched the Yankee game from the man’s hospital room.

Schemm later told TODAY Parents that his 87-year-old grandfather had stage 4 colon cancer and that drinking beer together was one of the last moments family members had with him.

“That moment meant so much to my grandfather,” he told the news outlet. “You can tell they all know what’s going to happen, and they just want to enjoy being together. They all have this look of closure.”