Surgeons in India have removed a gigantic tumour weighing 40lbs (18.1kg) from a woman’s ovary.

Kavita Kalam, 38, went to hospital with severe stomach pain and told doctors she was struggling to breathe.

Medics conducted an array of tests and found she had an ovarian tumour that was 41.7inches (106cm) in circumference.

Doctors reportedly warned the tumour could have ‘ruptured her abdomen’, had it not been taken out when it was.

Ms Kalam was treated at Acharya Vinoba Bhave Hospital in Wardha, a city that sits south west of Nagpur in the heart of India.

She was diagnosed with a serous cystadenoma – a non-cancerous tumour filled with a clear watery liquid.

Dr Arpita Jaiswal Singam, one of the medics who treated Ms Kalam, reportedly said: ‘This is the biggest cyst I have operated on.

‘It was so large it took up 95 per cent of the patient’s abdomen with an abdominal circumference of 106cm.’ 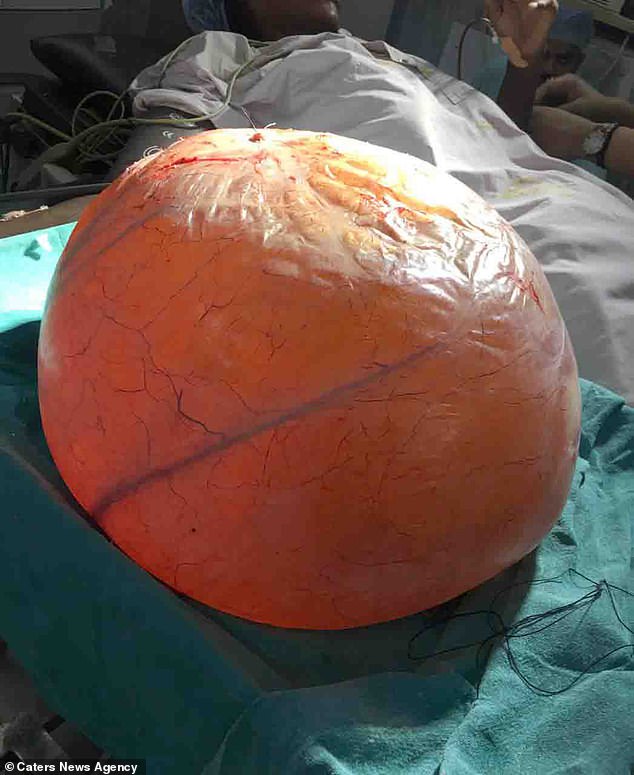 Surgeons in India have removed a gigantic tumour weighing 40lbs (18kg) from the ovary of a woman called Kavita Kalam, 38 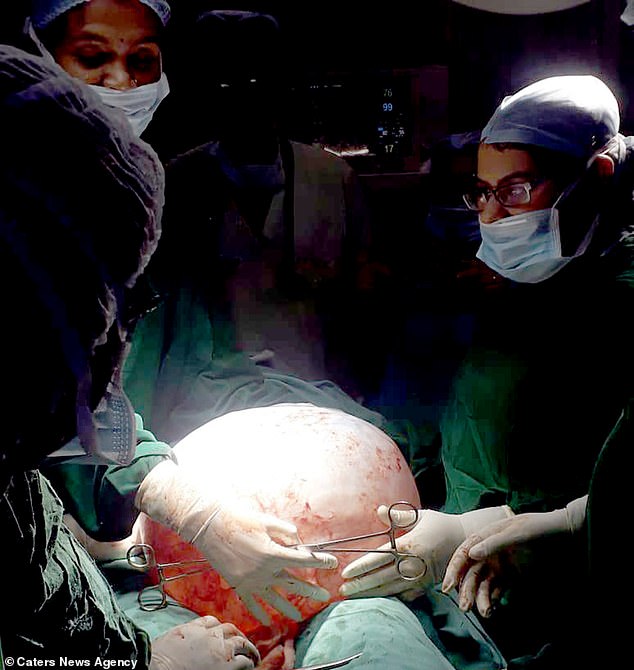 Medics said the tumour was 41.7inches (106cm) in circumference. Pictured on removal

Ms Kalam, an impoverished widow, was in immense pain for seven months before they surgery. She could not afford a medical treatment.

Villagers collected the equivalent of £55 in order for her to visit the hospital because she was struggling to breathe.

In previous studies, the definition of a large or giant ovarian cyst is one which measures 10cm or more in diameter.

There are a large range of ovarian tumours depending on where they start.

An ovarian serous cystadenoma is the most common form of a surface epithelial-stromal ovarian tumour, which account for around 65 per cent of all ovarian tumours.

They are commonly seen during the reproductive period and half of them occur before the age of 40 years.

Huge size ovarian serous cystadenoma is rare. In the literature, a few cases of giant ovarian cysts have been mentioned randomly, mostly in elderly patients.

Surgery is essential, but there are various complications.

At the hospital, the doctors performed a battery of tests including CT scan on Ms Kalam, a mother to a seven-year-old son.

They found the ovarian tumour that was causing her abdomen to grow bigger than what doctors described as a pregnancy bump.

The doctors said the surgery was challenging as the mass was huge and removal without spilling the fluid contents in the abdominal cavity required expertise.

Dr Abhishek Kothule, a gynaecologist, said: ‘The patient was not fit for general anaesthesia.’ Instead, pain-numbing drugs were injected into Ms Kalam’s spine.

She was also given an epidural analgesia, usually given before childbirth to numb sensation in the lower half of the body.

Ms Kalam’s ovary had reportedly merged into the mass and her fallopian tube had thinned out.

During surgery, there was a risk she would slip into hypotensive shock, which results from significant and sudden blood or fluid losses within the body. 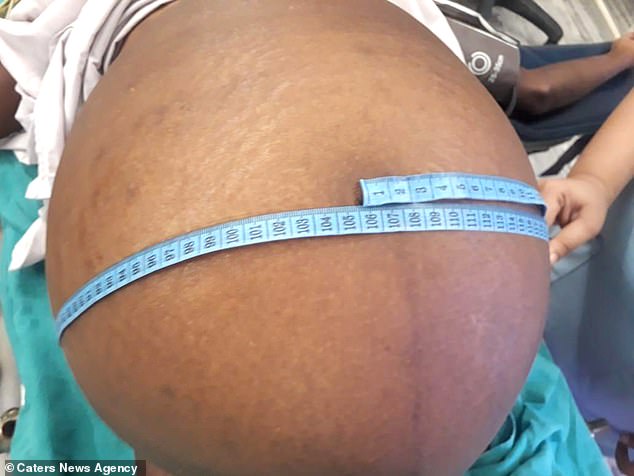 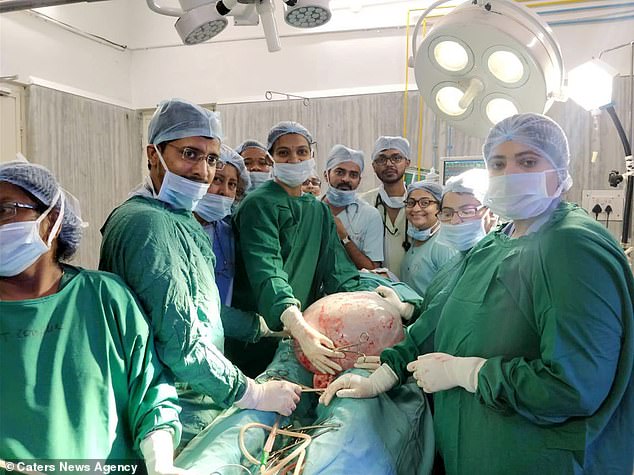 The life-threatening condition can cause organs to fail.

The doctors took out the tumour by making an incision of 2cm above the pubic bone to the belly button.

Dr Abhishek said: ‘It was difficult to remove such large cyst through limited space.’

‘Due to sudden decompression of tumour, the patient could have land up in hypotensive shock.

‘If the tumour was not removed on right time, it could have ruptured her abdomen.’

Ms Kalam weighed 125lbs (56.6kg) before the surgery and her weight came down to 82lbs (37kg) after the cyst was removed. She is stable now and eating again.

WHAT ARE THE SYMPTOMS OF OVARIAN CANCER?

The symptoms of ovarian cancer can be difficult to recognise, particularly early on.

They’re often the same as symptoms of less serious conditions, such as irritable bowel syndrome (IBS) or pre-menstrual syndrome (PMS).

The most common symptoms of ovarian cancer are:

Other symptoms can include:

When to see your GP

See your GP if:

It’s unlikely you have cancer, but it’s best to check. Your GP can do some simple tests.