How do you remove a magnet stuck in a 9-year-old girl’s lung? Doctors settled on the novel method of using a stronger magnet to slide it out!

When doctors in an Indian hospital were presented with a nine year-old girl with a magnet stuck in her lung they struggled to remove it with surgery.

After considering how best to dislodge the small piece of metal, they settled on a clever idea – they would use another magnet.

The girl had swallowed the one-inch magnet by accident while playing with her sister and was having trouble breathing.

A surgeon at a hospital in Mangalore – about 600 miles south of Mumbai – could not grip the smooth magnet with tools when he tried to pull it out.

Instead, in an unusual procedure the surgeon moved another, stronger magnet across the outside of the girl’s body to shift it out of the lung.

The attracting force of the magnets allowed him to slide the blockage along her windpipe and into her mouth, from where he was easily able to remove it. 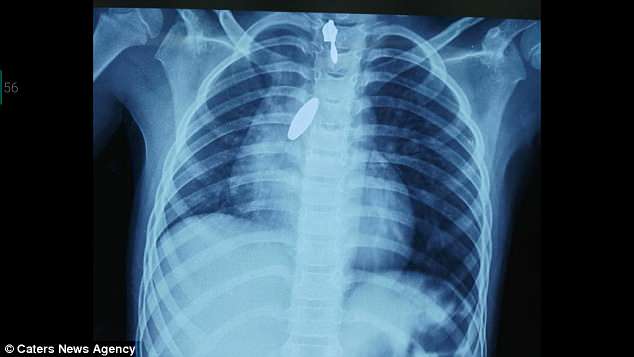 An emergency x-ray revealed the inch-long magnet had moved to the girl’s lung by the time she made it to hospital, meaning it would be tricky to remove

A paediatric surgeon at the KMC Hospital in Mangalore said using another magnet made it ‘easy’ to remove the choking hazard.

The girl was taken to the hospital where they found she was in ‘mild respiratory distress’.

She was quickly given an x-ray which showed the magnet had already travelled to her right lung, making it difficult to remove safely.

The magnet was too smooth to remove

She was then taken into an operating theatre where surgeons planned to remove the magnet with a bronchoscope – a fibre-optic cable fed down her windpipe to check for bleeding or damage.

However, the magnet’s smooth surface made it tricky to hold on to. 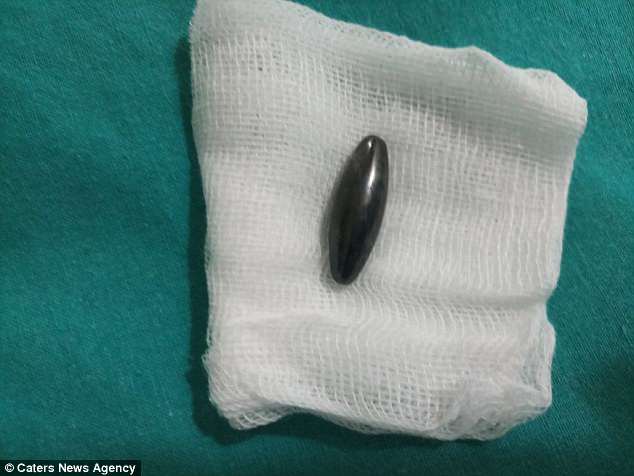 The nine-year old swallowed the magnet by accident while playing with her sister, and was taken to hospital because she was struggling to breathe properly

Paediatric surgeon, Dr Jayateertha Joshi, and anaesthetist, Dr Sunil, needed to find a way to get the magnet out without damaging the girl’s trachea – her windpipe – or blocking her airways.

Medics used a bigger magnet to slide the metal out

The doctors then devised an extraordinary plan to use a stronger magnet to move the inch-long piece of metal along the girl’s windpipe.

WHAT SHOULD YOU DO IF SOMEONE IS CHOKING?

The NHS recommends doing the following if an adult or child – but not a baby – is choking.

If they can still breathe and the airway is only partly blocked, encourage them to keep coughing and spit out the object.

If they are severely choking they may become unconscious if the blockage is not removed quickly.

To help you should lean the person slightly forward, stand beside and slightly behind them, and slap them on the back up to five times with the heel of your hand.

If this does not clear the blockage you should perform the Heimlich manoeuvre – stand directly behind them and clasp your hands together, with a fist just above their belly button.

Then pull your hands sharply inwards and upwards into their abdomen.

Repeat this up to five times – if it does not work phone 999.

They were able to slide the smooth metal object towards her mouth, while keeping the bronchoscope in place, where they could take it out.

The unusual procedure was successful because the magnetic pull from the bigger magnet caused the piece of metal inside the girl’s body to follow it as doctors moved it along the outside of her body.

Dr Jayateertha said: ‘While removing such large objects it may obstruct the main windpipe or trachea, leading to difficulty breathing when the child is under anaesthetic.

‘In this unique situation, doctors made plans to obtain a stronger magnet and move on the surface while keeping the bronchoscope in the windpipe to see the object moving up to the entrance of the windpipe.

‘When it reached the top of the windpipe removal became easy.’

Objects getting stuck in children’s throats can pose a serious choking hazard and last year a mother shared a shocking photo on social media, showing a small grape lodged in a child’s throat.

Brisbane-based blogger Angela Henderson of Finlee and Me, shared the picture on Facebook as a warning to parents that choking is always a danger. 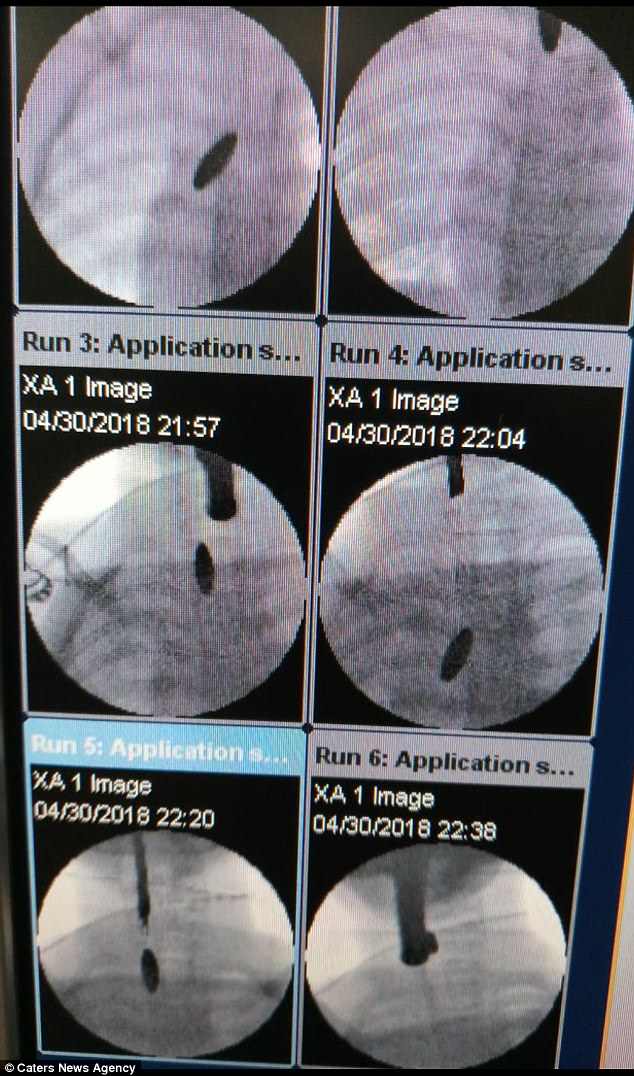 X-ray images show the magnet, which was removed from the girl’s lung and windpipe by sliding a stronger magnet along the outside of her body

The x-ray picture showed a grape stuck in the airway of a five-year-old boy.

Ms Henderson said: ‘This sweet soul had to be operated on, under general anaesthetic to remove the grape.

‘He is very lucky that part of his airway was open or else this could have ended badly.

‘Please be mindful that not all kids chew their food, are in a rush at school to get in the playground etc,’ she continued.

‘Please be careful. And when in doubt just cut the damn grapes or baby tomatoes.’