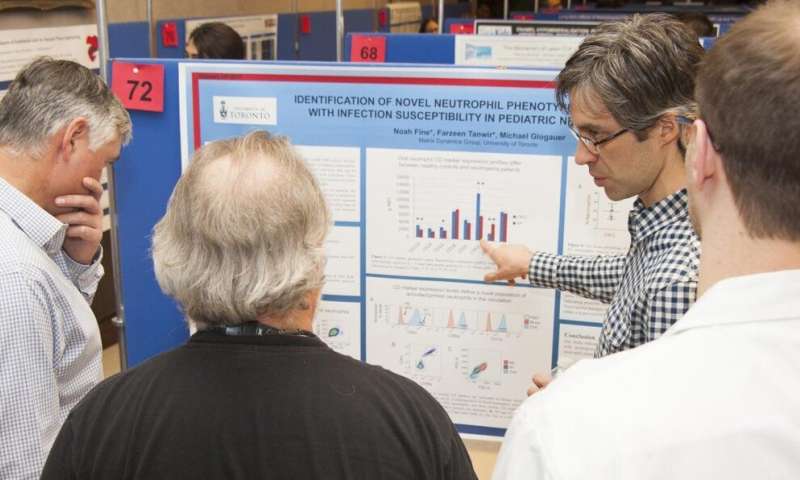 A unique discovery about the nature of neutrophils—the most numerous white blood cells in the body—may lead to new models for diagnosing and tracking inflammatory diseases such as cancer and osteoarthritis.

The “first responders” of the body, neutrophils are a class of leukocyte immune cell in the “innate” immune system, which deals with acute infections. Billions of neutrophils are born in the bone’s marrow each day to protect the body and attack microbial invaders.

“The general consensus in the past was that there is one kind of neutrophil in circulation in healthy people,” says Michael Glogauer, professor at the Faculty of Dentistry and acting chief dentist at the Princess Margaret Cancer Centre.

“We found two distinct neutrophil states in blood, and these populations vary depending on the health of patient and if there are acute or chronic infections,” added Glogauer, who is one of the authors of the study, which appeared in Blood Advances this month.

The University of Toronto team discovered this unique subset of immune cells after developing a novel method of preserving and analyzing neutrophils in blood, overcoming a longstanding difficulty in how to study these short-lived and easily activated immune cells.

The team then tested blood samples from both mice with acute infections and humans with chronic gingivitis, tracking both the prime and resting neutrophils. When an acute infection flares up, the primed warrior cells quickly leave the blood stream and enter the tissues.

In both mouse and human models with acute inflammation, the primed cells disappear from the bloodstream and enter inflamed tissues within 15 minutes. Within one to three hours, the remaining resting state neutrophils also become activated, and follow the initial team into the tissues.

“The current paradigm is that neutrophils are circulating in the blood, just waiting for something to happen, and then they are immediately recruited into tissue and fight infection,” says Noah Fine, a postdoctoral fellow at the University of Toronto Faculty of Dentistry and first author of the study.

“That’s still true,” adds Fine, “but we’re now looking at a model with a fine- tuned mechanism. In this model, the neutrophils aren’t constantly on a knife’s edge, waiting to react to an infection—that could lead to overexuberant neutrophil responses in healthy individuals.”

The discovery may one day aid in disease detection and monitoring. If the percentage of primed neutrophils in the blood is constant in a healthy state, hovering at around 10 per cent, then it follows that “we can track the state of the activation of the innate immune system where the expectation would be elevated levels of this primed population,” says Glogauer.

Blood samples from those who are experiencing inflammatory disease attacks, for instance, can be looked at for the number of primed neutrophils as a barometer of the activation state of the immune system—telling medical professionals exactly how acute an infection is across a wide range of inflammatory diseases such as cancer, gout, arthritis and diabetes.

Currently, the team is testing neutrophil populations both just before and after cardiovascular surgery, as well as patients with rheumatoid arthritis and periodontitis.

The discovery may also lead to new paradigms for health research.

“The fact that we see this population in mice and that it appears to behave similarly in humans is very exciting,” says Fine, who points out that mice and other animal models used in health research sometimes have limitations based on their physiological differences to humans.