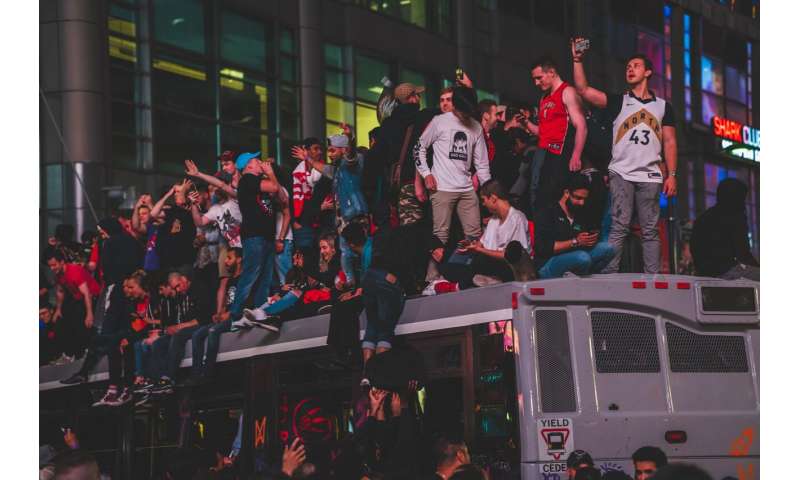 Researchers at Beijing Normal university and Leiden University have recently carried out a study investigating patterns in neural activity that could be observed in humans during intergroup conflicts (i.e., conflicts between different groups of individuals). Their paper, published in Nature Neuroscience, draws inspiration from “The crowd: A study of the popular mind,” a book by Gustave Le Bon that describes the unusual and sometimes extreme ways in which individuals can behave when they become part of a crowd.

“To understand the ‘group mind’ and intergroup conflict, especially the underlying neural mechanisms, we combined functional near-infrared spectroscopy (fNIRS) hyperscanning and behavioral paradigms from previous studies on intergroup conflict carried out by my group and a group led by our collaborator Carsten De Dreu,” Yina Ma, one of the researchers who carried out the study, told Medical Xpress.

The recent study carried out by Ma and her colleagues was based on past observations suggesting that members of a group who are not genetically related can sometimes behave cooperatively, yet in other cases, groups of individuals who are generally fairly reasonable can behave in a hostile manner towards other groups. Two examples of these intergroup conflicts are political debates and fights between football fans. In some cases, these polarized conflicts can seriously deteriorate relationships between groups, sometimes with highly destructive and undesirable consequences.

“While social scientists (Le Bon, 1895; Durkheim, 1915) and economists (Hayek, 1945; Smith, 1988) have long investigated the origins and dynamics involved in such ‘madding crowds’, surprisingly little is known about the neurobiological underpinnings and the neural markers for group cooperation and intergroup conflict,” Ma said. “In our study, we used functional near-infrared spectroscopy (fNIRS) to track individual brain activity and, in particular, neural synchronization among group members in relation to behavioral hostility during intergroup conflict.”

The key objectives of the paper by Ma and her colleagues were to investigate whether the neural activity of different group members was synchronized during intergroup conflicts and, if it was, how this synchronization was modulated by conditions that are known to strengthen a single person’s willingness to contribute to their group’s welfare and attack rival groups. The researchers hoped that their study would offer an explanation for why groups of people can sometimes turn into ‘madding crowds’ and take serious risks to fight against rivals.

“We used behavioral paradigms, similar to those used in previous work on intergroup conflict by my group and De Dreu’s group,” Ma said. “We organized six-person, real-time, intergroup attacker-defender competitions, which are real-interactive intergroup contests that have been proven to induce intergroup hostility.”

Ma and her colleagues arranged participants into groups strategically based on their color preferences and other features in order to examine whether similar features or tastes strengthened people’s group identity. This also allowed them to investigate whether a stronger group identity had an impact on intergroup conflict dynamics and on the neural synchronization between different participants in the same group.

The researchers collected imaging data from those who took part in their intergroup contests and then analyzed this data, looking for patterns in both behavior and neural activity shared by group members while a conflict was taking place. To unveil shared behavioral patterns, the researchers used methods similar to those employed in their previous work, calculating the similarities and correlations between different group members’ decisions.

This allowed them to index the coordination in group members’ decisions and better understand how this coordination contributed to the escalation of a conflict. To analyze neural activity, on the other hand, Ma and her colleagues examined the neural synchronization between different group members and its role in group decision making.

The results significantly enhance our understanding of what is known as the ‘group mind’, unveiling some of the neural mechanisms underpinning within-group cooperative behaviors and intergroup conflicts. Ultimately, the work provides a possible neural account of how individuals inside a group become de-individualized and impulsive, exhibiting a collective hostility toward outsiders.

“Our study is among the first to investigate the synchronization of neural activity within groups in relation to individual and group-level decision-making,” Ma said.

Ma and her colleagues were among the first to uncover brain-to-brain coupling at the level of larger groups, and crucially, to show that this neural synchronization predicts collective decision making. Their work could open up new horizons for future studies exploring how social interactions can shape brain activity and how these socially shaped neural patterns can in turn drive collective actions.

“We will now continue exploring lines of research related to intergroup interactions,” Ma said. “This his work reveals how individuals in already established groups interact and make group decisions. We also collected new data regarding the formation of group, to reveal the neural mechanism of how single individuals form a group. In our next studies, we are interested in exploring the influence of group structure (such as peer group, leader-follower etc.) on intergroup interaction.”