Researchers in Germany have discovered that colon cancers are often resistant to existing drug treatments because they are composed of two different cell types that can replace each other when one cell type is killed. The study, which will be published May 16 in the Journal of Experimental Medicine, suggests that combination therapies targeting both cell types at once may be more effective at treating colorectal cancer, the third highest cause of cancer-related death in the United States.

One potential alternative is to target the NOTCH signaling pathway, which is also thought to drive colon cancer progression even though, in bladder cancer, it suppresses MAPK signaling. But initial trials of NOTCH pathway inhibit ors have so far yielded disappointing results.

Horst and colleagues examined over 300 patient samples and found that the NOTCH pathway wasn’t activated in all colon cancer cells. Cells in the middle of tumors showed signs of active NOTCH signaling but reduced MAPK activity. This population of cells appeared to be highly proliferative. Cells at the edges of colon cancers, in contrast, showed high levels of MAPK signaling but little NOTCH pathway activity. This population of cells was less proliferative but appeared to be undergoing the initial stages of metastasis, in which colon cancer cells invade and spread to other tissues. 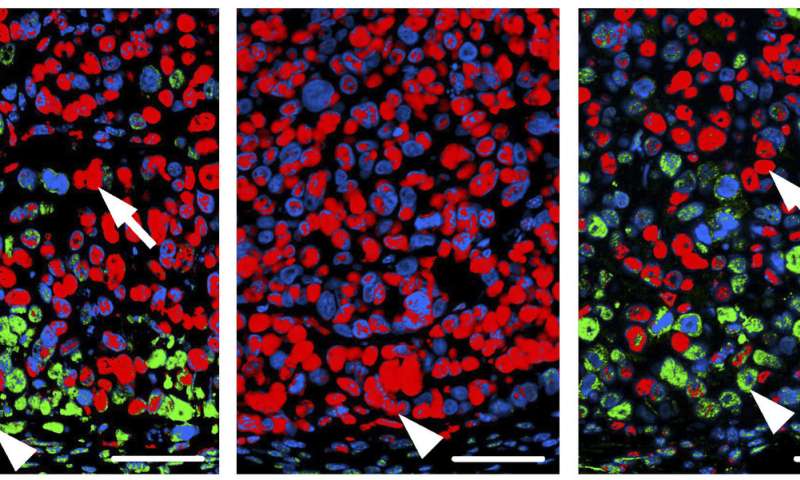 “This suggests that colon cancers may evade targeted treatment against MAPK or NOTCH signaling by a reversible shift in the predominating pathway activity,” says Horst. “However, when combining both therapies to target both cell populations, we found strong repressive effects on tumor cell proliferation and increased cell death, resulting in slower tumor growth and prolonged survival times compared to either treatment alone.”

Horst and colleagues note that targeting the NOTCH pathway alone may even be detrimental to colon cancer patients, if it results in an increased number of MAPK-active cells poised to undergo metastasis.