When the Ebola virus struck West Africa in 2014, it resisted early attempts at control. It took more than two years to overcome, claiming more than 11,000 lives. Volunteers from the West who were infected were flown home and treated with experimental therapies, while those on the ground in Sierra Leone, Liberia and Guinea were treated in camps set up to deal with the disease.

By the time the epidemic was over, several experimental treatments had completed emergency testing. Most were disappointing, but a late vaccine trial proved to be successful. Could this success be useful in containing the latest outbreak in the Democratic Republic of the Congo (DRC)?

There have been regular outbreaks of Ebola since the virus was discovered close to the Ebola river in 1976. It is a zoonotic infection, that is to say, it circulates naturally in animals – most probably the fruit bat – and occasionally finds its way to humans through animal handling or meat consumption. When it does, it causes hemorrhagic fever and bleeding from the nose and mouth, and it has a high mortality rate.

As is common with these types of viruses, while the infection in humans is brutal, it transmits poorly – so it tends not to spread very rapidly. Ebola will never be a new influenza. That’s not the way the virus works. But close contact with an infected person during nursing or at their burial gives the virus a chance to enter a new host, so local spread is possible.

While the patient is still mobile they can also move away from the original site of infection and increase the risk of spreading the virus. This seems to have happened in the outbreak in Équateur province, which ended in July. The original cases were in rural parts of the province, but later cases occurred in Mbandaka, a city on the Congo River.

Even poor transmission can be overcome in a crowded population, bringing with it the risk of a major outbreak from a few initial cases. These concerns will be uppermost in health officials’ minds now as the city of Beni is close to the new cases in North Kivu province in the DRC.

In the May-June outbreak, the vaccine developed during the West Africa epidemic was administered as part of the intervention regime. The same strategy is now in play – although with difficulty, as the conflict in North Kivu is limiting access. 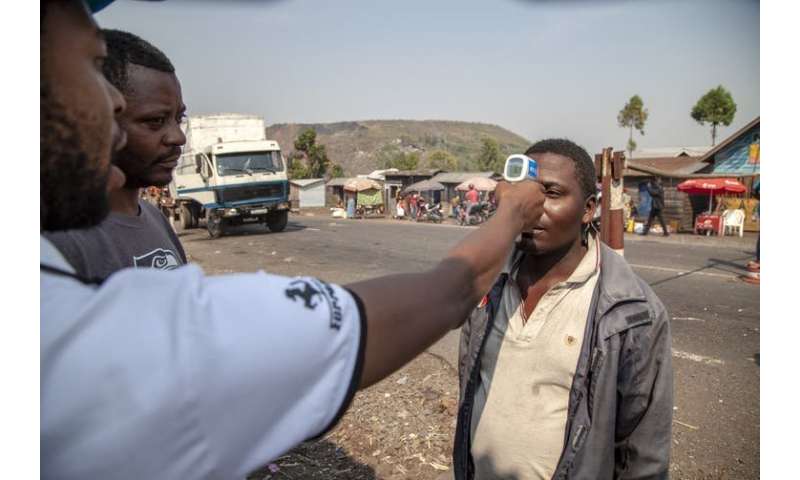 The vaccine, which the earlier trials showed was completely safe, is offered to healthcare workers and to contacts of any primary cases, then, in turn, to their contacts – making, in effect, ripple-like rings of immunity around the first identified case of Ebola virus disease in the current outbreak.

Ebola can’t spread far, and if the only people it can come into contact with are already immune, then it has nowhere to go and will fizzle out. The traditional methods of control did this by physical isolation, vaccination does it by immunological isolation.

Those in line for the vaccine also get the reassurance that something is being done – “wait and see” becomes “treat and see”. And, assuming the vaccine can be delivered to the target population, this outbreak (the tenth in the DRC), should be brought under control relatively quickly.

New Ebola outbreaks will always occur, and short of vaccinating all the people at risk – which is impractical – nothing can prevent them. But the situation has been improved by the findings that emerged from the 2014 West Africa epidemic.

A combination of tracing people who have come into contact with infected people – which was always crucial for controlling these outbreaks – with the now available efficacious vaccine, means the inevitable need not become unstoppable. People on the ground still need to report incidents and be willing to embrace the offered treatments, but there is no reason that a situation like the 2014 outbreak in Guinea, Liberia and Sierra Leone need ever happen again.