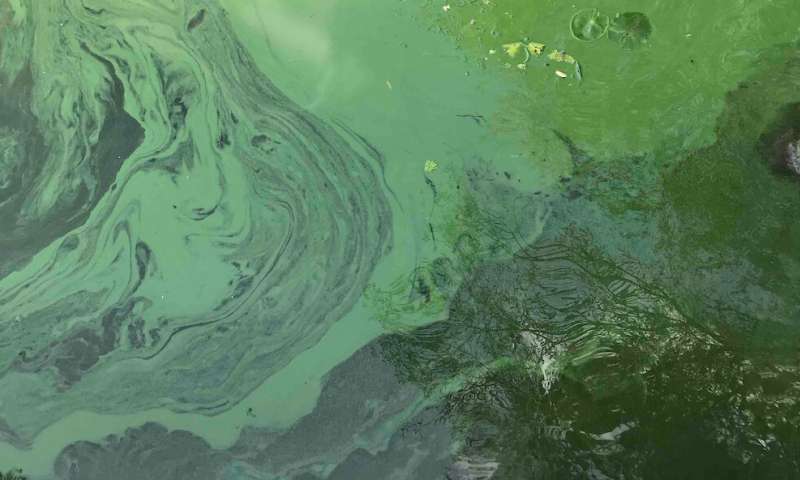 Toxic algal blooms can be devastating to natural waterways, robbing them of oxygen, creating dead zones, and sickening people and animals. However, they may also be beneficial, potentially helping combat the progression of neurodegenerative disease, a URI College of Pharmacy study is showing.

Assistant Professor of Biomedical and Pharmaceutical Sciences Matthew Bertin is teaming up with biotech firm Biosortia Pharmaceuticals Inc. to study the chemicals produced by algal blooms, which may hold the key to reducing neuroinflammation, a primary reason diseases such as Alzheimer’s and Parkinson’s progress. The inflammation of the central nervous system and nervous tissue is also key in the initiation and persistence of neuropathic pain.

URI College of Pharmacy Assistant Professor Matthew Bertin is examining toxic algal blooms, which may hold the key to reducing neuroinflammation, treating such diseases as Parkinson’s and Alzheimer’s.

Bertin’s laboratory has found several promising anti-inflammatory compounds from blooms of the marine cyanobacterium Trichodesmium. Bertin, who believes many of the compounds that are considered toxic can be leveraged in the arena of human health, seeks to determine which chemicals can reduce neuroinflammation, and purify active compounds to further access their therapeutic potential.

“I’ve always been interested in chemicals produced by harmful algal blooms, specifically as chemotherapeutics,” Bertin said. “But beyond these cyanotoxins, I believe there are numerous chemicals available in the microbial world that can be useful in treating diseases ranging from diabetes to Alzheimer’s. These previously inaccessible compounds may provide the next blockbuster treatment for neurodegenerative disease.”

Biosortia Pharmaceuticals has also been working with cyanobacterial blooms and the complex microbial communities that comprise them, typically in freshwater systems. The Biosortia team has access to unprecedented quantities of microbial biomass due to their harvesting strategies, and it is able to “mine out” minor metabolites, creating libraries of chemical compounds that would have been previously unreachable for chemists and microbiologists. It is from these libraries that Bertin and Biosortia are pulling chemicals to study.

“Biosortia is very excited to be working with Dr. Bertin and the team at the University of Rhode Island,” said Ross Youngs, founder and chief executive officer. “The aquatic microbiome is a diverse, evolutionary precursor and contributor to the human microbiome, creating the only deeply obtainable human surrogate microbiome. Biosortia’s distinct capability to access and demonstrate the extraordinary potential of aquatic microbiomes, small molecules/metabolites and their pathways as the foundation of life sciences research, can be a game changer in terms of therapeutic discovery. The synergy of Biosortia’s ability to access this next frontier of metabolomic chemistry with the Bertin Laboratory can have a far-reaching effect on developing chemotherapeutics.”