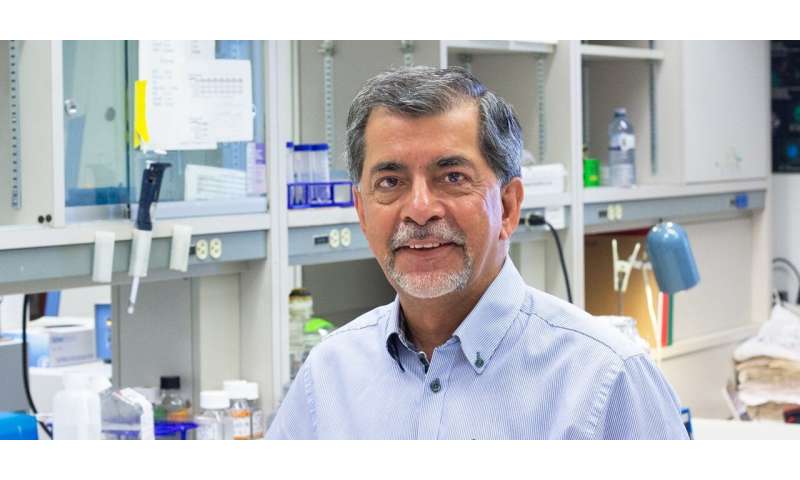 Two years after discovering a way to neutralize a rogue protein linked to Alzheimer’s disease, University of Alberta Distinguished University Professor and neurologist Jack Jhamandas has found a new piece of the Alzheimer’s puzzle, bringing him closer to a treatment for the disease.

In a study published in Scientific Reports, Jhamandas and his team found two short peptides, or strings of amino acids, that when injected into mice with Alzheimer’s disease daily for five weeks, significantly improved the mice’s memory. The treatment also reduced some of the harmful physical changes in the brain that are associated with the disease.

“In the mice that received the drugs, we found less amyloid plaque buildup and a reduction in brain inflammation,” said Jhamandas, who is also a member of the Neuroscience and Mental Health Institute.

“So this was very interesting and exciting because it showed us that not only was memory being improved in the mice, but signs of brain pathology in Alzheimer’s disease were also greatly improved. That was a bit of a surprise for us.”

This discovery builds on previous findings of a compound called AC253 that can block the toxic effects of a protein called amyloid beta, which is believed to be a major contributor to Alzheimer’s because it is often found in large quantities in the brains of patients with the disease. AC253 blocks amyloid beta from attaching to certain receptors in brain cells—a process Jhamandas likens to plugging a keyhole.

However, while AC253 was shown to prevent a buildup of amyloid beta, it isn’t very effective at reaching the brain and is quickly metabolized in the bloodstream. As a result, treatment using AC253 requires large amounts of the compound to be effective, which is impractical and increases the chances of the body developing an immune reaction to treatment. Transforming AC253 from an injectable drug into a pill would address the metabolism issues and increase efficacy, but AC253 was too complex to be able to make an effective oral drug.

Jhamandas’ solution was to chop AC253 into pieces to see whether he could create smaller peptide strings that blocked amyloid beta in the same way AC253 did. Through a series of tests using mice genetically modified to carry Alzheimer’s disease, Jhamandas’ team found two shorter pieces of AC253 that replicated the preventative and restorative abilities of the larger peptide.

With the short peptides identified, Jhamandas and his team, which includes renowned virologists Lorne Tyrell and Michael Houghton, used a process of computer modeling and artificial intelligence to discover a small-molecule drug—similar to medications used to treat high blood pressure or cholesterol—it’s now developing.

The team is focused on manufacturing an optimized and oral version of the drug so human clinical trials can begin, said Jhamandas, who added small-molecule drugs are preferable for treatments, particularly for drug companies, because they are cheaper to make, can be taken orally and can more easily reach the brain through the blood, said Jhamandas.

While Jhamandas is optimistic about the potential of his new drug to change the way Alzheimer’s is managed, he is quick to point out the years of research he and other researchers have done to get to this point.

“This has been 15, 20 years of painstaking and incremental work,” he said. “And it’s like building a house: you put one brick down, then you put another brick on top of that, and pretty soon you have a foundation and then you have a house.