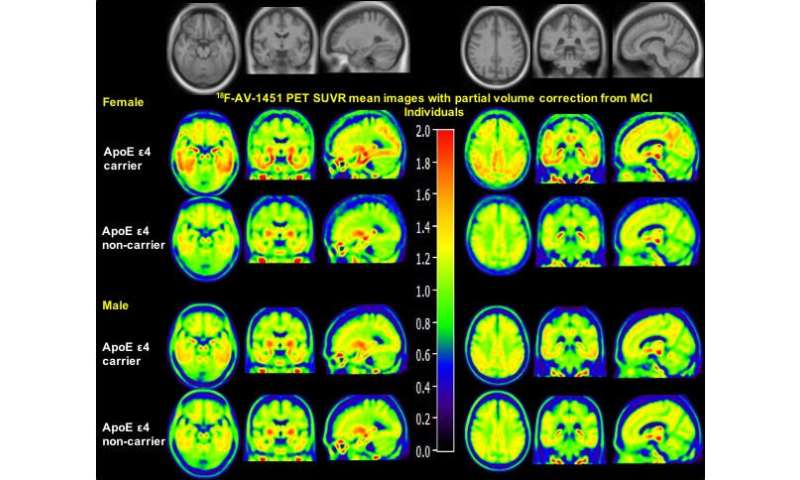 The strongest genetic risk factor for Alzheimer’s disease is the apolipoprotein E type 4 allele (ApoE ε4). Research presented by Manish Paranjpe at the 2019 Annual Meeting of the Society of Nuclear Medicine and Molecular Imaging (SNMMI) used positron emission tomography (PET) to show that women who are ApoE ε4 carriers and already experiencing mild cognitive impairment are more susceptible than men to tau accumulation in the brain.

“Sex plays an important role in Alzheimer’s disease risk, with females having a higher lifetime risk of developing the disease and an increased vulnerability to genetic risk factors,” points out Yun Zhou, who led the project at the Mallinckrodt Institute of Radiology, Washington University in St. Louis School of Medicine. He explains, “This is the first study to demonstrate that sex modulates the effect of ApoE ε4 on brain tau depositing, measured using 18F-AV-1451-PET imaging, in the entorhinal cortex, amygdala, parahippocampal gyrus, and posterior cingulate of the brains of patients with mild cognitive impairment (MCI). Strikingly, females experience greater ApoE ε4-associated increases in brain tau deposition in these regions compared to their male counterparts.”

In addition to finding women with the ApoE ε4 mutation more susceptible than men to tau accumulation, Zhou notes: “Our study also confirmed that sex does not modulate the ApoE ε4-associated tau deposition in the brains of cognitively normal elderly individuals, and it extends our understanding of how sex modulates the ApoE ε4 effect on tau deposition in the brains of individuals at the early stage of Alzheimer’s disease.”