Boy, five, who can’t walk, talk or sit is the ‘only person in the world’ to suffer from a crippling condition so rare it doesn’t have a name

A five-year-old boy is the ‘only person in the world’ to suffer from a disease that is so rare it does not even have a name.

Ollie Lloyd has a chromosomal condition that has left him unable to walk, talk, sit or lift his head.

The youngster is also blind, has significant hearing loss in both ears and can endure up to 100 seizures a day. Doctors have been unable to give him a prognosis.

Ollie’s mother Louise Lloyd, 32, is his full-time carer, while his father Steve Sadecki, 34, was forced to cut back on his job at a supermarket when he kept needing unpaid leave.

The couple, of Barrow-in-Furness, Cumbria, have received nearly £4,500 ($5,431) in donations from friends and strangers to help them make ends meet.

With Ollie deteriorating as he gets older, the pair are hoping to fundraise an extra £10,000 ($12,071) to help them care for their son and pay their living expenses. 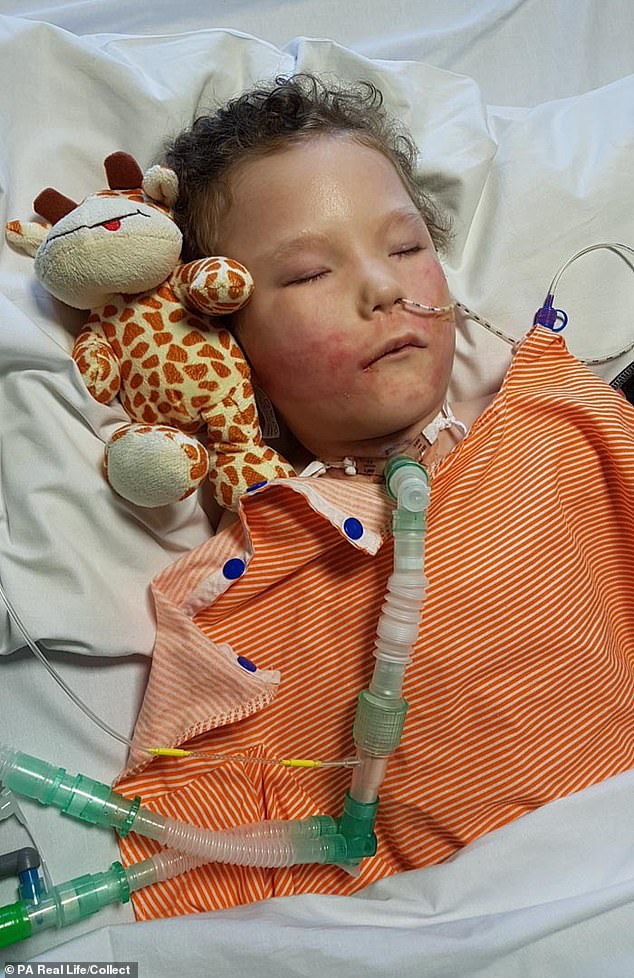 Ollie Lloyd (pictured) is the ‘only person in the world’ to suffer from a disease that is so rare it does not even have a name. The chromosomal condition that has left him unable to walk, talk, sit or lift his head. He is pictured in hospital after having a tracheotomy fitted in February 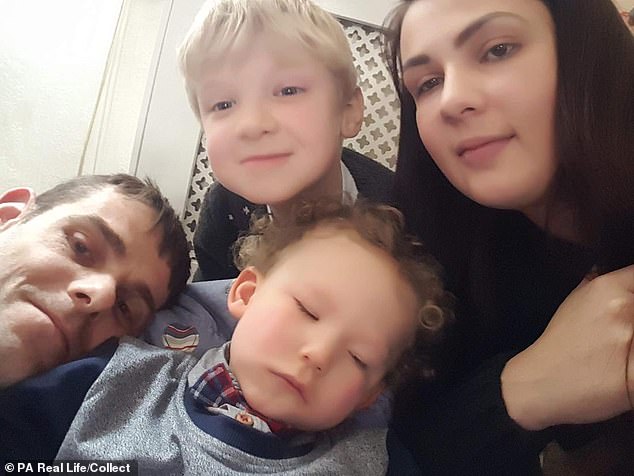 Ollie’s mother Louise Lloyd, 32, is his full-time carer, while his father Steve Sadecki, 34, was forced to cut back on his job at a supermarket when he kept needing unpaid leave. The couple are pictured with Ollie, five, and their 10-year-old son Harvey, who is healthy

Speaking of his son’s condition, Mr Sadecki said: ‘We’ve been told Ollie has a deletion on one chromosome, and a repetition on another.

‘He was born with a small hole in the heart, a cleft palette, a problem with his pulmonary artery and bilateral talipes, which leaves his feet turned inwards.

‘Doctors can’t give us a diagnosis, or a prognosis, as he is the only person in the world with this condition.

‘But when he’s well, and not in pain, Ollie’s a lovely little soul and even with all his problems, he’s very happy and content.’

The parents, who also have a 10-year-old son called Bradley, enjoyed a normal pregnancy until a 20-week scan revealed abnormalities.

Doctors initially thought the baby may have Down’s syndrome. Although tests ruled this out, medics were unable to explain what was wrong and offered Ms Lloyd a termination.

‘We both wanted our baby so there was no question of us not going ahead with the pregnancy,’ she said.

Ollie’s was born on August 15, 2014 at Furness General Hospital in a traumatic delivery.

The youngster became lodged in the birth canal. Once born, he had been deprived of oxygen and needed to be resuscitated.

Ollie, who was unable to open his eyes or feed properly, spent the first two months of his life being transferred between various hospitals.

It took doctors until the end of that year to identify the genetic abnormalities that were causing his problems.

‘It was a horrendous time for all of us,’ Ms Lloyd said. ‘Seeing him suffer and not knowing what was making his life so tough was just heartbreaking.’ 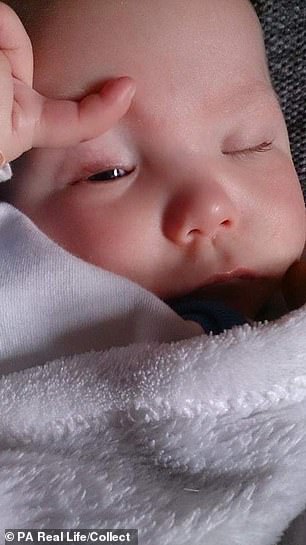 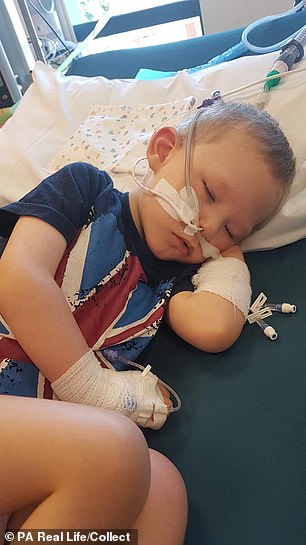 Ollie (pictured left as a newborn) arrived on August 15 2014. The youngster became lodged in the birth canal. Once born, he had been deprived of oxygen and needed to be resuscitated. Since then, the now five-year-old has spent his life in and out of hospital (seen right) 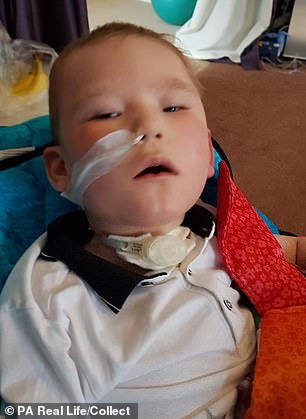 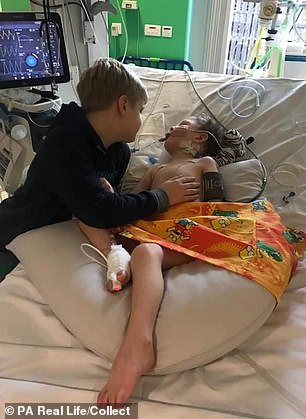 Ollie’s condition is deteriorating as he gets older, which is the opposite of what his parents expected. He is pictured right during a tender moment in hospital with his older brother 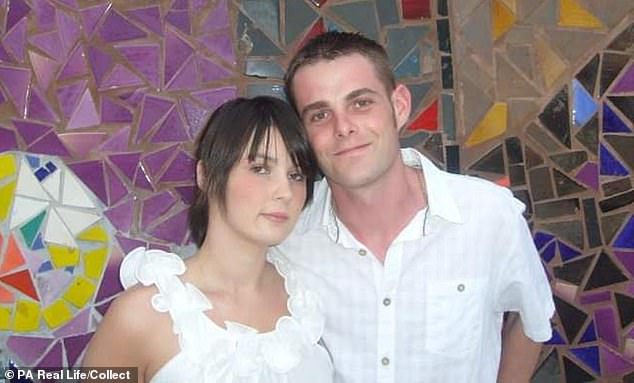 Oliver’s parents (pictured together) enjoyed a normal pregnancy until a 20-week scan revealed abnormalities. Doctors thought the baby may have Down’s Syndrome. Although tests ruled this out, medics were unable to explain what was wrong and offered Ms Lloyd a termination

WHAT IS A CHROMOSOME DISORDER?

A chromosome disorder occurs when there is a change in the number or structure of chromosomes.

In each cell, DNA is packaged into thread-like structures called chromosomes.

Humans have 46 chromosomes, with each cell normally containing 23 pairs.

The 23rd pair is the sex chromosomes, which differ between men and women.

Some chromosomal abnormalities are harmless, however, others lead to disease.

Half of all miscarriages are said to be due to a chromosomal abnormality.

The most severe disorders are caused by the loss or gain of a whole chromosome.

These are usually fatal, with hundreds or even thousands of genes being affected.

Down’s Syndrome is an example of a non-fatal condition that occurs when a person has an extra chromosome in their 21st pair.

If the chromosome affected is small or contains relatively few genes, the person’s developed may be stunted.

Structural abnormalities occur when large sections of DNA are missing or added to a chromosome.

Examples include Prader-Willi syndrome, which comes about when there is a deletion on chromosome 15.

This results in sufferers having an insatiable appetite.

Chromosomal abnormalities occur when there is an error in cell division.

This tends to take place in the egg or sperm, but can happen during embryo development or be inherited from a parent.

The risk increases as a mother gets older.

‘We thought life would get easier [as Ollie gets older], but the opposite has happened,’ Mr Sadecki said.

The youngster was given a tracheotomy in February. This involves making an incision in the windpipe to relieve an obstruction to breathing.

This, combined with a severe epileptic seizure in October 2018, has left Ollie unable to attend the special needs school he went to three mornings a week with his parents.

‘Ollie loves school so it’s a real shame. It feels like we take one step forward and two back all the time,’ Ms Lloyd said.

The ordeal has left Ms Lloyd and her son virtually housebound.

‘It’s the lack of help that’s the real struggle,’ she said.

‘Family and friends try to help out and we’re so grateful to them, but now Ollie has had a tracheotomy he cannot be left with anyone who doesn’t have that specialist training. Only Steve and I have that training.’

With cuts to support services, Ms Lloyd struggles to care for her son single-handedly.

‘Ollie is too big to lift now,’ she said. ‘He needs to be cared for here at home, where we’ve had an extension built so we can look after him.’

The extension was funded by the Local Authority, however, money is still tight.

A family friend has set up a GoFundMe page to raise £10,000 to help them with living expenses.

‘We are both quite proud people, so this wasn’t easy for us to accept,’ Mr Sadecki said.

‘At first, when the GoFundMe page went live, I felt I couldn’t leave the house to go food shopping, because people would think, “Look at him, out shopping and spending money”.’

‘No family in the position we’re in, with such a sick child, should ever have to beg. But I’m so glad we agreed to the funding page, because it really has helped us out a lot.’ 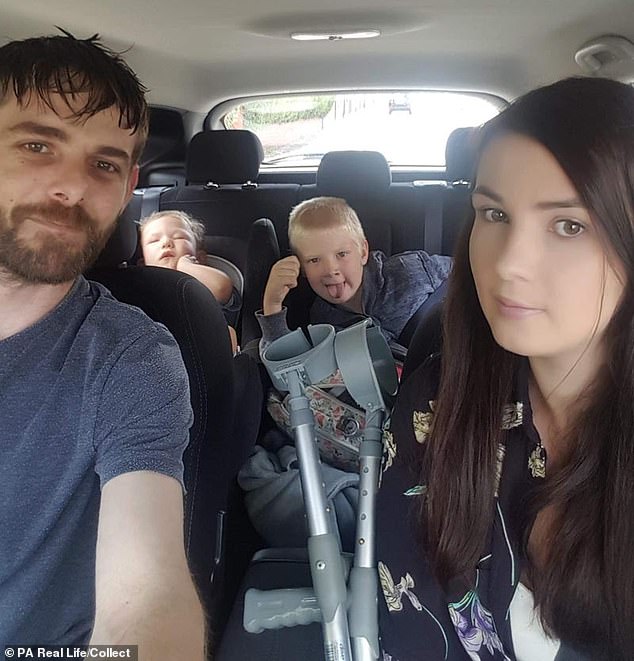 The family are pictured on a rare day out. Cuts to support services mean only his parents know how to cope if Ollie suffers a tracheotomy complication, leaving them virtually housebound 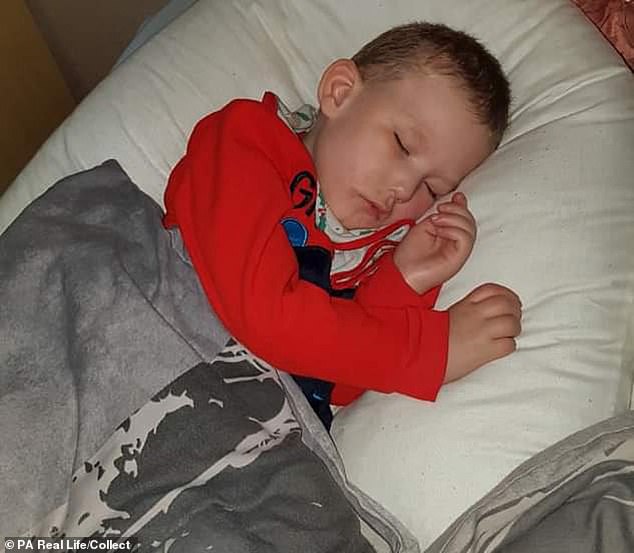