Skip to content
HomeHealth ProblemsWhen you’re sick, the support you’ll get may depend on the ‘worth’ of your disease

The name of an illness can affect the level of care a person receives. Cancer sufferers experiencing fear and uncertainty may have access to cancer care centres. Donations and bequests enable these centres to offer everything from accessible parking, to wig and beauty services, to comprehensive clinical care.

A person with arthritis, on the other hand, may have little access to public services. For instance, there is only one rheumatology nurse for every 45,000 people living with rheumatoid arthritis.

While suffering can be severe across all diseases, access to care is uneven. The hierarchy that determines how little or how much support is available for an illness is known as “disease prestige”.

The idea was introduced in the 1940s and since then a number of researchers have tried to classify diseases on a hierarchy of prestige. The higher a disease is on this hierarchy, the more resources and community support available for its sufferers. The lower a disease, the less resources.

Generally, high-prestige diseases are treated with technically sophisticated procedures, occur in the upper part of the body and often affect young people. Heart disease and childhood cancer are examples.

Low-prestige diseases tend to be vague and difficult to diagnose and treat. Many carry shame and stigma, or are thought to be the “fault” of the sufferer. Examples include urinary incontinence, schizophrenia and liver disease.

Urinary incontinence describes any accidental or involuntary loss of urine from the bladder. It ranges in severity from “just a small leak” to complete loss of bladder control and can seriously affect a person’s well-being. Urinary incontinence affects 13% of men and 37% of women. It particularly affects people after surgery (such as hysterectomy or prostate cancer surgery) and women after childbirth.

Incontinence can be treated and managed. In many cases it can also be cured, but only a third of people who experience incontinence will discuss their condition with a health professional. Like many people with embarrassing conditions, people who have urinary incontinence may keep it secret due to shame.

Despite the fact this condition is common and can be disabling, there is little investment in care. In 2010, the health system invested around A$270 million in urinary incontinence. The remainder of the A$67 billion impact of this disease fell on patients and carers.

Disease champions have targeted such discrepancy in different ways. The Incontinence Foundation, for instance, has used comedians to promote its cause in the “Laugh without Leaking” campaign.

As we move down the hierarchy, we’re more likely to strike diseases with stigma, such as mental illness. Schizophrenia is an illness that disrupts the functioning of the human mind. It causes intense episodes of psychosis, involving delusions and hallucinations, and longer periods of reduced motivation and functioning.

The causes are not clear, but are probably due to a combination of genetic, psychological and social factors. Schizophrenia affects 1% of the population and often begins in adolescence. Despite the fact schizophrenia is common in the community, it is poorly understood and often feared. 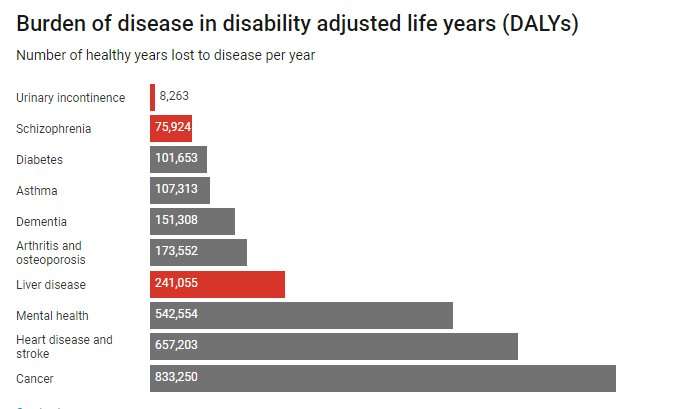 Patients with mental illnesses often avoid disclosing their illness because of active discrimination in the workplace, at home or in institutions, such as insurance companies. Unfortunately, people with schizophrenia can also experience significant stigma from health professionals and can have poor health outcomes with early death from physical illness.

American academic and schizophrenia sufferer Elyn Saks and other high-profile people living with schizophrenia are addressing the stigma, but progress is slow.

We can understand the impact of disease prestige for diseases like schizophrenia by looking at fundraising. The Pink Ribbon campaign for breast cancer has raised an average A$6 million per year. In contrast, schizophrenia, which causes about half the burden of disease of breast cancer, raised A$100,000 last year through SANE Australia. 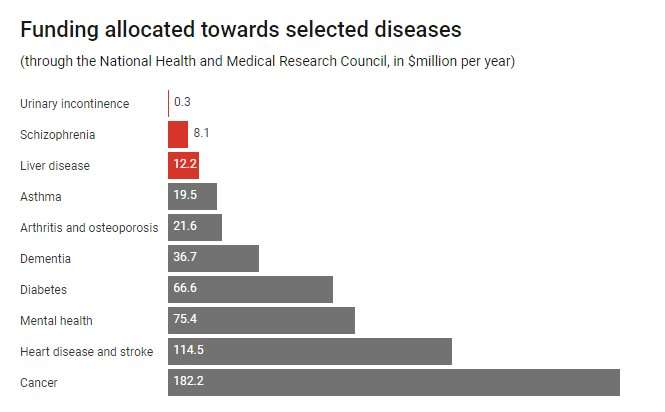 Stigmatised diseases include those that could be influenced by a person’s behaviour, such as cirrhosis of the liver. Cirrhosis is a type of liver scarring which can be caused by excessive alcohol consumption, hepatitis B and C (which can be the result of sexual transmission or drug use), and fatty liver, common in obesity and diabetes. Stigma stops the majority of people living with viral hepatitis enjoying the quality of life they deserve.

However, liver disease can also occur in children. Liver transplant is the only treatment available for children with severe acute liver failure or chronic end-stage liver disease, certain metabolic diseases and some liver cancers. In 2012, there were more than 6 million Australians living with liver disease and more than 7,000 deaths due to liver disease in Australia. However, Commonwealth research funding is low. 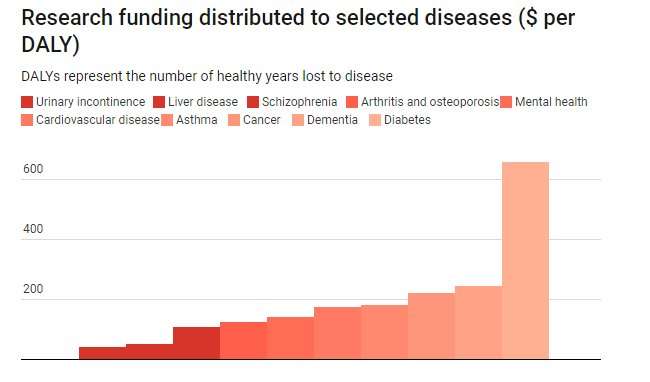 Research funding from Commonwealth sources, such as the National Health and Medical Research Council (NHMRC), follows the disease prestige hierarchy. Burden of disease can be measured in DALYs (Disease Adjusted Life Years), a way of quantifying the healthy years lost to disease.

If we compare the research investment across the national health priorities, we see each year of healthy life lost attracts different levels of investment, depending on the disease involved. The Medical Research Future Fund may extend this discrepancy, with almost half of its initial investments being earmarked for cancer research.

The following graph shows the National Health Priority diseases, as reported by the NHMRC, and maps the research investment per DALY. We have calculated the investment for the low-prestige diseases by searching for grants allocated from 2010-2016 that mention liver disease, schizophrenia or urinary incontinence.

Tags:depend, disease, Get, may, of, on, sick, support, the, When, worth, you'll, you're, your
Related Posts